What type of mathematics is posed in the movie “A Beautiful Mind”?

There is a scene in the movie "A Beautiful Mind" in which John Nash is talking to his friend Charles in Princeton Library. Nash shows Charles three pieces of mathematics - drawn on the windows - that describe a touch football game, a flock of pigeons and a woman getting her purse stolen. Below are two recreations of the drawings from the movie. The first is of the pigeons and the second the stolen wallet. 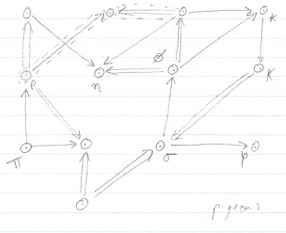 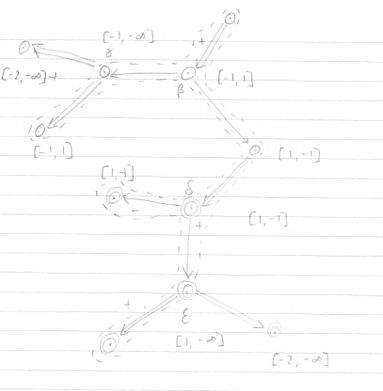 Initially, is this even real mathematics? If it is what part of mathematics is it? I have a feeling its to do with game theory but everything I thought of searching has brought nothing vaguely similar to this. Can you suggest some key words I could search to find similar mathematics?

David Bayer, the mathematical consultant of "A Beautiful Mind" talks about those drawings in an interview with Burkard Polster and Marty Ross, on page 26-27 of their book "Math Goes to the Movies", Johns Hopkins University Press (2012), 304 pages.

In summary, he says that the drawings are quite literal schematic representations of the stories that the John Nash character was telling in that scene. In his own words "I struggled with it [making up the math that would accompany that scene] [...] an it would ruin a day's filming if I didn't do something [...] And ultimately I ended up actually writing out a storyline for myself of what was taking place. I started translating it into graphs and then I started putting values like I was writing a game theory puzzle on the graph. And even thought I don't know of game theorists doing exactly this to such a storyline that was the basis for my drawing."

Not the answer you're looking for? Browse other questions tagged game-theory mathematicians or ask your own question.

3
Doubts on the mathematical content of the Hitler Downfall Meme.

2
A Special Type Of Guess The Number Game
3
Is the Nash Equilibrium example in a “Beautiful Mind” accurate?
14
What is the most influential work of Grothendieck in mathematics?
1
What kind of mathematics is required by game theory?
2
What is the name of this game?
3
What is the best strategy for the following game?