Greatest number of non-attacking moves that queens can make on an $n \times n$ chess board.

I'm trying to extend my OEIS sequence A275815: Maximum total number of possible moves that any number of queens of the same color can make on an $n \times n$ chessboard.

I have computed the first five terms by brute force, and examples of each are given below.

For $n \geq 6$, Alec Jones has conjectured that $A275815(n) = 8(n-2)^2$, which is achieved by placing $4n - 4$ queens around the border of the board—but this has not been proven. Alec's heuristic is based on summing the number of queens that can move to each empty square (which is no more than 8) instead of summing the number of moves each individual queen can make.

Any thoughts on how to begin to prove this conjecture? 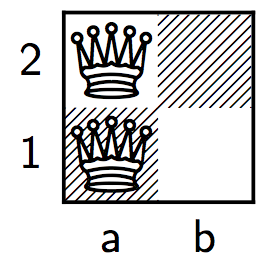 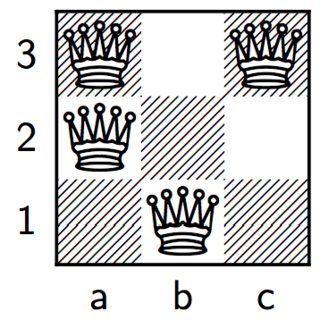 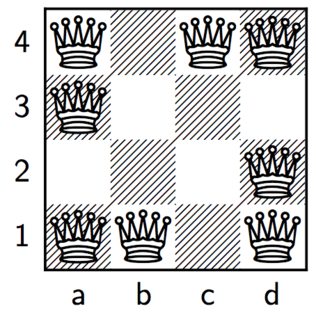 The main idea is to look at the queens in each row/col/diagonal and to show that if the arrangement doesn’t satisfy certain properties, then we can locally improve the arrangement, by which I mean that we will find a different arrangement that is not worse. The second key idea is that sometimes, it’s hard to locally improve an arrangement. However, you can then overestimate the score (the score is the number of non-attacking moves) for each arrangement so that the best arrangement has the same score, but in a way that each non-maximal arrangement can now be improved.

There are 3 operations we can apply on a queen in a row/column/diagonal, which we call a slice.

(a) It is sandwiched between 2 queens (not necessarily directly) and we delete it.

(b) It is the last/first queen in that slice, we delete it and add it to its end of the slice.

(c) It is the only queen in that slice, and we delete it and put 2 queens on both ends of that slice.

These operations can be applied simultaneously on a single queen along different slices in the natural way.

Lemma. We can assume there is no row or column with only one queen (or else we can improve the arrangement).

Now, suppose we have a queen not at the edge of the board. (a) always increases the score by 2. For (b), we have a few cases.

With all the cases (note that we didn't need to consider slices that were non-short/long diagonals), we see that we can apply the operations to any queen in the middle to push it to all the edges without worsening the score. But from the Lemma, there’s at least 2 in each row/col, so the whole border except for the corners have queens in them. From there, it is clear that filling in the corners improves the (new) score. So for n sufficiently large, the best is to have all queens along the border, for a total of $8(n-2)^2$ (which has the same score in both systems).

I investigated a similar problem a few years ago as part of my effort to archive the Enigma puzzles from New Scientist magazine.

Enigma 69 (from July 1980) is about determining the maximum number of moves on a 4×4 board, using the minimum number of Queens. The puzzle text implies that the "border configuration" is known to be optimal for an 8×8 board.

I recently revisited this puzzle and refined my algorithm to allow me to fully investigate the 6×6 board, and I can confirm that the maximum number of moves in this case is 128 with 20 Queens (using the "border configuration").

It's worth noting that although 40 moves is indeed the maximal solution for the 4×4 board, it can be achieved with only 6 Queens (it is also achievable with 7 and 8 Queens).

While still being brute force, turning this problem into an integer linear programming problem can fill the gap up to "sufficiently large".

Here is python3 code using the PuLP library (the relevant package is called python3-pulp on debian) that confirms the conjecture for all $n<25$ in less than a minute. It can go higher if needed.

If you want to minimize the number of queens as secondary optimization goal, use something like n**2*lpSum(reach)-lpSum(queen) as objective function.

I'm sorry for responding with a non-encompassing answer, however I do have a few observations I'd like to share:

Mr.Jones' conjecture considers most scenarios but I believe by placing a queen in the center (as that location will not be covered by all eight directions) will net more host locations due to the queen covering 2(n-1) - 4 locations (2(n-1) is the diagonals un-covered by the queens from that direction and thus earned, the minus four is due to the queen covering four queens' ability to host on the center, and 2(n-1) > 4 when n > 3 so placing a queen on the center will be better thus the equation should be: 8(n-2)^2 + 2(n-1) - 4 if n is odd (as if not the center is four locations thus the situation is wildly different).

Other things that may help: Relative to the center, any queen placed on a location will net 4(n-1) - 2(x) where x is the distance the queen is from the center.

I'm sorry if I didn't explain this well, I hope it helps.

Edit: I'm not sure if I'm breaking a code here, as this observation is not an answer and more a comment, I can't place a comment due to being a novice and I'm unable to find a way to contact you other than posting here, if I'm out of line please inform me and I'll delete the comment, thank you for your time.

If you can't brute force a solution for n, maybe you could guess an optimal pattern for n based on the solution of n-2, and check it via brute forcing for a similar number of queens to see if there are any better ones.

Not the answer you're looking for? Browse other questions tagged sequences-and-series combinatorics puzzle oeis chessboard or ask your own question.