How do you find the center of a circle with a pencil and a book?

Given a circle on a paper, and a pencil and a book. Can you find the center of the circle with the pencil and the book? 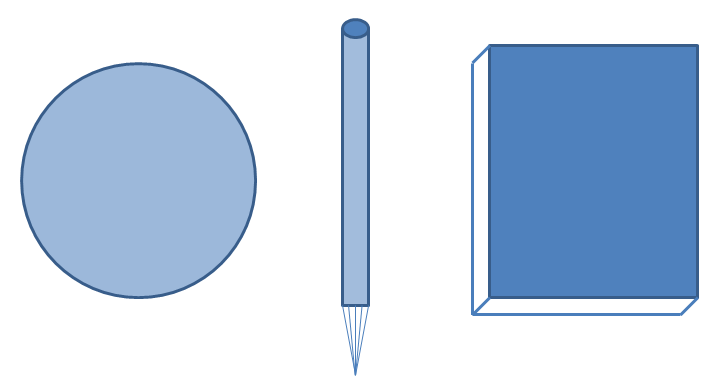 Let the corner of the book just touch the circle's edge. You can draw two perpendicular lines along book's edge which intersect with the circle at two different points. Connect the two points and it's a diameter.

Repeat this and get another diameter. The intersect of these two diameters is the center of the circle. 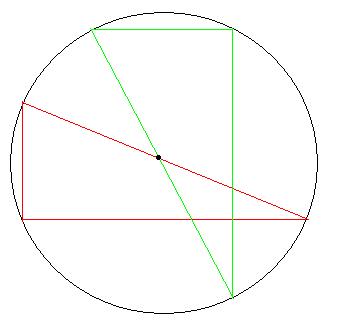 Not as simple as the accepted answer, but you have another solution: 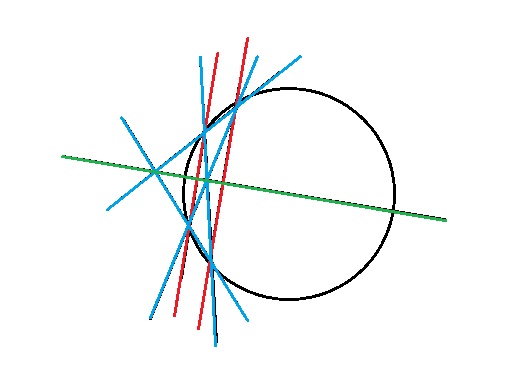 If the circle is a foldable material (like paper), you could fold it in half twice, the intersection of the folds will indicate the center.

As pointed out, most of these answers will not work if the circle is much larger than the book. Instead, find someone with the proper size compass and straightedge, T-square, or other drafting tools, and threaten to hit them with the book if they do not find the center of the circle. See BAROMETER

Meanwhile, what is actually at stake here is Poncelet-Steiner

Assuming the paper contains nothing but the shape of the circle: 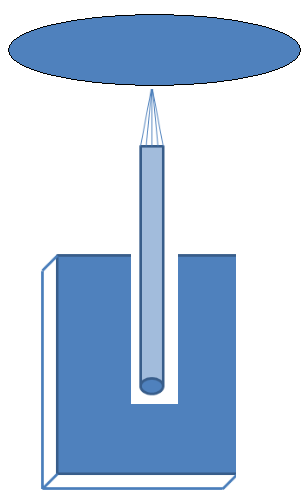 The only book I have is usually under my pillow. It has become skewed over the years - no 90 degrees joy. As a consequence I failed to have success applying the (elegant) description of Patrick Li. Moreover, my book is too small anyway to connect diametrically opposing points on the circle.

Therefore I had to revert to a more tedious approach.

Pick two points on the circle, close enough for my book's reach, connect them. Align one of the book's edges with that line, the bookcorner at one of the marked points, draw a line along the adjacent edge of the book - which is non-perpendicular to the first line. Flip the book and draw "the other" non-perpendicular line through the same point. Repeat at the other point. Connect the two intersections that the four lines make, and extend this line - by shifting one bookedge along - to complete the diameter. If the intersections are too wide apart for my book, retry with the original points closer together. Repeat all of this with two other points on the circle, to get two diameters crossing at the midpoint.

If, by some miracle, my book has straightened out again (but still is tiny compared to the circle), I will quickly find out: the two "non-perpendicular" lines at one of the initial mark-points overlap. Then, I continue the line(s) until I cross the circle at the other side; likewise at the other initial point, and I wind up with a long and narrow rectangle. Repeating that from some other location on the circle, roughly at 90 degrees along the circle from the first setup, I get two rectangles and their intersection is a small parallellogram somewhere in the middle. It's diagonals cross at the center of the circle.

Draw a right triangle inside the circle, making all vertices touch the circle.
Transform it into a rectangle.
Draw a line joining the opposite corners and you will have obtained the center of the circle 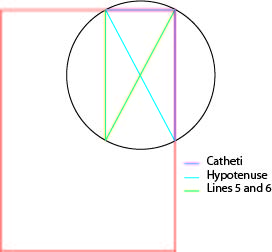 The pencil nor the book are necessary.

Given a circle on a paper

You do the following

Another way to solve the problem is to pick 3 distinct points on circle say A, B, C. Then connect AB and BC. Halve A-B and B-C to obtain D and E. Draw lines through D and E perpendicular to AB and BC. The intersection of these lines will be the centre of the circle.

1> Place your sheet of paper on top of the circle so that the corner just touches the circle's edge. Hold the paper in place, and use a pencil to make a small mark at the exact point where the two edges that meet at the corner cross the perimeter of the circle.

2> Using a ruler or straightedge, draw a straight line from one mark to the other.

3> Place the paper on the circle again with a different orientation. Make the tick marks again and connect these marks with a second pencil line using the ruler or straightedge. The center of the circle is the point at which this line crosses the first line you drew.

Using Thale's theorem and assuming that the corner of the book is 90°:

Hang the circle by its top edge on a wall close to a door or corner, draw a line straight down using the book's edge parallel to the door/corner edge. Rotate the circle f.ex 90 deg., draw a new line and you have the center and radius. This technique can also find the center of more complicated shapes. Gravity is the keyword here.

Then angle ADB is twice angle ACB. I won't provide the proof. Actually it depends on whether C is between A and B or outside it. The theorem is still true but you also need to compute the angle ADB appropriately.

Now, a diameter is a point where the angle of ADB is 180 degree. That means we need to find a point where angle ACB is half of it namely 90 degree.

We do not know what ADB is. However, 180 degree is simply a straight line. So if we draw a line between A and B, then D must be there.

If D is not on that straight line, then angle ADB won't be 180 degree. That's because the triangle ADB won't be "trivial". That means angle ABD and BAD won't be 0. By sum of angles in triangles, non zero angles of 2 of the angles in a triangle imply that ADB is not 180 degrees. Hence, we can conclude that point D is in a point AB. That means point AB is essentially a "diameter". It's a line that goes to the center of the circle.

Now repeat the process and draw a bunch of diameters. Of those diameters will intersect at some point.

That point is D, which is your center of the circle.

Follows from the basic fact that any tangent line to a circle is perpendicular to the diameter that goes through the same point (and also from the fact that a standard book is rectangular in shape).

A silly answer, im joining to math.stackexchange.com only to answer this, but it may help!

Not the answer you're looking for? Browse other questions tagged recreational-mathematics circles puzzle or ask your own question.

2
How do I find the center of a circle on a rectangular piece of paper?