Consider a setup where we have two cameras as described below in the image: 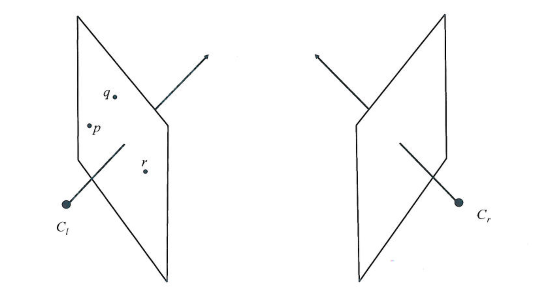 There are 3 points p,q and r in the left camera's image plane. If we find the epipolar lines in the right image plane, would they intersect at some point?

I think the answer is yes they would intersect and the reason is that all three points use the base line (vector from $C_l$ to $C_r$) in the epipolar plane which is formed using the vector from the camera to the point in the image plane.

Since they share the same base line, each epipolar line would pass through the "edge" of the image plane and that is where they would intersect.

Is it possible that they won't intersect , if so why?

They will intersect. In fact, all epipolar lines intersect at the epipole.

Not the answer you're looking for? Browse other questions tagged geometry computational-geometry plane-geometry or ask your own question.

1
Deriving an expression for an epipolar line
11
Find whether two triangles intersect or not in 3D
15
If a plane is divided by $n$ lines, then it is possible to color the regions formed with only two colors.
1
Do collinear lines or overlapping collinear line segments intersect?
0
I have a hard time understanding this simple theorem: “If two lines intersect, then exactly one plane contains the lines.”
3
Transform camera plane to real world plane using matrix
3
Bounding points by lines