Passing an ellipse through 3 points (where 2 two points lie on the ellipse axes)? [Updated with alternative statement of problem and new picture]

Given three points $P_1$, $P_2$, and $P_3$ in the Cartesian plane, I would like to find the ellipse which passes through all three points, subject to the following constraints: 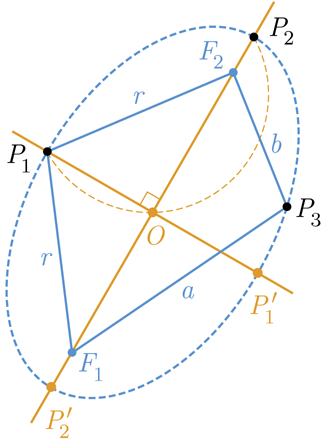 Here’s what I know

How can I find the unique ellipse that passes through three distinct points P₁, P₂, and P₃, such that P₁ and P₂ lie on the axes of the ellipse, and such that P₂ is closer to P₃ than it is to P₁? (P₃ could also lie on the same axis as P₁ in the simplest case, but won’t it ever lie on the same axis as P₂ because the points are distinct.) More specifically, what I want to find is actually the angle θ with which the axis coincident with P₁ is rotated with respect to the x-axis, because this will tell me the angle of the line of tangent at P₂, which is what I’m ultimately interested in.

This is not homework. This is for piecewise (local) curve-fitting of an arbitrary collection of points, where the fitted curve passes through each point using cubic Bézier curve segments. For every triplet of consecutive points, I want to pass an imaginary ellipse through the points, with the middle point (e.g., P₂) provides a pleasing tangent line from which to derive a pair of Bézier control points. This will provide C₁ continuity in the final curve. 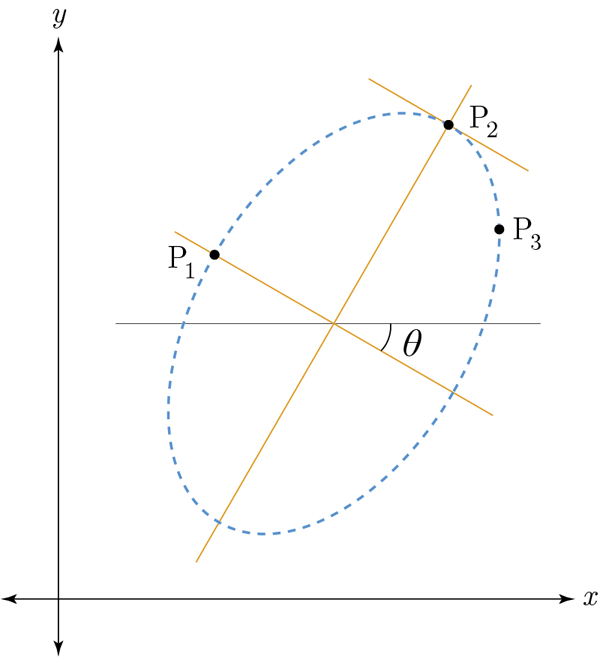 Approaches I have tried so far

I’m out of ideas. I would think the solution is actually probably rather simple, perhaps involving a few inverse sines or cosines and a square root or two. I haven’t been able to find this particular problem stated anywhere (and therefore no conveniently packaged solution), but I’m sure it can’t be all that unusual.

I did have the idea to take my first partial solution (listed above) and do some sort of iterative binary search for $\theta$ (trying different values until the curve passes through $P_3$), but I am much more interested in a closed-formula solution, because this will be executed in a loop over hundreds or thousands of point sets.

Why not simply use an approximation, after all you will use the ellipse itself as an approximation only? If $M$ is the middle between $P_1$ and $P_3$, assume that the tangent at $P_2$ should be orthogonal to $MP_2$.

I think I found an answer: I called it the 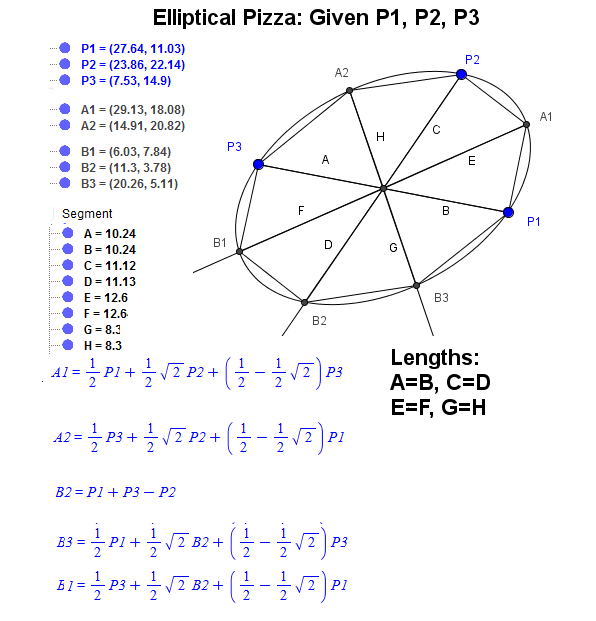 ]2 , once you find 2 additional points using the formulas you find the conic through 5 points as here Conic through 5 points. Technically to be exactly like the submitter's drawing you would know what I call A1 and P1 would be unknown but it's the same system of equations ...

I posted it on my blog here: Elliptical Pizza on Ben Paul Thurston Blog

Actually I was suggesting my above answer to the people at geogabra and they told me about this nice parametric equation that only needs the center point and any 2 points on the ellipse, where A is the center: f(t)=A+(B-A)*sin(t)+(C-A)*cos(t) 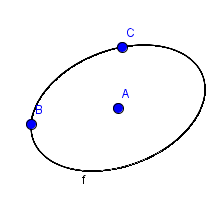 Not the answer you're looking for? Browse other questions tagged conic-sections bezier-curve or ask your own question.

10
How to find an ellipse, given five points?

5
Ellipse with non-orthogonal minor and major axes?
0
Find intersections of two ellipses who share one fixed point
0
Find normal to ellipse through arbitrary points
4
If A represents area of ellipse $3x^2+4xy +3y^2=1$ then the value of $\frac{3\sqrt{3}}{\pi}A = ?$
5
A circle has the same center as an ellipse and passes through the foci $F_1$ and $F_2$ of the ellipse, two curves intersect in $4$ points.
2
How did length of base polyline relate with length of Bézier curve?
1
Find the angle of rotation and minor axis length of ellipse from major axis length, center, and two points?
4
Finding center and rotation angle of ellipse that contains three points
3
Is it always possible to draw an ellipse given any two points and the center?