So I have the following problem:

a) Test this hypothesis with a level of significance of α = 0.01

Did you figure out this problem?

Part A) Use a T-test in the graphing calculator

If |t| > t-critical, you can declare statistical significance and reject the null hypothesis

Obviously, 27463 < 28000. The question is whether it is enough smaller that we shouldn't ascribe the difference to random variation. The answer (from the one-sided 99& CI) is that any sample mean below 27980 would be significantly smaller.

Power computation for specified alternative. Minitab's 'power and sample size' procedure uses the noncentral t distribution to find power given $n,$ the direction of the test, the difference between null and alternative values, the significance level, and (an estimate $\hat \sigma = 1348$ of) of $\sigma.$ The Type II Error probability is 1 - Power, so the probability of Type II error is about 0.123.

Power computations require a population variance, or at least the speculation of one. Usual practice is to use a sample variance as an estimate if one is available. If the true mean endurance of a tire is as low as 27,230, using data from 40 tires gives us a pretty good (approx. 88%) chance of detecting that the claimed 28,000 is an exaggeration. (Notice that the difference between $\mu_0$ and this $\mu_1$ is more than a couple of standard errors.) 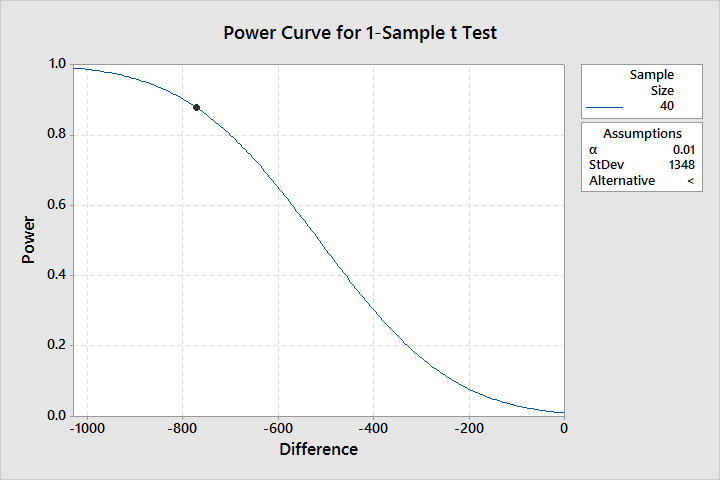 Not the answer you're looking for? Browse other questions tagged statistics hypothesis-testing or ask your own question.