I saw this question today, it asks how many triangles are in this picture. 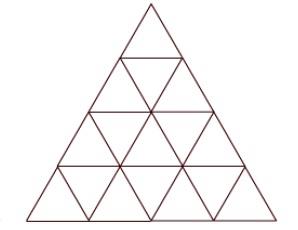 I don't know how to solve this (without counting directly), though I guess it has something to do with some recurrence.

How can count the number of all triangles in the picture ?

Algebra beyond this point corrected.

The total number of downward-pointing triangles is therefore

Set $\displaystyle m=\left\lfloor\frac{n}2\right\rfloor$, and this becomes

The final figure, then is

Let $u(n,k)$ denote the number of upwards-pointing triangles of size $k$ included in a triangle of size $n$, where size is a short term for edge length. Let $d(n,k)$ likewise denote the number of down triangles. You can tabulate a few numbers to get a feeling for these. In the following table, row $n$ and column $k$ will contain two numbers separated by a comma, $u(n,k), d(n,k)$.

Using these rules, you can extend the table above arbitrarily.

The important fact to note is that you get the same sequence of $1,3,6,10,15,21,\ldots$ over and over again, in every column. It describes grids of triangles of same size and orientation, increasing the grid size by one in each step. For this reason, those numbers are also called triangular numbers. Once you know where the first triangle appears in a given column, the number of triangles in subsequent rows is easy.

Looking up the sequence

Now take that sum column to OEIS, and you'll find this to be sequence A002717 which comes with a nice formula:

There is also a comment stating that this sequence describes the

Number of triangles in triangular matchstick arrangement of side $n$.

edit: I tried to write this as a generalization of the simpler case of counting the small triangles, but clearly didn't anticipate the problems that would arise. My proposed solution doesn't work, as it counts straight lines as well as triangles. It can be corrected in a number of different ways, but this just complicates a method which is already inefficient.

Label each corner of each triangle and consider them to be nodes on a graph. You can then write the adjacency matrix for that graph. Because the graph has such a regular structure, the matrix can be worked out easily enough, and scales up nicely. IMPORTANT: two nodes are "adjacent" if they are connected by a straight line, not just a line segment.

From there, you just need to take the trace of this matrix, and divide the result by six (since each triangle is counted six times; twice for each corner.)

edit: divide by six, not three.

Assume $n=2m$, and let us add a $(2m+1)$'th row of triangles at the bottom. Then each "old" triangle will appear in $T_{2m+1}$, furthermore each "old" gridpoint is a vertex of a triangle with base at the bottom of the new figure, and finally the new bottom gridpoints $z$ serve as vertices of new bottom-up triangles whose sizes are between $1$ and the distance of $z$ from the lower corners of the figure. It follows that

and similarly we obtain

A lot of complicated answers for a simple problem. That's fine, but we're just trying to solve this simple problem here, not the full generalization of it. Just go by size.

Not the answer you're looking for? Browse other questions tagged combinatorics puzzle recreational-mathematics or ask your own question.