Alice and Bob are flipping coins…

Alice and Bob are playing a game. They randomly determine who starts, then they take turns flipping a number of coins (N) and adding them to a growing pile. The first one to collect their target number of tails (T) wins.

Alice's chances of victory appear to be slightly lower than 50%. This is based on running a few hundred thousand simulations of the game in Python. This outcome is, unfortunately, unintuitive to me. What is the mathematical reason for it?

Note: This is a specific example chosen to highlight an issue I'm having in a more general problem. In the general problem, the players each have: Odds of an attempt getting them a point (O), number of attempts they get to make on their turn (N), and total number of collected points needed to win (T). If someone could also provide an equation that predicts the probability of Alice or Bob winning, given $O_{A}, N_{A}, T_{A}, O_{B}, N_{B}$, and $T_{B}$, I would be grateful.

You're right! This is rather non-intuitive.

Since the player who starts is chosen at random, we can ignore this in our calculations since it will average out (you can show this more formally).

For your problem I have plotted these probabilities for turns 1 through 30. 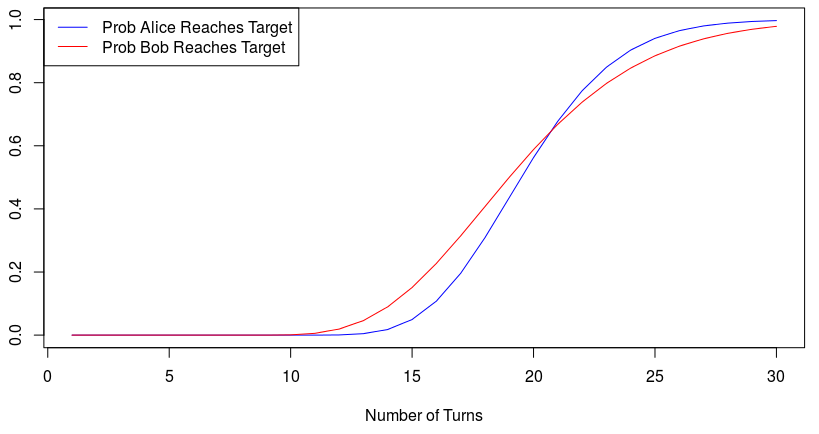 UPDATE: We can actually derive an equation for P(Alice Wins). Since it is in terms of the Binomial CDF it has to be computed numerically, as the Binomial CDF depends on the Incomplete Beta Function.

Let's break it down.

I skipped the details, but the above is due to the fact that we can write what we want in terms of $A_{j-1}$ and $A$ (instead of $_j$), and these variable are independent.

Indeed for the problem you described above, we see that Alice has only a 46.32907 % chance of winning. If you want to see more details, or play around with different values, the R-code which calculates the equation I've just described can be found here.