Use of t-distribution for confidence intervals and tests

The question is in the image above.

Part b is what I'm having trouble understanding the answer to.

I thought that because $n$ is small, we cannot use $S$ as a good estimate of $\sigma.$ (We could use $S \approx \sigma,$ if $n$ is large). Therefore we must use the t-distribution:

Can someone clarify whether I should use the t or normal distribution? Thanks!

Your analysis seems to be correct, insofar as I can check it without re-computing $\bar X$ and $S$.

Whenever $\sigma$ is unknown and estimated by $S,$ you should use the t distribution. If you were testing at the 5% level with more than $n = 30$ observations, then critical value from standard normal and $T(n-1)$ would be similar (both near 2.0). But at the 1% level, $n$ has to be more like 60 or 70 for the two critical values to be approximately the same (both near 2.6). [In my view, the "rule of 30" (incorrect except near the 5% level) is confusing and out-of-date in our age of statistical software.]

Below is a printout of this one-sample t test from Minitab. Note that $\sigma$ is unknown and that the software prompted me to enter its estimate $S.$

Note: If you have further questions about the distinction between z tests and t tests, please leave a Comment. I will check back in several hours.

Addendum on Power: The power of a test for a particular alternative value $\mu_a$ of the population mean is the probability of rejecting $H_0$ given that $\mu_a$ is the correct value. The computation requires you to specify the significance level (here 1%) and to guess $\sigma$ (I used $S$ as my guess). Here is output from Minitab's 'Power and Sample Size' procedure; other statistical software packages have similar procedures--all of them based on the "non-central" t distribution.)

So, unless the difference between $\mu_0$ and $\mu_a$ is as large as 2 units, you have less than a 90% chance of detecting that difference. The larger the difference, the surer the rejection. Below is a 'power curve' from Minitab. (To be fussy, one point on the 'power curve' is not a power value; it is the height of the curve at 0, which is the significance level 1% = 0.01. Perhaps a better lable for the vertical axis would be "Probability of Rejection.")

Just to show the effect of a larger sample size, I added a second power curve (not mentioned in the printout above) for $n = 36;$ three times as much information, higher power. 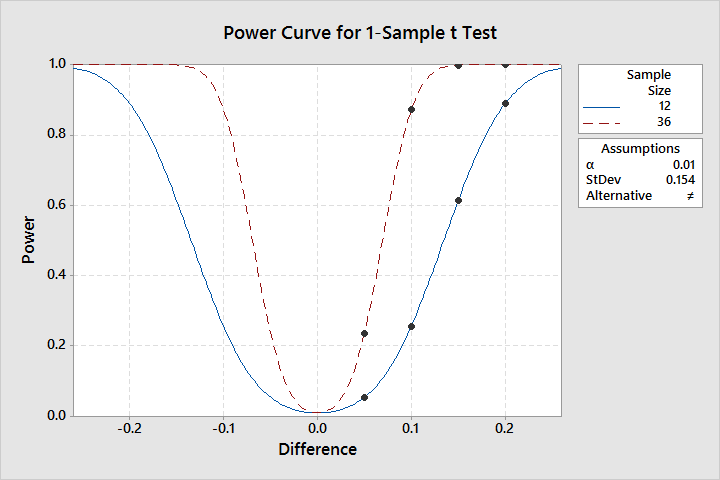 Hote: I realize that this whole technical discussion of 'power' may be a step beyond where you are prepared to go right now. But you asked, so I tried to give a reasonably complete answer. Try to get what you can from it.

Not the answer you're looking for? Browse other questions tagged statistics probability-distributions normal-distribution standard-deviation hypothesis-testing or ask your own question.

1
Calculating 95% confidence interval for mean for a normal population
0
computing p-value with small n
3
Confusion - Am I on the right track on this power computation?
0
Solution verification for hypothesis testing and confidence interval problem
1
Error probability of Type I and II
2
Tutors correcting tests - Confidence intervals
1
Null Hypothesis: Is it being rejected?