In the card game Set, what's the probability of a Set existing in n cards?

Given $n$ randomly drawn Set cards on a table from a standard 81-card deck, how can I determine the probability of one or more Sets existing on the table?

First, for those who may not be familiar with the game, here's a simple introduction to Set (see setgame.com), which lends itself to some straightforward mathematics: there are four properties of the symbols on each card. Each property has three states, resulting in $3^4$ or 81 possible symbols. Each of the 81 cards is unique.

The properties are as follows: Number, Shading, Color, and Shape.

Hence the following are Sets:

And, just for kicks, the following is not a Set:

The game is played by one or more players placing twelve cards (random, from a shuffled deck) face up on a flat area. When a player sees a Set, s/he calls "Set" and indicates the three cards, collects them from the table, and the dealer replaces them. When the deck runs out, and no more Sets are possible, whoever has the most Sets wins.

Hopefully you have the gist of it now. Here's the question again, in light of the rules: given a shuffled 81-card deck, when you lay out $n$ cards face up on a table, what is the probability of a Set existing on the table?

I have been able to figure it out to five cards, but past that, I get lost. I'll post what I have in an answer, because it's part of the answer, but what I really want to know is whether there's an easier way to do it. Otherwise it could take me a long time, no kidding.

It turns out that Don Knuth wrote programs to compute these values in 2001. The WEB programs are available here, and a WEB-to-C compiler is available here (it worked out of the box on my Mac). I ran the faster of the two programs, setset-all, in which Knuth used a much larger isomorphism group to make use of the symmetries. It only took a couple of minutes to complete on my Mac. Here's the output:

Dividing by $\binom{81}n$ and subtracting from $1$ yields the following proportions of sets with Sets:

This is not the full answer; I'm only posting it to show what I've tried to do so far. I'd like to know whether there's a pattern I can follow or whether there's at least an easier way to do it.

Here's what I have so far:

I realize that when you take two Set cards, they inexorably point to one and only one other card in the deck to complete the Set. For instance, if you have Two Lined Purple Diamonds and Three Solid Purple Squiggles, the third card must be One Open Purple Oval. So when I take two cards from the deck and lay them on the table, only one out of the remaining 79 cards will create a Set. This must be true with any selection of three cards. So the probability of a Set existing in 3 randomly selected cards is $\frac{1}{79}$ or ~$1.266$%.

For the fifth, assuming that the previous four did not contain the Set (which is true $\frac{75}{79}$ of the time) I was tempted to simply look at the remaining 77 cards, imagine that 6 of them will fit with the four on the table (since there are 6 possible combinations of two cards in a group of four), and spout the number $\frac{6}{77}$. So it would be $\frac{1}{79}+\frac{78}{79}\cdotp\frac{3}{78}+\frac{78}{79}\cdotp\frac{75}{78}\cdotp\frac{6}{77}$. But that's not the case. I thought about it, then realized that sometimes, four cards can consist of two groups of two cards, each group of which points to the same third card to complete the Set. I had stumbled on the possibility of intersecting Sets. There is a name for four cards which would be intersecting Sets given the correct fifth card: it's called a MetaSet. It's handy that it's been christened, since the concept appears to be a prominent one in my subsequent calculations.

Here's an example of a MetaSet just in case I wasn't clear: One Solid Purple Squiggle, One Lined Green Squiggle, Two Open Red Diamonds, Three Open Red Ovals. The first pair of cards point to One Open Red Squiggle, and the second pair points to One Open Red Squiggle. So for some combinations of four cards which do not contain a Set (namely, MetaSets), only five of the remaining 77 cards will create a Set when placed on the table with them.

But when there is a MetaSet:

Since (a) takes the place of two cards, there are only 5 cards in the remaining 77 which will create a Set when one is placed with the four on the table.

So we have established that there are three cards (a) (b) (c) in the reminaing 78 which will create a Set with the three on the table, and three other cards (A) (B) (C) which create a MetaSet. So the chance of four cards containing a MetaSet at this point is $\frac{3}{78}$.

To try to wrap this monster up: 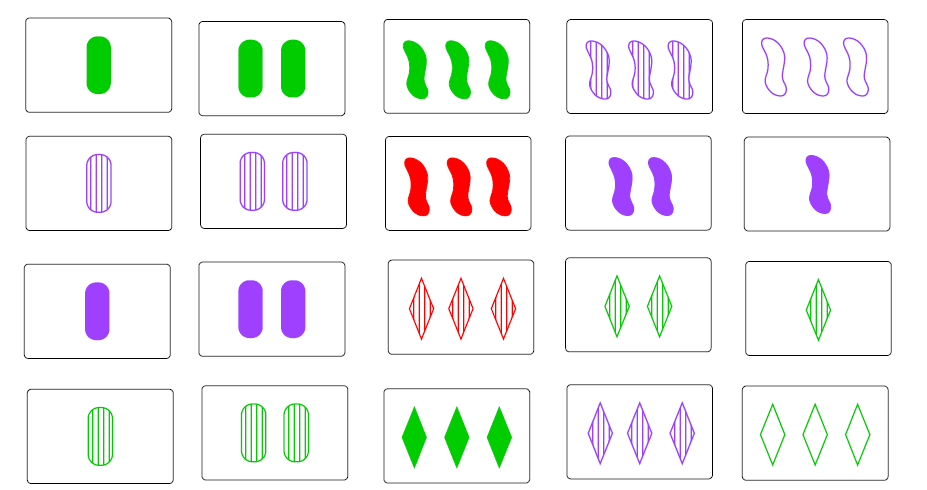 My eventual goal is to list all the fractions and percentages of the chances of having a Set in 3 cards, 4 cards, 5 cards, all the way up to 20, past which I know it's 100%.

For what it's worth, this was the topic of an AMS feature column by David Austin that was posted on the site in August 2015.

You can find a fair amount of information there, as well as the results tabulated by Knuth.

Not the answer you're looking for? Browse other questions tagged probability combinatorics card-games or ask your own question.

10
On the probability of obtaining 27 sets in the card game Set
1
Hitting a line in a $d$ dimensional cube
0
How can I figure out the total solutions in this Combinatorics problem?
0
Pigeon hole problem for custom deck of cards