The union of Edge sets of distinct $u - v $ Path must contain a cycle.

The solution goes here and i have doubts in many points-:

We use induction on the sum $l$ of the lengths of the two paths, for all vertex pairs simultaneously. 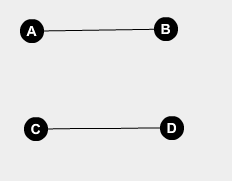 Here $AB$ and $CD$ are cycle Am i getting it right?

If P and Q have no common internal vertices, then their union is a cycle. (same as above figure)!!

Am i right there ?

Please help me out !!

The main problem here is that your picture is wrong. Below I’ve drawn two pictures that I’ll use to try to explain the argument. 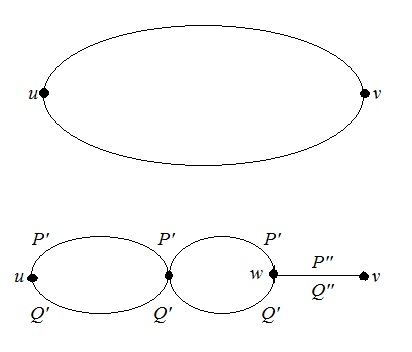 The top one shows the situation when $\ell=2$: there are two edges between $u$ and $v$, and between them they make a loop. In this case the graph cannot be simple: assuming that $u\ne v$, this is the only way for the sum of the lengths of $P$ and $Q$ to be $2$.

If $P$ and $Q$ actually have no vertices in common besides $u$ and $v$, we can use the top picture as a schematic. Instead of showing the actual relevant part of the graph, it shows a sort of outline of the relevant part: the upper and lower arcs of the oval represent the paths $P$ and $Q$ without showing any of their internal detail, and of course $P$ followed by the reversal of $Q$ forms a cycle containing $u$ and $v$.

If $P$ and $Q$ do have at least one internal vertex in common, we use the bottom picture. It’s also a schematic, not (part of) the actual graph. It shows the vertices $u$ and $v$. The upper halves of the two ovals together with the straight line segment represent the path $P$ from $u$ to $v$, and the lower halves of the ovals together with the straight line segment represent the path $Q$ from $u$ to $v$. As I’ve drawn it, the two paths $P$ and $Q$ have some vertices in common besides $u$ and $v$: the unnamed vertex between the two ovals, the vertex $w$, and all vertices along the path represented by the straight line segment. This is of course just one of many possibilities, but it’s general enough to show the main ideas.

In every case, then, the union of the edge sets of $P$ and $Q$ contains a cycle, and the induction step is complete.

Not the answer you're looking for? Browse other questions tagged discrete-mathematics graph-theory proof-explanation or ask your own question.

2
Prove that $G$ is $k$ connected iff for each 2-vertex $T \subset S$, there is a cycle of $G$ that contain both vertices in $T$
1
Arguing that Graph, $G$, is 3 regular and pairwise edge-disjoint path can't share internal vertices
2
Petersen graph has no cycle of length $7$
0
Proof closed walk with no repeated edges must contain simple cycle
1
How to demonstrate every vertex N and edge(U,V) belong to common cycle?
0
Why is there a distinct fundamental cycle for each edge not in the spanning tree?