I was told isomorphism was when two graphs are the same but have different forms. In order for it to be the same two vertices must be adjacent across the graphs. So if vertex1 is adjacent to vertex2 and vertex3 in one graph, than it must do so in the other. Also that isomorphism can easily be applied to other varietys of graphs.

Are these two graphs isomorphic? They retain the same shape, but the direction of the edge from vertex1 to vertex4 changes between the two, so it cant be isomorphic, right? Well, I was told it was without an explanation. Are they wrong, or am I missing something? Any help would be appreciated.

In the original graph, vertices have following degrees.

Let's give the names to the vertices of the second graph: 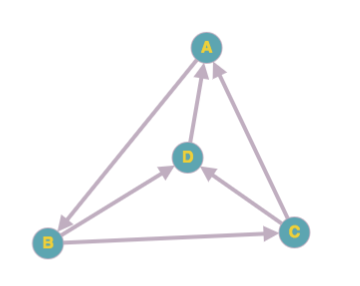 So the error was here:

They retain the same shape, but the direction of the edge from vertex1 to vertex4 changes between the two, so it cant be isomorphic

On the second graph, there are no named vertices, so you can't just say that the direction between some named vertices changed. You need to have a more rigorous method of proving that, and often the one I've described above will suffice.

Not the answer you're looking for? Browse other questions tagged discrete-mathematics graph-isomorphism or ask your own question.