I was playing around the expression for $\binom{\binom{n}{2}}{2}$, and I discovered that it equals $3\binom{n+1}{4}$. I couldn't come up with any combinatorial argument, but found various ones on this site. I'm trying to understand a particular one.

In this comment, the user r9m gives the following combinatorial argument:

I'm having trouble understanding both parts of this argument. In particular, I cannot think of the things to choose from for both binomial coefficients.

For the first half, what are the $\binom{n}{2}$ things, from which we need to choose $2$? I suspect that since a parallelogram is uniquely defined in this grid by its longer diagonal, they are the endpoints of the diagonal of a parallelogram. But there are some restrictions for choosing the endpoints of a diagonal: e.g. the line joining them cannot be parallel to any of the sides of the equilateral triangle.

For the second half, I understand the factor of $3$, and counting parallelograms with their shorter diagonal parallel of a particular side. However, I cannot see a "thing" that exists $n+1$ times in this figure. I suspect $4$ is the number of vertices of a parallelogram, but what is $n+1$?

Nice combinatoric demonstrations of the identity have already been described in the previous answers. I would only propose a possible explanation for what it seems one of the principal issues of the OP, i.e. the r9m's comment regarding the ${n\choose 2}$ "things" to be considered and from which we need to choose $2$.

Let us consider our equilateral triangle with side length $n−1$ tiled with $(n-1)^2$ equal and equilateral triangles with unit side. Let us orient our large triangle so that it has one vertex directed upward (just as in the figure provided in the link of the OP). It is not difficult to show that, among all small triangles, the number of those which have a vertex directed upward is $n(n-1)/2={n\choose 2}$. In our specific case of a triangle with side $4$, colouring the resulting $10$ up-directed triangles we obtain the following figure: 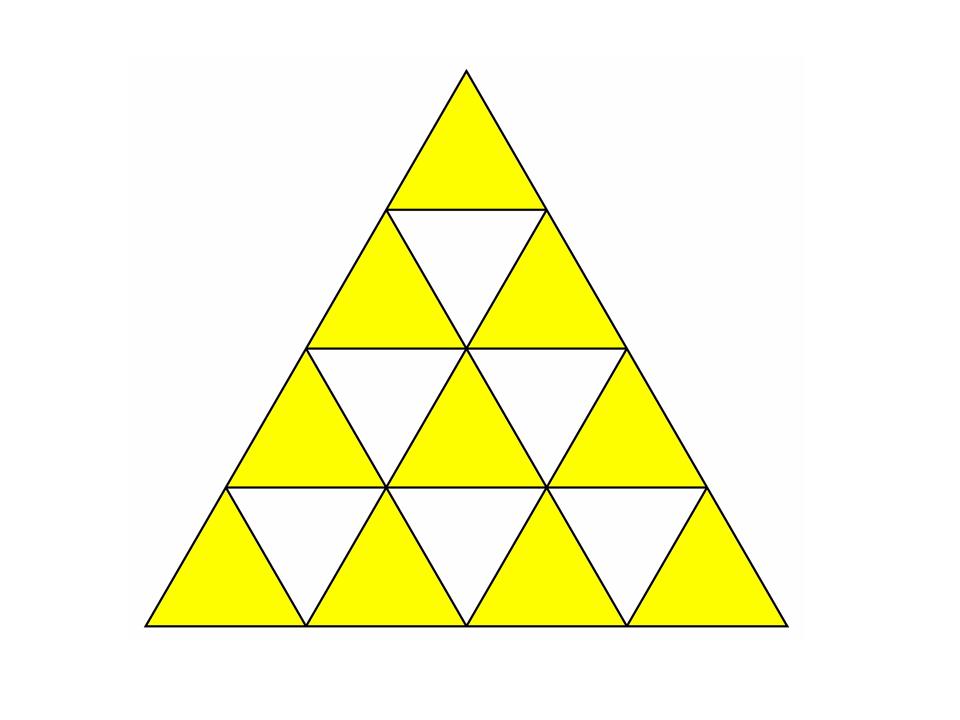 Now we can note that each parallelogram within the large triangle can be unambiguously identified by choosing a pair of these up-directed small yellow triangles. To clarify this, let us call $A $, $B $, $C $ the upper, lower left, and lower right vertex of the large triangle, respectively. Now let us consider the $15$ parallelograms whose two acute vertices are oriented left-down and right-up (i.e., those whose minor diagonal is parallel to $AC $). Each of them is uniquely identified by two small yellow triangles: the first is that whose lower left vertex is also the lower left vertex of the parallelogram, the second is that whose upper vertex is also the upper right vertex of the parallelogram.

We can now repeat these considerations after rotating the large triangle clockwise by $120^o $, so that its upper vertex is now $B $ and its base is $CA $. In this way, we can identify other $15$ pairs of small yellow triangles (note that these pairs are different from the previous ones) that unambiguously identify the $15$ parallelograms with minor diagonal parallel to $BA $.

Lastly, repeating these considerations after rotating again the large triangle clockwise by further $120^o $, so that its upper vertex is now $C $ and its base is $AB$, we can identify other $15$ pairs of small yellow triangles (again different from all previous ones) that uniquely identify the $15$ parallelograms with minor diagonal parallel to $CB $.

Not the answer you're looking for? Browse other questions tagged combinatorics binomial-coefficients combinatorial-proofs or ask your own question.