After visiting the Whispering wall where a whisper can be clearly transmitted between two locations on the surface of a dam wall over more than 100 metres, I was puzzled as to how this occurs. I decided to try to solve the following problem: What must be the shape of a curved wall such that any sound emitted towards the wall from one corner will be reflected directly to the opposite corner as in the following diagram (co-ordinates are $x$ and $y$)?

From this I derived the following differential equation (derivation below) but myriad substitutions and changes of variable have still left me puzzled as how to put it into a form which can be solved:

Derivation (note that from the answers it would appear that this is slightly incorrect): Taking the following horrible paint diagram where $D$ is the point at which the sound wave is reflected and $AB$ is the tangent to the curve at that point, where we must have that the angles $BDC$ and $ADF$ marked $\theta$ are equal since a specular reflection is assumed to occur: 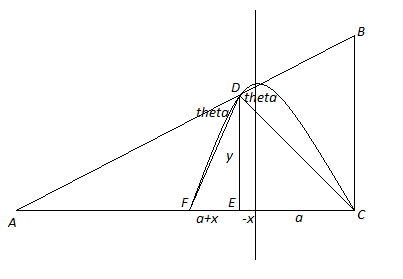 (Note that this is for negative $x$ only so $-x>0$; the vertical line is through the maximum of the curve). I then take the triangle $DBC$ and divide the lengths of the sides by $a-x$ to find that (using the relation between the tangent and the derivative):

I then take the triangle $ADE$ and divide the lengths by $y$ to obtain:

Setting these equal and taking $\tan$ of both sides and using the law for the tangent of a sum of angles to obtain two fractions which I cross-multiply and then collecting terms I get the differential equation shown above.

(Note that interesting facts about similar walls which might better explain the Whispering wall I originally mentioned can be found here, here and here, but I am now specifically looking for a solution to my problem. Also not that the Wikipedia page in my very first link mentioned a ‘parabolic effect’, but I could not see how that would be relevant to my problem)

Not the answer you're looking for? Browse other questions tagged calculus geometry ordinary-differential-equations or ask your own question.

2
A 2x4 in a doorway
0
Reflection of $x=1$ about $x+y=1$
1
moving pipe around corner
2
A fence of $y$ ft is $x$ ft from a wall, find shortest ladder using trigonometry
1
Is it possible to find an expression for the x-value of where the normal line to a function hits another function? (Picture shown)
2
Finding Side Length of Square Adjacent to Square Inscribed in Unit Circle
0
Find the distance through a pipe wall
2
What is minimum speed needed to throw object over a wall that height h and at distance d?
1
Differential equations and optics