How to solve an nth degree polynomial equation

Here, the degree of x is given to be 2

For example, consider this equation:

There is no perfect answer to this question. For polynomials up to degree 4, there are explicit solution formulas similar to that for the quadratic equation (the Cardano formulas for third-degree equations, see here, and the Ferrari formula for degree 4, see here).

For higher degrees, no general formula exists (or more precisely, no formula in terms of addition, subtraction, multiplication, division, arbitrary constants and $n$-th roots). This result is proved in Galois theory and is known as the Abel-Ruffini theorem. Edit: Note that for some special cases (e.g., $x^n - a$), solution formulas exist, but they do not generalize to all polynomials. In fact, it is known that only a very small part of polynomials of degree $\ge 5$ admit a solution formula using the operations listed above.

Nevertheless, finding solutions to polynomial formulas is quite easy using numerical methods, e.g., Newton's method. These methods are independent of the degree of the polynomial.

I'd like to show you this flowchart which summarizes all methods of solving up to quartic polynomials manually: 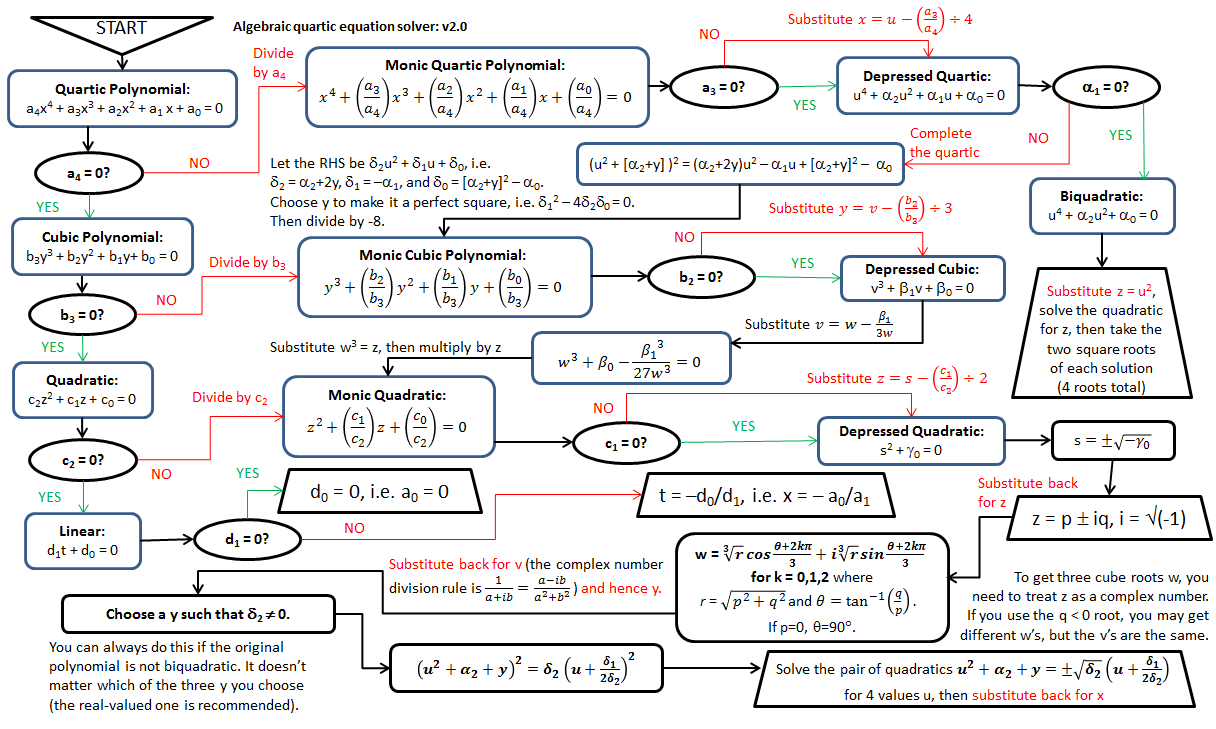 But Jordan has shown that any algebraic equation can be solved using modular functions. There are explicit formulas without the need to use Tschirnhausen or other transformations. However, application of this theorem in practice is very difficult because of the complexity of the relevant hyperelliptic integrals and higher genus theta functions. (General formulas see here)

If I understand the question correctly: there is no general expression for finding roots of polynomials of degree 5 or more. See here

For degrees 3 and 4 the Wikipedia entries are quite good.

The paper Analytical Method for Finding Polynomial Roots was published in 2015. It describes the solving of polynomial equations using of analytical infinite power series.

Maybe you'll also want to know how many real solutions there are. Descartes' rule of signs is good for that. Also, see Sturm's theorem.

Sometimes, you need some information on the numeric value. You usually don't need much: "$\alpha$ is the only solution to that equation that lies between 3 and 4", for example. It's pretty easy to get rough information through ad-hoc means. Newton's method can be used to improve estimates, and determining how many solutions there are can help ensure you've found everything.

There is a very advanced way of solving polynomial equations approximately. This is the Weierstrass method also known as the Durand-Kerner method. To understand this method requires a knowledge of several branches of advanced algebra. This method is studied under Numerical Analysis and is explained for polynomials of degree four, but generalized to polynomials of higher degree. Another advanced method is due to Jenkins-Traub. These two numerical solutions, the Durand-Kerner and the Jenkins-Traub method are to be found in Wikipedia. The question was: How to solve a polynomial of degree n. Knowing to where to find the solution is an answer to the question cited. In general, there are no exact solutions for solving polynomials in terms of radicals, that is in terms of square roots, cube roots , etc., for polynomials of degree five or greater, and the solutions are approximations. There are exact solutions in terms of radicals, but only for particular cases of the polynomial coefficients. The numerical solution to any degree of approximation of a polynomial of degree n by constructing algorithms based on algebraic procedures, for example the two methods cited above, would be studied under Computer Science and Numerical Analysis by specialists in these fields.

The best general, understandable description of how to handle polynomials in general is the relevant chapter of Wilf's "Mathematics for the Physical Sciences" (Dover, 2006). The text is somewhat dated, as it is a reprint of a book from before computers being ubiquous, and there are further developments.

The first thing is to look for rational zeros, if any are found, divide their factors out.

For some special forms of polynomials, you can get the zeros by reducing them to lower degree ones, or with known zeros. Up to degree 4, there are formulas in terms of algebraic operations (addition, multiplication, roots), for degree 5 and above there aren't. Also, if there are multiple zeros, they are common to the polynomial and its derivative, so computing the greatest common divisor of the polynomial and its derivative is a first step.

Even when there are explicit formulas, for degrees 3 and 4 they are unwieldy, it is often more useful to get a numerical approximation.

An approach that immediately comes to mind is to first establish the relationship (non-linear, typically) between each root of the polynomial (assumed, complex) and the coefficients of the power series, and then solve the resulting set of $n$ equations for the $n$ variables i.e, the roots, using an iterative numerical algorithm (say, Newton-Raphson extended to $n$ equations in $n$ variables) computed in the complex domain (to ensure convergence).
A pretty good approach to get the power series coefficients is by using discrete convolution for polynomial multiplication (see here ).

However, I was wondering on how to solve an equation if the degree of $x$ is given to be $n$.

The only thing that's now between you and your solutions (all $n$ of them) is a computer program.

Not the answer you're looking for? Browse other questions tagged polynomials or ask your own question.

12
Are translations of a polynomial linearly independent?
9
sufficient condition for a polynomial to have roots in $[0,1]$
8
Polynomial of $11^{th}$ degree
4
Solving 5th degree polynomial