Intrinsic curvature, which we normally describe in terms of the Riemann tensor $R^a_{bcd}$ and quantities related to it, fundamentally has to do with the effect of parallel transportation on the manifold, and the curvature is responsible for manifolds having non-trivial holonomy.

Now if we have a sub-manifold embedded in some other manifold, the extrinsic curvature, as you more or less say, can be used to describe the way $\Sigma \subset M$ curves in $M$. The best way I have had it put to me is that, extrinsic curvature corresponds to everyone's layman understanding of curvature before we were ever introduced to differential geometry.

If the difference in dimension (or co-dimension) is greater than one, we can define multiple normal vectors to the manifold $\Sigma$, and there is a third notion. In the case of two, $\{n^a,m^a\}$ we can define a normal fundamental form, $\beta_a = m_b \nabla_a n^b = -n_b \nabla_a m^b$ which can be used to describe the curvature as one moves around $\Sigma$ of the normals in orthogonal planes.

Explaining the idea of a 2 D surface embedded in 3 D Space.

You will get a (much) better answer than this, but a straightforward reason is that for using extrinsic curvature, we need an extra dimension to put the lower dimensional object "into".

Intrinsic curvature of a surface or manifold can be performed by using math techniques developed by Gauss and Riemann and allows us to do without the extra dimension in curvature calculations. 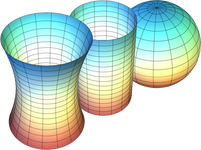 So 2D embedded objects in 3D space are easy to measure.

But we have to describe 4 D objects and events in a 4 D space, so we don't have the "elbow room" of an extra dimension.

So we give up on the visual attempt ( which is why most, if at all depictions of real 4D on TV and books are misleading) and we use expressions such as this:

to calculate how much spacetime is curved.

This above is an example using intrinsic curvature, we don't (and actually can't) "lift " ourselves above the space.

We are in 4 D space-time, so to perform calculations in this space, we must use intrinsic curvature math ( differential geometry) as we can't go to a higher dimension.

In slightly more specific terms,you might have read about the metric tensor, which is based around the idea of using basis vector and their components to calculate distances (in 4 dimensions) utilising differential geometry to measure deviations from flat space caused by massive objects.

The other benefit of the intrinsic based metric tensor is that it is applicable in all GR calculations, (invariance).

Exactly what you wrote. It means that a surface appears curved when looked from the space that contains it.

Take the circle, $S^1$, for example. The intrinsic curvature would be what people call Riemann tensor. Since you can cover this circle globally by a single coordinate, you would get Riemann=0. There aren't any surprises when you parallel transport a vector around any closed loop.

Now, intuitively the circle appears curved. This is because it has extrinsic curvature. But be mindful, this definition makes reference to the ambient space. You only see the circle curved because you are looking at it from outside. Again, if you were constrained to live on the circle, it would pretty much look flat to you.

Here is a way of thinking about the difference that I find useful. It is not particularly rigorous but I think it can be made so.

So, now, the way you define curvature of $M$, both intrinsic and extrinsic is in terms of parallel transport. In particular what you need to do is to take a vector in the tangent space of $M$ at some point $P$ and parallel-transport it around a little loop, ending up back at $P$. Then you compare the initial and final vectors. if they are the same (for all loops, and all vectors) then the manifold is flat, and if they are not the same, then it's curved.

In order to actually quantify this notion, you then need to develop a lot of mechanism to describe what parallel transport is on the manifold and what geometrical object describes how vectors change when you parallel transport them around little loops: that object ends up being the Riemann tensor, of course. But the idea is easy to understand.

Intrinsic curvature is when you do this trick entirely in $M$: you take your vectors around little loops in $M$ and see what you get back: if you don't always get back the same vector then $M$ has intrinsic curvature, if you do, it doesn't.

Extrinsic curvature is when you do this partly in the space into which $M$ is embedded. It's easy to see that vectors in $M$'s tangent spaces correspond to vectors in the (tangent spaces of) the space into which $M$ is embedded, so at any point you can 'lift' a vector at a point in $M$ out into the larger space and start transporting it there instead, and then drop it back onto $M$ at some other point and continue transporting it in $M$ back to where it started. So, in particular you can construct loops which are partly in $M$ and partly in the larger space, and transport things around those. Note that there are two different notions of parallel transport in such a loop: while in $M$ you must transport using $M$'s rules, and while in the larger space you must transport using its rules (and the larger space is flat, of course).

$M$ has extrinsic curvature if you don't always get the same vector back when transporting a vector around such loops.

The best way to think about this is to consider an example. Think about a 2-dimensional cylinder embedded in ordinary flat 3-space in the obvious way.

Well, you can easily convince yourself that the cylinder has no intrinsic curvature.

But now think about the extrinsic case. Consider a loop which starts at a point on the cylinder, goes half-way around it, and then hops out into the embedding space and crosses back to the original point (by any path in the embedding space: it does not matter since it is flat). It is easy to see (draw pictures!) that moving a vector $\vec{v}$ around such a loop results in $-\vec{v}$: it is pointing in completely the opposite direction.

Not the answer you're looking for? Browse other questions tagged differential-geometry curvature or ask your own question.