In the following page in one of Ramanujan's Lost Notebooks, Ramanujan found a formula for sums of cubes such as the famed $1729$. 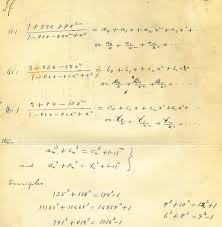 Which can be found in the bottom right hand corner. But also in that page, is a formula:

My Question: How would you go about proving this?

I did notice one thing: It seemed like Ramanujan was using generating functions. Where given a sequence, you pretend that the numbers are coefficients of a polynomial, and you can then collapse that down into a single expression.

Michael Hirschhorn has given two proofs of Ramanujan's cube equations:

Michael D. Hirschhorn, A proof in the spirit of Zeilberger of an amazing identity of Ramanujan, Mathematics Magazine 69 (1996) 267–269.

Not the answer you're looking for? Browse other questions tagged algebraic-geometry summation or ask your own question.

4
Fermat's Last Theorem in multiple variables
19
How did people get the inspiration for the sums of cubes formula?
7
Understanding Euler's Sums of Cubes Substitution:
0
Inside the proof of fermat's last theorem
3
Non-number theoretic formulation of Fermat's last theorem?