Can such non - Euclidean geometries actually be imagined visually or can they be worked on only analytically like 4 dimensional worlds? If they can be imagined, and we relax Euclid's parallel postulate, what exactly do the previous postulates and definitions even mean? As apparently by relaxing the parallel postulate, we achieve geometries where the sum of the interior angles of a triangle isn't 180 degrees anymore but then the triangle itself in such worlds is curved and the angles are not sharp. Now if the angles themselves are not sharp and resemble a curve how do we give a certain degree or radian measure to it? And lastly does a geometry exist where a 'straight line' in the Euclidean sense is non existent, if so what restraint does that system have that says that such a thing is impossible. I mean what mathematical equation or axiom of the system disallows straight lines or sharp angles? Thank you very much for your time!

The shortest answer to your question refers to particular models: The spherical model of elliptic geometry, and the Poincaré disk model of hyperbolic geometry.

In each case, it turns out that Euclid's first four postulates are satisfied. These are not the only models of elliptic and hyperbolic plane geometry, but it turns out that (aside from an overall choice of "unit length") any two models of elliptic geometry are abstractly equivalent, and any two models of hyperbolic geometry are abstractly equivalent. 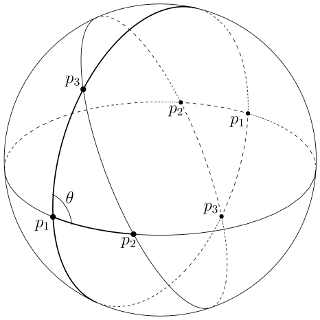 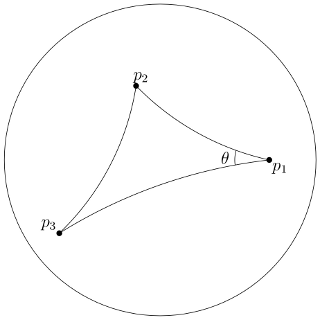 38
Why is Euclidean geometry scale-invariant?
2
What does the completeness of a system mean for the provability of certain statments?
0
Is there really no proof to corresponding angles being equal?
4
What is the definition of a straight line and parallel lines in non-euclidean geometry?
0
Why is sphere non-euclidean space?
5
Is it possible to prove the independence of the parallel postulate without non-euclidean geometry?
1
what is wrong with Ptolemy's proof of the Euclid's fifth Postulate?