Sufficient but not Necessary conditions

We were having a discussion at the office when we should have been working and I suggested that an example of a Sufficient but not Necessary condition is:

Given a natural number of fewer than, say, 25 digits. We wish to establish if it is divisible by six.

An example of a Necessary but not Sufficient condition was: Is the number divisible by two? The other guy was happy with that and agreed.

My example of a Sufficient but not Necessary condition (however simple) was: Is the number equal to six? The other guy (who has a degree in math) insisted that because this would not apply to numbers such as 12 this could not be Sufficient. I maintained that that is the whole point, the condition is not necessary but because it is Sufficient, if it is true, you are done, QED.

This promptly devolved into "It is not", "It is, too" which did not seem very mathematical, somehow.

Could we get somebody to comment? The other guy decided he did not want to discuss this further but I would like to feel a little vindicated. (If I am wrong, I will send him your answer.) Thank you in advance.

Then A is by no means necessary for B: $B\Rightarrow A$ or even a characterization of B: $A \Leftrightarrow B$

A picture and real-life example may aid to understand the following:

Your main question is whether (2) follows from (1);

The above is exemplified in the picture below, if P = Northern Ireland, Q = UK, R = Great Britain. 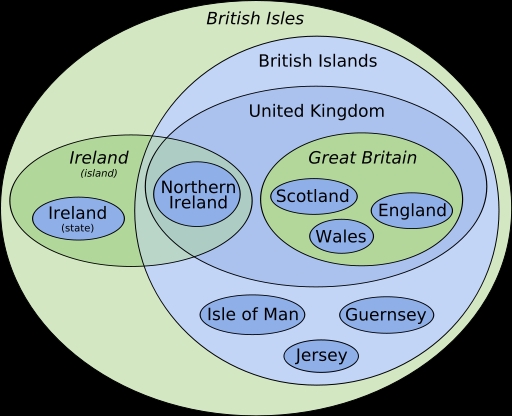 24
Why is it that if "A is sufficient for B" then "B is necessary for A"?
-3
Is it material or logical implication?