Can a polyhedron, made solely of regular pentagons and regular hexagons, be made with an arbitrarily large number of hexagons?

This comes from a related question, and especially after I read about the Goldberg Polyhedron.

If you take a look at that article, if you look closely at some of the pictures, you'll notice that the hexagons are not all the same size: 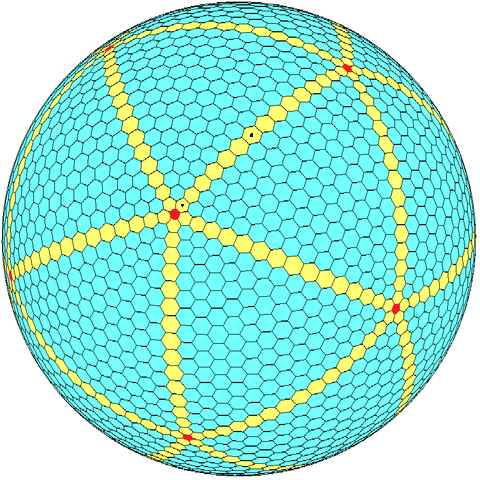 I marked two hexagons with black dots. They are clearly not the same size.

Another site I investigated was dmccooey.com where they have interactive models and even list the types of hexagons. That site also confirmed that not all hexagons were the same.

What I want is a polyhedron, or class of polyhedra, with the following properties:

Does such a thing exist? Why or why not? Maybe someone can also explain why the Goldberg Polyhedra do not have regular hexagons in the first place, which is a real bummer for me.

Obviously three hexagons sharing a common vertex cannot be perfectly regular, otherwise the surface would be flat in a neighbourhood of the common vertex!

So it's quite a bummer. We cannot have arbitrarily large number of hexagons if we want them to be regular hexagons. Looks like the closest with can get is the soccer ball shape (truncated icosahedron), which actually only has two hexagons meeting at a vertex, not three, so they can be regular.

A set of such polyhedra can be obtained from a dodecadron through repeated edge truncation: in Conway's notation, that is the chamfer transform denoted through c. Have a look at this wonderful site for generating pictures of such objects: 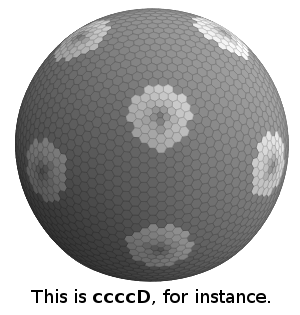 Obviously three hexagons sharing a common vertex cannot be perfectly regular, otherwise the surface would be flat in a neighbourhood of the common vertex!

Actually the are infinitely many different polyhedra you make this way. For example take two dodecahedra and join them so that they share a common face. As you can see you can keep on repeating this process forever creating different polyhedra. An interesting class of polyhedra of this type are called toroids some of which look like solids with "tunnels" through them.

However what you probably had in mind was convex polyhedra (so faces meet in a "ridge" so no joining to make a continuous flat face or as a valley). In this case there are just two such polyhedra, the dodecahedron and the truncated icosahedron.

Now it is possible to make other convex polyhedra using only pentagons and hexagons however you have to sacrifice something. You can make polyhedra where the length of the sides are all the same and the vertices of each side are in the same plane BUT the angles between each of the sides of a face is not always the same. These polyhedra were discovered quite recently by Schein Gayed. Their discovery came about though work on proteins and is an active area of research to find out more about such shapes.

Alternatively you can make a "cage" where the distance between any two vertices is the same and for a "face" the angle between the sides is the same BUT these vertices will not all be in the same plane ( so if you made the object the faces would not all be flat). There is no limit to the size of these structures.

These shapes became of great interest to chemists when Sir Harry Kroto (who died very recently RIP) discovered carbon atoms could form into such cages (for which he won the Nobel prize) and so started much of nano materials. These types of structures are also known as Buckmisnter fullerenes, so called because they are related to geodesic domes which the Architect Buckmister Fuller popularised. The EPCOT ball at WALT DISNEY WORLD is an example of a geodesic dome (and it was Buckmister Fuller who coined the phrase that living on the planet earth is like traveling on a spaceship though time. Hence the name of the ride inside the EPCOT ball is "spaceship earth" and what the ride is about).

Not the answer you're looking for? Browse other questions tagged geometry polyhedra or ask your own question.

4
How to design/shape a polyhedron to be nearly spherically symmetrical, but not a platonic solid?
0
How to apply Euler's formula to polyhedra with pentagons and hexagons
1
How can I define a Goldberg polyhedral with nearly-regular hexagons, given a hexagon width and sphere circumference?

10
Maximal volume for given surface area of an $n$-hedron
5
Coordinates of the Vertices of a Goldberg Polyhedron
3
Does a polyhedron with 7 hexagons and 20 pentagons exist?
6
How does the existence of Platonic graphs imply the existence of Platonic solids?
11
Possible all-Pentagon Polyhedra
5
Looking for more “exotic” classes of polyhedra
4
Geodesic sphere using only Regular pentagons and hexagons
0
How to apply Euler's formula to polyhedra with pentagons and hexagons