I learned the basics of Bayes, but I don't understand what it means to have $O_1$ and $O_2$

Problem (c)) Suppose that he fluids the same coin a third time and it shows tails. What's the probability that it is the fair coin? How do we solve this?

We can simplify the problem to: given we got two heads in a row, what is the probability it is the fair coin?

You first put your hypothesis into the columns 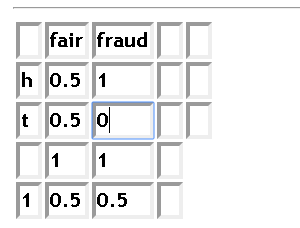 The column entries say the expected distribution of observations (I guess that O stands for "Observation" in your question), where it may take heads or tails values/events. The priors .5 are given to every hypothesis (coin fariness).

Result are read from third table

where rows show distribution of hypothesis given observation. You say that heads is observed -- read first row.

We can add more rows 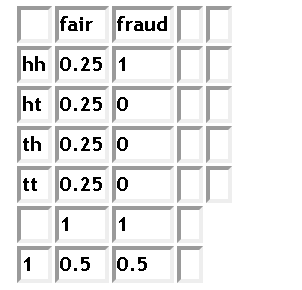 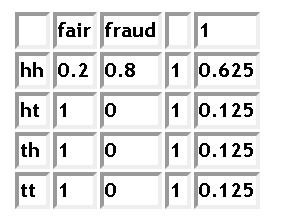 In your formula, however, instead of making two observations under assumption of equal priors .5/.5, you make a single (second) observation with priors 1/3 and 2/3 that you have got from the first experiment. Enter the values 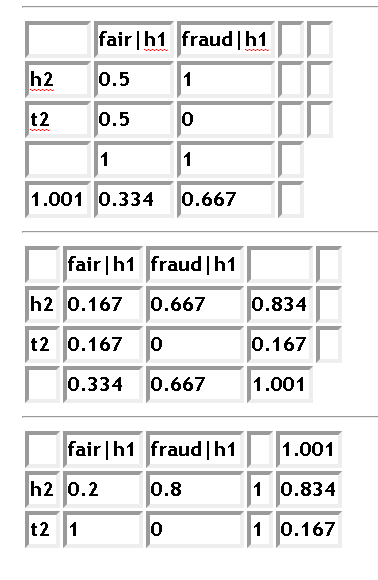 You see, you have got .2 again in the last table.

The algorithm first converts the column distribution of the first table into the intermediate, joint distirbution by multiplying every first table entry with the coumn weight (bayesian call it column or hypothesis "prior"). This step correpsonds to the nominator of your formula. In the second step, it makes the row distribution by dividing the row entries with the row totals, which correponds to the denominator of your formula. We can go back to the joint distribution if multiply the row entries with the row margins.

0
Probability of tossing coins
1
Consider two players P1 and P2
2
Math Problem (one-to-one correspondences)
1
How to find out the conditional probability of an event followed by itself?
3
Conditional Probability for a coin to be fair
0
Checking my work for a probability problem
1
fair and double head coin
2
Coin Tosses Probability
0
Coin flipping and Bayes' theorem… but where does binomial theorem come in?
7
Gambler coin problem: fair coin and two-headed coin