When $\delta$ decreases should $\epsilon$ decrease? (In the definition of a limit when x approaches $a$ should $f(x)$ approach its limit $L$? )

Assume that the function $f$ has the following limit:

if I have the correct understanding of what this definition should mean, the following should be true:

if this understanding is correct then using the delta-epsilon definition of a limit (as a reference here is the definition $ \forall \epsilon>0 , \exists \delta > 0, if |x -a| < \delta \implies |f(x) - c| < \epsilon $ ) then the following should be true:

if we get $x$ closer to $a$ then we should get $f(x)$ closer to $c$. i.e. $ \delta_1 < \delta_2 \implies \epsilon_1 < \epsilon_2$ in other words when getting closer by shifting to $\delta_1$ then we should get closer by some other $\epsilon_1$. In other words, if $\delta$ decreases so should $\epsilon$ (probably not visa versa since the converse of the implication of a limit means something different).

My intuition is totally convinced this should be true so I proceeded to find a proof (that I assumed was a standard real analysis exercise).

So I started by choosing two different $\epsilon_1$ and $\epsilon_2$, so $\epsilon_1 \neq \epsilon_2 $ (I started here because its first thing to fix in the quantifiers in the definition of a limit). Then by the definition of a limit they both have their own $\delta$'s call them $\delta_1, \delta_2 > 0$. It seemed reasonable to assume $\delta_1 \neq \delta_2$ because otherwise it seems that $f(x)$ wouldn't be a function (i.e. it could have one single $x$ that maps two different values of $f(x)$ in particular the values of $f(x) = c \pm \epsilon_1, c \pm \epsilon_2$ would have the same corresponding $x$ value $x = a \pm \delta_1 = a \pm \delta_2$ ). Hopefully that assumption is right. So WLOG assume $\delta_1 < \delta_2$ since the real numbers have a strict ordering. Now what I hope to show is that $\epsilon_1 < \epsilon_2$ (with not success yet). This gave me two starting facts to start the proof:

we know also know that:

which seemed enough to start the proof. However, as I tried to proceed I got really stuck because I thought I found a counter example to the proof I am trying to do. Let me share you the picture which I think is the counter example (which I hope is wrong somewhere): 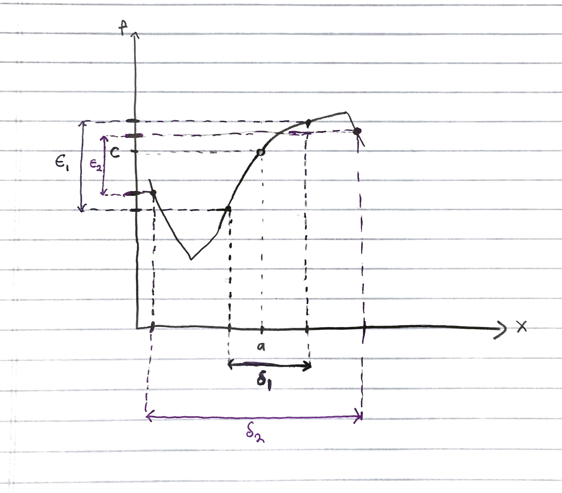 which shows the opposite of what I expected to have. When I move from $\delta_1$ to $\delta_2$ I actually get a increase in $\epsilon$. i.e. $\epsilon_2$ is in fact smaller than $\epsilon_1$, which is opposite of what my intuition tells me. I don't know if I actually have to maybe make a further assumption in $f(x)$ to make it work (I thought maybe I needed to assume continuity but the function I drew can easily be made continuous without hurting my argument I believe). In fact as we increase $\delta$ it seems at least in this example that we can have $f(x)$ approach $c$. I am not sure what is the fault in my argument/thinking but the two things I would appreciate most in the answer are:

When $\lim_{x\to a} f(x) = c$, it isn't just a matter that every time you "move" $x$ closer to $a$, $f(x)$ gets closer to $c$. In fact it very often will be that sometimes while you are moving $x$ closer to $a$, $f(x)$ will get farther from $c$, as your example demonstrated. Your example appears indeed to be a counterexample to the kind of proof you were working toward, because it appears your method of proof is incorrect.

Note that some authors write something like $\forall x \neq a$ and leave out the "$0<$", some may not actually write $\forall x$ (but that quantification over $x$ is supposed to be understood implicitly), and some write neither $x\neq a$ nor $0<\lvert x - a\rvert$ (possibly because those facts also are supposed to be understood implicitly; there was another question recently asked about that).

By the way, there is a technical error in the way you constructed your counterexample that does not invalidate the counterexample but may indicate a misunderstanding of the the meanings of $\lvert x -a \rvert < \delta$ and $\lvert f(x) - c \rvert < \epsilon$, namely, $\lvert x -a \rvert < \delta$ is equivalent to $a - \delta < x < a + \delta$: graphically, to represent $\lvert x -a \rvert < \delta$ you should indicate an interval along the $x$-axis that extends an equal distance $\delta$ to both the left and right sides of $a$. That is, the interval is symmetric around $a$ and the total width of the interval is $2\delta$. Similarly, $\lvert f(x) - c \rvert < \epsilon$ is represented by an interval on the $y$-axis that is symmetric around $c$ and whose total height is $2\epsilon$.

Keeping the correct interpretation of $\lvert x -a \rvert < \delta$ in mind, we can still see from your counterexample that sometimes, for a larger $\delta$, the function values at the extreme ends of the $x$ interval, $f(a - \delta)$ and $f(a + \delta)$, may be closer to $c$ than they would be for a smaller $\delta$. But you cannot simply measure $\lvert f(a - \delta) - c \rvert$ or $\lvert f(a + \delta) - c \rvert$ and say that's your value of $\epsilon$. There are several errors in that idea:

The last point is really the important one. The definition of the limit does not make $\epsilon$ depend on $\delta$ in any way; in fact it's the other way around.

It's OK to have an intuition that restricting $x$ to a tighter interval around $a$ will constrain $f(x)$ to be within a tighter interval around $c$, because this is true, as long as you remember that the interval that $f(x)$ is constrained to is not just the interval that contains $f(a-\delta)$ and $f(a+\delta)$; it must also contain all the values of $f(x)$ in all the peaks and valleys that occur for $x$ between $a-\delta$ and $a+\delta$. This intuition doesn't really help construct a proof, however, because it's not how the definition of a limit is structured.

To make a correct standard analysis proof of a limit using the $\delta$-$\epsilon$ definition directly, you start with the premise that a value of $\epsilon$ has somehow been decided, and then (without relying on any assumptions about what value of $\epsilon$ might have been chosen) show how to set $\delta$ to a value such that $$ \forall \epsilon>0 \; \exists \delta > 0 \;\forall x\; (0 < \lvert x -a \rvert < \delta \implies \lvert f(x) - c \rvert < \epsilon ). $$ While doing this, it often helps to keep in mind that there is no such thing as a positive $\delta$ that is too small. Choosing a smaller $\delta$ is always OK, because that never puts new values of $f(x)$ into the set of $f(x)$ values that have to fit inside the interval $(c - \epsilon, c + \epsilon)$.

In light of further comments, it seems there is a more fundamental misconception here.

If you would like to think of a function as drawing little "arrows" that start in the domain and end in the co-domain, and think of the function as "going from" the tail of an arrow to its head, fine. None of that should stop you from looking at a ball in the co-domain and asking, "Hey, what arrows point into here, and can I find a ball in the domain that is covered completely by their tails?"

It seems that your first mistake may be the idea that the "direction" of a function conflicts with the right to ask such a question.

Notice in choosing $\delta_i$ you chose the largest possible deltas you could. In that case there is no reason at all that $\delta_2 < \delta_1$. That simply is not a requirement. Indeed on any continuous not injective function this will always be possible.

And what if the function "hits" $c$ early and simply stays there?

But we didn't have to.

Instead of picking the largest deltas, try picking smaller deltas.

I think the main mistake of my question has been clearly pointed out that I was looking at just the edges approaching the limit rather than looking at everything within $\delta$ of the limit point $p$ to not jump by more than $\epsilon$. Thanks!

But I think I found the concept I was truly looking for which is the following:

For a given $\epsilon$ show that the largest $\delta^*_{\epsilon}$ decrease whenever $\epsilon$ decreases. So

Let $\epsilon_2 < \epsilon_1$. Let the set of all deltas that work for a given $\epsilon_i$ to be defined as follows:

now define the largest radiuses that are within their corresponding tolerance $\epsilon_i$ as follows:

notice that for $ \delta^*_{\epsilon_2} $ (corresponding to the tighter tolerance level) we have the following condition (notice the last inequality):

since $ D_{\epsilon_1} $ contains all points of $ D_{\epsilon_2} $ or less, it cannot introduce a larger number by accident. Therefore we have the following holds for their supremums then:

which is equivalent to:

Note that its crucial to talk about largest $\delta$ because with the standard definition of $\epsilon-\delta$, using some $\delta_2$ such that $\delta_2 < \delta_1$ "works" for satisfying being within $\epsilon_1$ and $\epsilon_2$, since we have:

so one could use $\delta_2$ for the $\delta_1$ for $\epsilon_1$. It works but its not the largest as required by the question/theorem I required.

Perhaps this is obvious but I will point it out. If we have an $ \epsilon_1 > \epsilon_2$ then the $\delta_1$ might not work for the smaller $\epsilon$ (i.e. $\epsilon_2$). This is because if the larger $\delta$ is too larger then it might be that it contain points that are out of the $\epsilon_2$ bound but still smaller than $\epsilon_1$.

Not the answer you're looking for? Browse other questions tagged calculus real-analysis proof-verification fake-proofs or ask your own question.

27
What's wrong with this "backwards" definition of limit?
18
What's the purpose of the two different definitions used for limit?
0
What is the correct proof that when $\epsilon$ decreases (in a limit) then the largest $\delta$ should also decrease?