Two different kind of $\Delta$-complex structures are given to $\Delta_n \times$I in the following two proofs:

Apparently the main theme is boundary of a prism consists of top and bottom simplices and the vertical wall. What I find difficult to understand is how one can get intuition in partitioning the prism into simplices. Any help will be appreciated.

This triangulation is a particular case of a general construction for simplicial sets, and triangulations of products of simplices $\Delta^p\times \Delta^q$ are related to combinatorial objects named shuffles. A reference for that is probably Gabriel, Zisman, "Calculus of Fractions and Homotopy Theory", chapter II, or the modern monograph "Simplicial Homotopy Theory" by Goerss and Jardine (though I am not sure they discuss shuffles there).

Let me try to explain from scratch how these triangulations arise. My explanation is not for the connoisseurs of simplicial stuff, so I apologize for a lengthy post and sweeping under the rug some details.

Let's say that a triangulation is something consisting of the following data:

We also require by definition each face to be triangulated, i.e. if $\sigma\in F$ and $\tau \subset \sigma$ is a nonempty subset of $\sigma$, then $\tau \in F$.

When some face lies in the image of a degeneracy operator $\sigma_i$ (i.e. has repeating vertices), we say that it is degenerate.

Here I enumerated the simplices in dimensions $0,1,2$ and I highlighted the degenerate ones (with repetitions of vertices). Note that starting from dimension $3$, everything will be degenerate (since we have only three vertices).

Let's work out the easiest example: take the interval $\Delta^1$ which consists of two ordered vertices $0\to 1$. The product $\Delta^1 \times \Delta^1$ will have the following simplices: 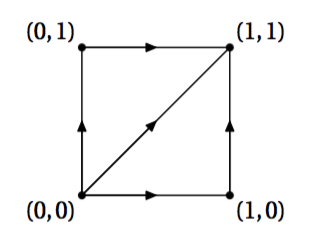 Similarly one could work out $\Delta^2\times \Delta^1$ (this example looks more exciting, but going through all the possible simplices is kind of tedious): 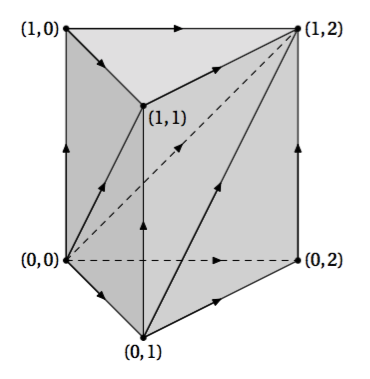 Though (hopefully) one can understand from the example above how to construct triangulations from a list of nondegenerate simplices in $\Delta^p\times \Delta^q$, I haven't really explained how an abstract simplicial set gives rise to some CW-complex (glued precisely from the nondegenerate simplices). This is called geometric realization, but that's a different story...

Triangulations of prisms and chain homotopies

You mentioned that to prove that homotopic maps $X\to Y$ induce chain homotopic maps between complexes $C_\bullet (X) \to C_\bullet (Y)$, you need to triangulate $\Delta^n\times \Delta^1$. In fact, you can construct a chain homotopy inductively, avoiding pulling out of a hat a mysterious combinatorial expression for $h_n$ for all $n$. See Tammo tom Dieck, "Algebraic Topology", §9.3.

Not the answer you're looking for? Browse other questions tagged algebraic-topology homology-cohomology or ask your own question.

56
Difference between simplicial and singular homology?
13
Intuition behind prism operators to prove homotopy invariance of homology
1
Hatcher's formula in homotopy equivalence proof
7
Why the attachment to simplices in (co)homology?
3
Constructing a chain homotopy for quasi-isomorphisms of injectives
0
Definition of Prism Operator and homotopy of chain complexes
4
Geometric intuition behind this chain homotopy