Type or classification of a distributive algebraic structure made from a subsemigroup and a subgroup? 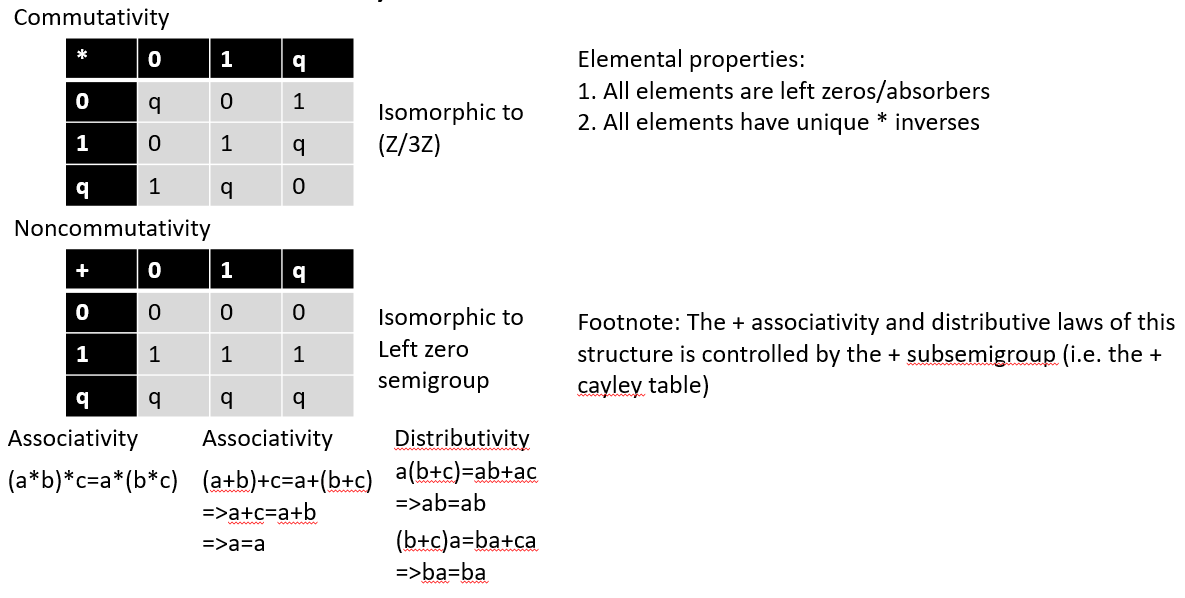 Meanwhile, $(S,+)$ forms a subsemigroup where all elements in the structure are left absorbers/left zeros

Distributivity "trivially" holds due to all elements being left zeros, similarly for + associativity (All distributive and associative laws were checked independently for all 27 possible entries)

Attempt to classify it:

Is there a name in general for a structure with a set $A$ and two binary operators $\cdot,\circ$ such that $\circ$ distributes over $\cdot$, $(A,\circ)$ forms a subgroup while $(A,\cdot)$ forms a subsemigroup?

Moreover, according to Wikipedia, the term semifield has at least two conflicting meanings.

Not the answer you're looking for? Browse other questions tagged abstract-algebra group-theory semigroups or ask your own question.

7
Are there any theories being developed which study structures with many operations and many distributive laws?
7
Is every sufficiently large semigroup $S$ a subsemigroup of the transformation semigroup on $S$?
2
Semigroup structure of principal ideals (under products) in a Dedekind domain
2
Infinite subgroup Product
2
When does one have ${\rm Aut}(M)\cong{\rm Aut}(K_{M})$?
0
Understanding Algebras With Alteratives to the Distributive Law
1
In search for a variety that would describe semigroups faithfully representable as right translations.