The tea bag problem: probability of extracting a single bag of tea

Suppose you have a bunch of tea bags in a box, initially in pairs, like these: 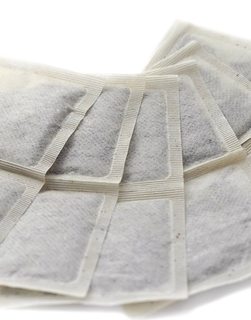 Let us suppose the box initially contains only joined pairs of tea bags, say $N_0$ of them (thus making for a total of $2N_0$ tea bags).

Every time you want to make yourself a tea, you put a hand in the box and randomly extract a tea bag. Sometimes you will find yourself with a joined pair, in which case you split it, take one for your tea, and put the other back into the box. If you instead extract a single tea bag (which was already split before), you just take it.

Now if you ever happened to be in a similar situation, you will probably have noticed that after a while you will almost always extract single tea bags and seldolmly find doubles (which is not surprising of course). The question is, what exactly is the probability $p_k$ of extracting a single tea bag, after $k$ tea bags have already been picked?

(This is a condensed version of @lulu 's answer.)

lulu wrote an excellent answer. Nevertheless I would like to offer a small variation on lulu's derivation that I find easier to understand.

I found a simple way to deal with this. I get Barry's Tea, which does come in paired bags. Furthermore, each bag is $3$ grams of tea, where the vast majority of teabags one sees are $2$ grams each. I get the Gold Blend and the Irish Breakfast.

I take both teabags and put them in the mug and then pour boiling water on them. And wait five minutes. More flavor. Oh, I do separate the two teabags, because I later pull them out with tweezers and squeeze them with teabag tongs to get most of the liquid out. That would be clumsy with joined bags.

Afterthought: Barry's is the first tea that I have regularly purchased that comes with no string. It is entirely possible that teabags with strings are typically two grams and teabags without them are typically three grams. Oh, and I sometimes get a very nice pu-erh, loose leaves, from a nearby shop called Far Leaves.