I've been playing the game Euclidea 3, and I can't really wrap my mind around one of the minimal solutions: 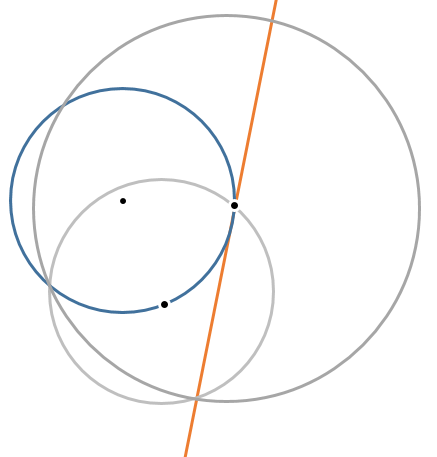 My question is: how does this work? How do these two compass operations always result in a point tangential to the blue circle's point? 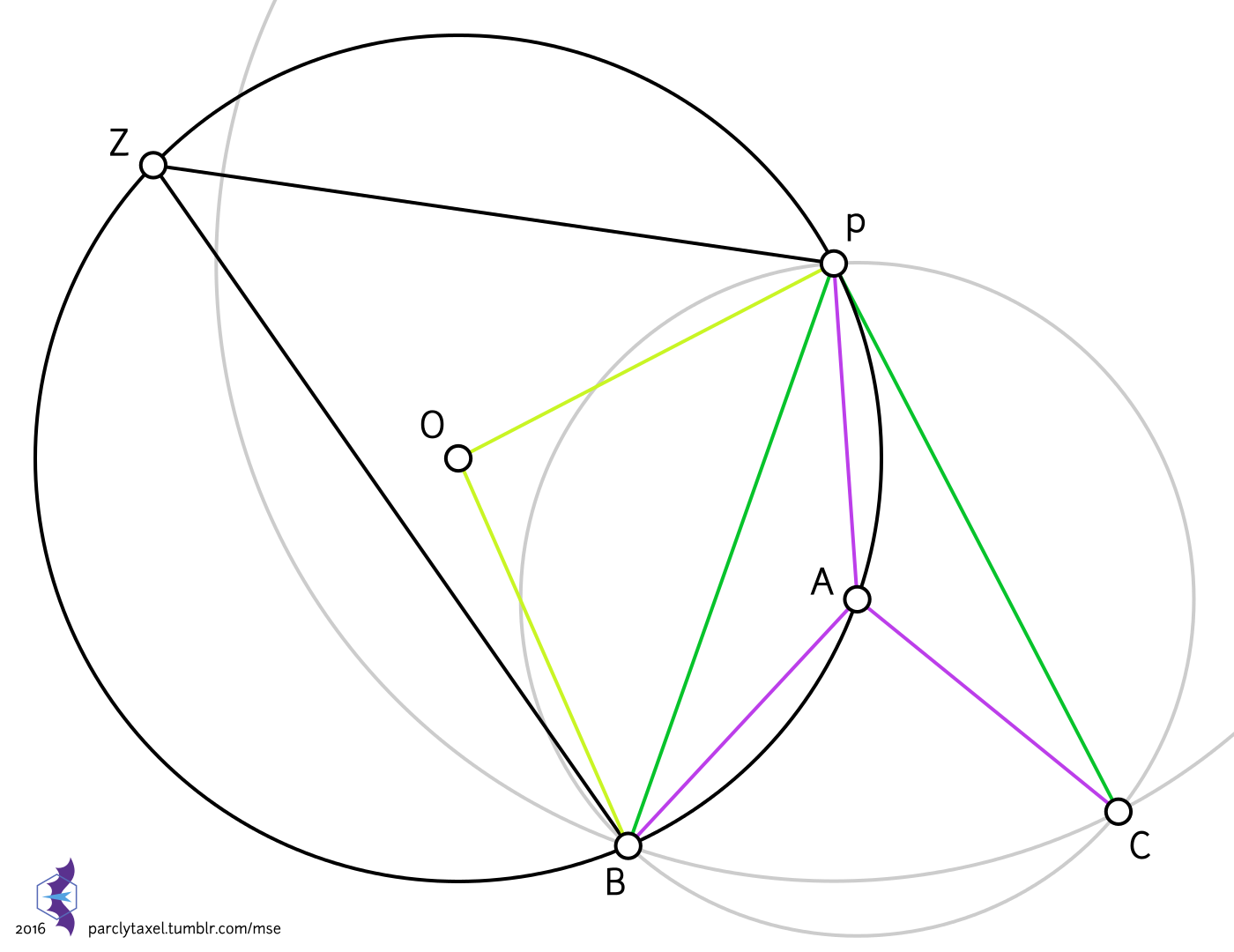 In the construction above, we are given the circle centred on $O$ (black) and the point $P$. We pick an arbitrary point $A$ on the circle and construct two more circles (in light grey) which intersect in $B$ and $C$; a segment of the tangent is then $PC$. $Z$ is a point on the black circle, on the other side of the chord $PB$ from $A$, and is solely a component of our proof: that $\angle OPC=90^\circ$. Line segments of the same length have the same colour (except the ones incident to $Z$).

My version is not a strict formal proof, but rather an intuition behind the idea. I hope it helps to get the point without having to dive into a lot of formal steps and theorems.

There are actually two major symmetries in this construct that make the whole thing possible.

The first is the reflection symmetry of the circle p relative to the AB line. It guarantees that the two arcs, DB and BE, are equal, which in turn implies that DE arc is twice as long as DB arc.

Now pretend this construct in motion. When we move point B along the circle p, keeping all given constraints, the DE segment rotates relative to the AD line twice as fast as DB does and, consequently, $\angle ADE$ changes twice as fast as $\angle ADB$.

Here we have to note the second major symmetry -- the symmetry of the circles q and s relative to the DB line. This symmetry implies that $\angle EDB = \angle GDB$.

Continuing to look at this in motion, we notice that when we move B, say, towards D, the DE segment 'chases' the DB line with twice its speed. At the same time, the DG segment symmetrically 'meets' the DB line with the same speed as DE, but in the opposite direction. This neatly guides us to the notion that the DG segment stays fixed, or, in other words, $\angle ADG = const$.

Now all we're left to do is to find the actual value of $\angle ADG$. We can continue to look at the motion described above, pretending that B approaches D. We see that all the lines DE, DB, and DG approach each other and become one line as B becomes D. And this line is clearly tangent to the circle p. But DG was not even moving relative to AD, so it should have been the same tangent line from the very beginning. 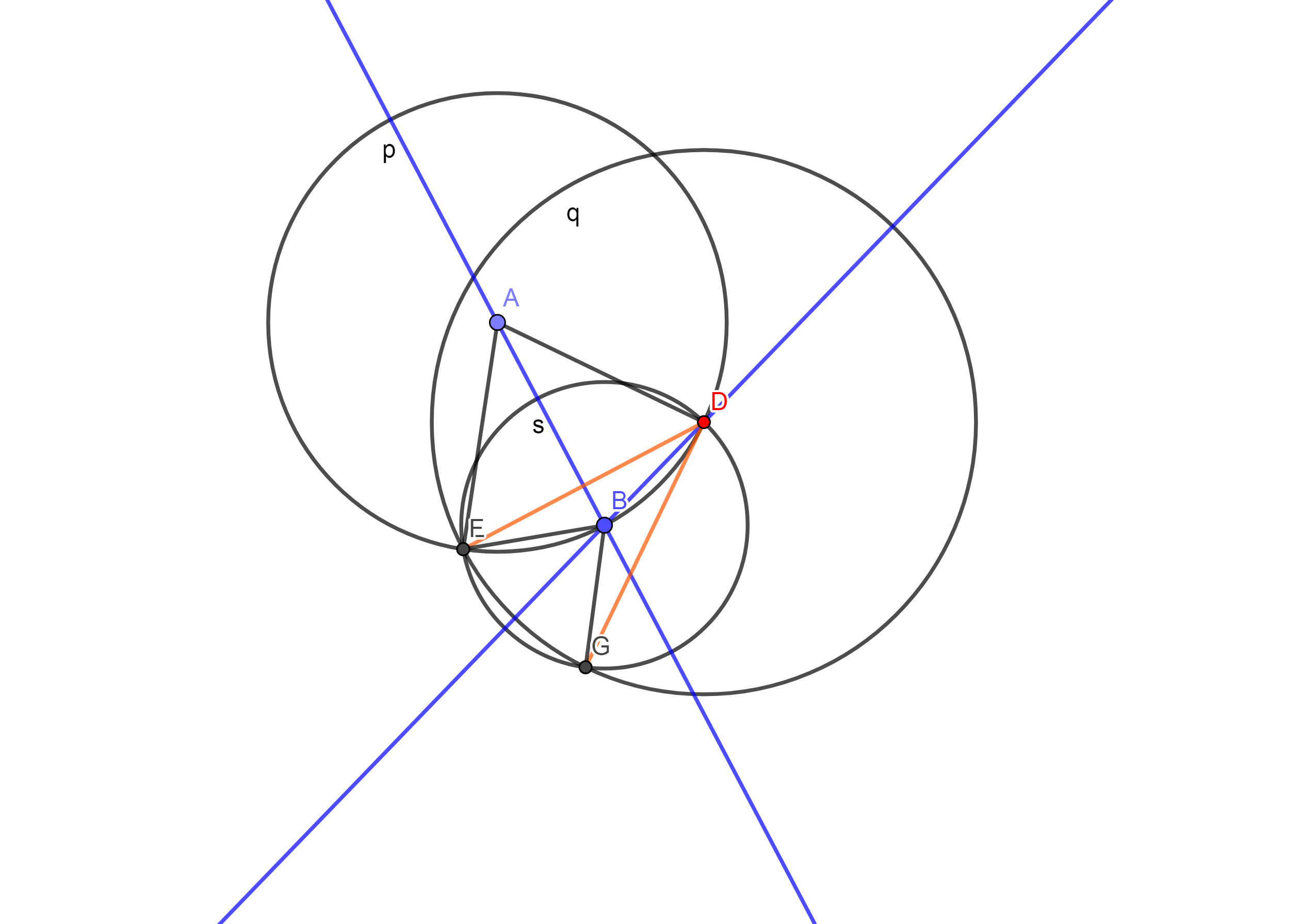 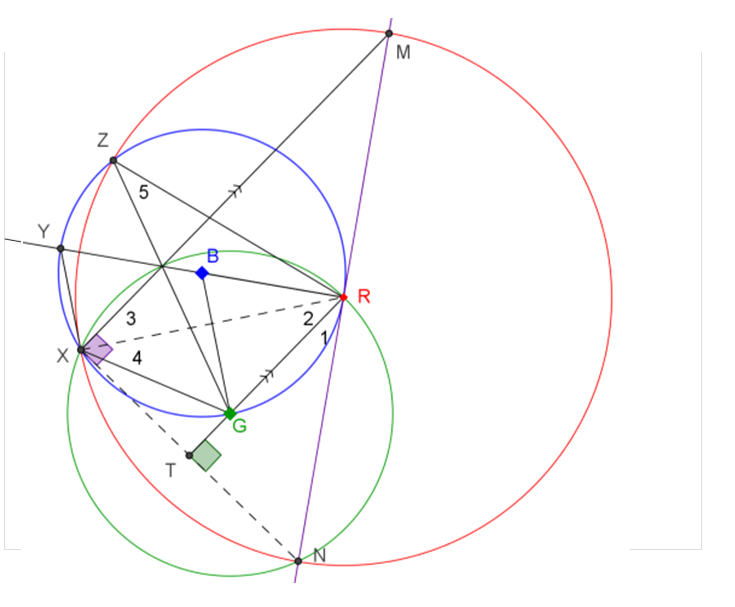 Therefore, $\angle 5 = \angle 1$. This means MRN is tangent to the blue circle by “converse of angles in alternate segment”.

Not the answer you're looking for? Browse other questions tagged geometry circles geometric-construction tangent-line or ask your own question.

21
How can I construct a square using a compass and straight edge in only 8 moves?
77
Inscribing square in circle in just seven compass-and-straightedge steps
16
Constructing the incenter of a triangle in only six steps
1
Given a circle, its center, and a point on the circle find inscribed square
0
Circles to Lines in the Stereographic Projection of a Sphere
0
Draw a circle of unknown radius using ruler-compass construction
2
Categorize circle on a plane with "left" and "right" relative to a line.