Sorry for asking a very common question. For now this is a question which make me depressed for about an year. As a mathematics student I studied vectors very axiomatically which makes me feel depressed. Now my question is what is a vector. Please don't say that vectors are quantities having both magnitude and direction. Please explain that. 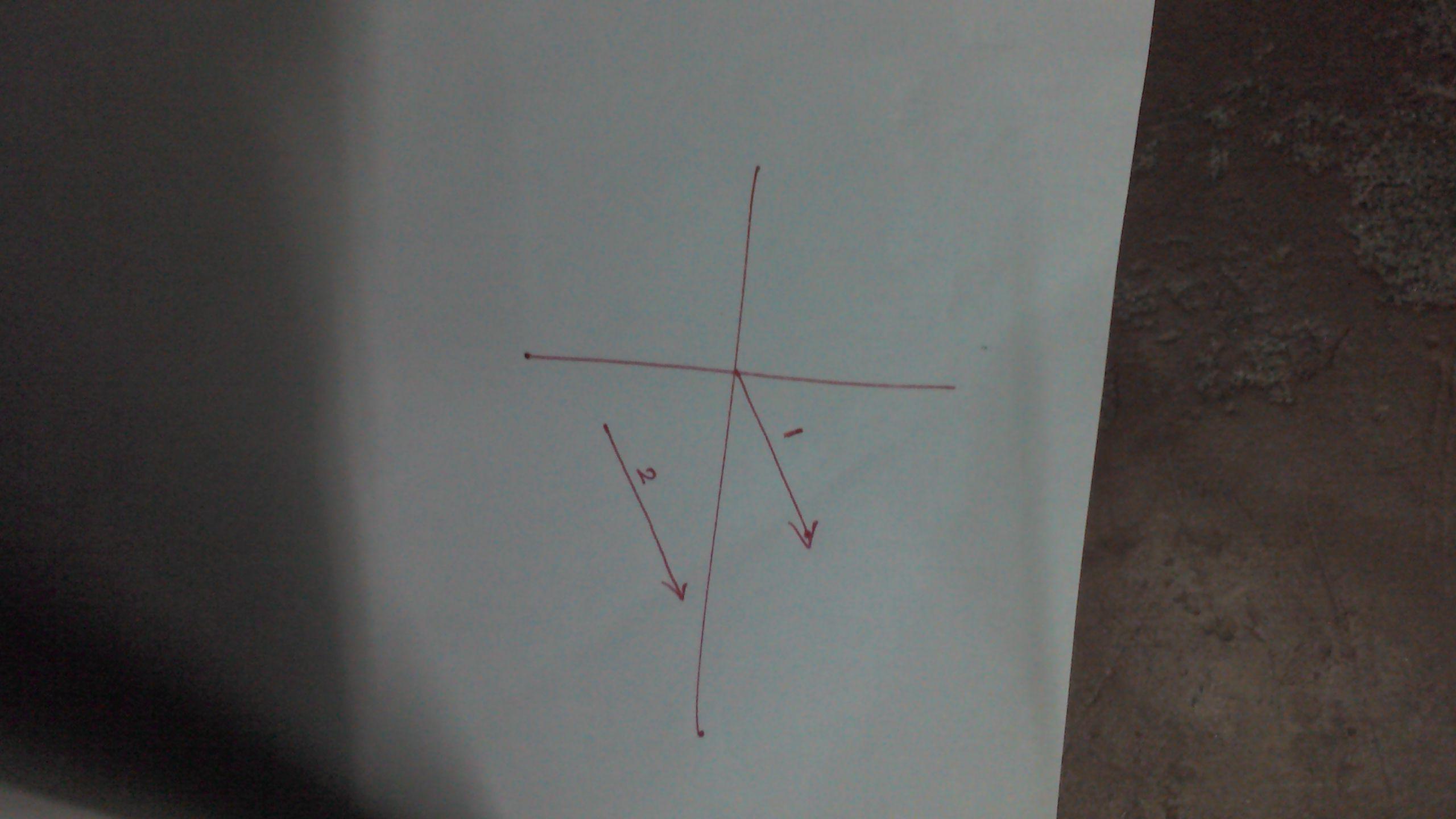 Please suggest me a good book which has a good approach to vectors from the basic. I want to understand the practical difference between the vectors and the statement "each point in a plane is a vector".

There are two things at play here that seem to be twisting you up - the formal notion of a vector and the geometric concept of a vector in the plane, or in space.

Formally a vector is just an element of a vector space, an algebraic structure with a few defining operations and properties, such as addition and scalar multiplication, closure of these operations, and the usual other familiar properties.

Geometrically, a vector is an arrow, like you drew above. We like this visualization because it allows us to realize an example of something that has these algebraic properties. We can add them together head-to-tail, stretch them out for scalar multiplication, etc. Notice though, that with scalar multiplication being a 'stretching,' the vector must have its tail at the origin, otherwise the dilation will move the vector outwards. Thus, every point in the plane is a vector because we can think of every point in the plane as the head of an arrow stemming from the origin.

For this reason, I think that some people might say that (2) is not even a vector at all. The 'direction' talked about in the phrase 'magnitude and direction' will not be the same after this dilation, because we think of the direction as being specified by the coordinates of the head point. To be more precise, imagine drawing a line from the origin through the head of (2). This is the direction at which a vector is thought of to point. If we dilate (2) by any factor (other than 1), the head will no longer lie on this line. While the arrow may remain parallel to the previous one, this is a matter of it's slope being the same in the usual grade-school sense - its direction is now changed.

Now in physics, this concept of 'magnitude and direction' is perhaps more fruitful. This is because in physics, pretty much every law is invariant under where in the universe you are at. It makes sense then, to translate arrows around freely, like when studying problems in mechanics and there are several different forces acting on different objects, we just consider the vector sum without thinking any harder about it. Physically, this makes perfect sense to do for that reason. Justifying it mathematically is a little harder, but not crazy complicated - it has to do with a special property of Euclidean space that allows for parallel transport of vectors - that it is flat. In more advanced geometry and physics, we cannot just slide vectors around like this so easily. But that might be a story for another day. It is because of this property of the plane that we can think of (2) as a vector at all - we can slide the vector to the origin of need be. If we allowed this, then they would be the same vector.

Regarding your concern about how to plot vectors, it is important to bear in mind that the coordinates of a vector only make sense with regard to a basis. For most basic problems, the standard basis makes sense to use - the usual Cartesian coordinates meeting at right angles in however many dimensions. In physics, often times other coordinates are used, and so you want to keep this in mind. That said, once a basis is fixed, plotting a vector is exactly the same as plotting a point like in grade school, although you will then connect the origin to the point with an arrow, like in your picture. In your case above, $x \hat{i} + y \hat{j}$ means that the arrow terminates at the point $(x,y)$ in the plane. Nothing super special here.

A position vector is a specific kind of vector in physics. It is basically the coordinates of the point. Often times, this guy is a function of a variable like time, so it is common to see things like $(x(t), y(t))$ to refer to the position vector of something in the plane. Often times this guy does not get an arrow, but is thought of as just a point. Don't be alarmed by this. It makes sense, for two reasons. (1) The object who's position is described by this vector is probably not literally an arrow - and we are just describing its location as a mathematical point for the purpose of the problem, and (2) as you grow mathematically, it is more and more common to dispense with useful metaphors, and just use the algebraic structure. By this I mean it is not all that important if you draw the arrow or not in the big picture - what matters is that the plane is a vector space, and so permits you to do certain things like addition of vectors and whatnot. If we wanted to visually represent what happened to the object with position vector $(x(t), y(t))$, we could just think of this as a parametrically defined function on the plane, and try to draw the curve. If we wanted to emphasize the vector nature, we could draw some arrows connecting the origin to the points of the curve, but as said, this is not really necessary.

As for a good reference on the subject, I think the best book is by Sheldon Axler, it's "Linear Algebra Done Right." It assumes you have seen the basic terminology before, and know what a matrix is and such, but I think from your question that you do know these things, you are just a little uncertain how to conceptualize them. For this, I think Axler excels. His exposition is highly conceptual. The book is mathematically rigorous. If you do not have much experience with mathematical proof, don't fret. I'm not saying you have to read the book and do every exercise to understand these ideas, I'm sure just reading it and attempting the exercises when you can will more than suffice to straighten out any problems you have. Of course, people here at MSE are happy to explain anything to you that is still opaque.

Last second thought: an honorable mention for a good book that is not so rigorous and so perhaps easier to read, if not quite as good about illuminating the ideas of linear algebra is the book "Linear Algebra" by Bretscher. I used this book in my undergrad course, and it's focus is more computational than conceptual, and it may be more in line with the kinds of calculations that an engineer or physicist would do. I would say just try both (both are standard and can be found in your university library with near certainty), and see which you like.

You certainly know that numbers could refer to different kind of object. $5$ could be an area of a triangle, could be the number of apples, could be the value in dollar of an object.

In your picture you have the same vectors, but they have different point of application: the first one is applied in $(0,0)$ the second one, somewhere in the third quadrant.

Vectors could also have 3 dimension, or even n dimension. So don't be confused about them: they are used to represent some concept, but actually they are just "numbers", and they can have the meaning you wish.

A truck also has magnitude and direction.(There's a lot of bad math teaching.)

Not the answer you're looking for? Browse other questions tagged linear-algebra vectors or ask your own question.

4
Why is the cross product of two vectors always orthogonal to the input vectors?
2
How do you establish the concept of direction with vectors?
1
If vectors are represented as a set of points like a coordinate, how can they be translated/moved?
2
Simplistic question about position vectors
1
Graphically representing vectors with polar unit vectors without converting to Cartesian coordinates
1
Prove that vectors are parallel iff their unit vectors are equal
0
Spherical Coordinate System and It's basis vectors
3
Do the position and velocity vectors live in the same space?
0
Intersection of two vectors with tails?