Compute angle $\gamma$ between a line and a plane if the line forms angles $\alpha$ and $\beta$ with two perpendicular lines lying in the plane.

Compute angle $\gamma$ between a line and a plane if the line forms angles $\alpha$ and $\beta$ with two perpendicular lines lying in the plane.

Here's where I think my logic gets faulty (therefore rendering this proof useless)...

Hint 1: the sum of the squares of the cosines of the angles between a vector and each of the coordinate axes is $1$. See Direction Cosine.

Hint 2: consider the two perpendicular vectors in the plane and the normal to the plane to be an orthonormal basis for $\mathbb{R}^3$. 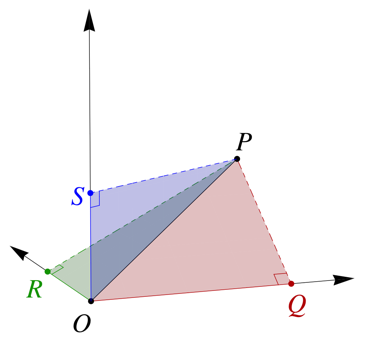 As for where you go from here, that depends on what you want to do with the answer you've gotten.

Not the answer you're looking for? Browse other questions tagged geometry proof-verification euclidean-geometry 3d or ask your own question.

1
If a line makes angles $\alpha, \beta, \gamma$ with the $x, y, z$ axes, then $\sin^2{\alpha} + \sin^2{\beta} + \sin^2{\gamma} = 2 $
0
Compute the angle between a line and a plane if the line forms the angles of 45 degrees and 60 degrees with two perpendicular lines lying in the plane
0
Way to find angle between plane and line without using vectors?
1
Exercise: Stereometry > Lines and planes > Parallel lines and planes
0
Angles of lines in space geometry
0
Finding the equation of a plane that contains a given line and is perpendicular to a given plane
1
Prove that the line which connects a point and a circle center and two tangent lines are perpendicular
0
Given a plane and a line, find the equation of another plane that has an angle 30 of degree to the given plane and contains the given line.
0
Showing that a points projection onto a plane and a line in the plane form a line perpendicular to the line
1
Geometry question with perpendicular lines and angle bisectors in triangle