What is that object?

I am currently reading an article written by John Mather called "Stability of $C^{\infty}$ mappings III. Finitely determined map-germs". I am note very familiar with algebra (basic one semester curse) so I hope someone can help me to identify the object in question (see picture below, Corollary 3).

Second question: The object in corollary 3: $C_x / m_x^k$ does it mean the quotient group or the quotient ring of the two objects?

EDIT: The more I think about it, I am sure that it is the quotient ring. But how can I imagine this set? How does the set look like? 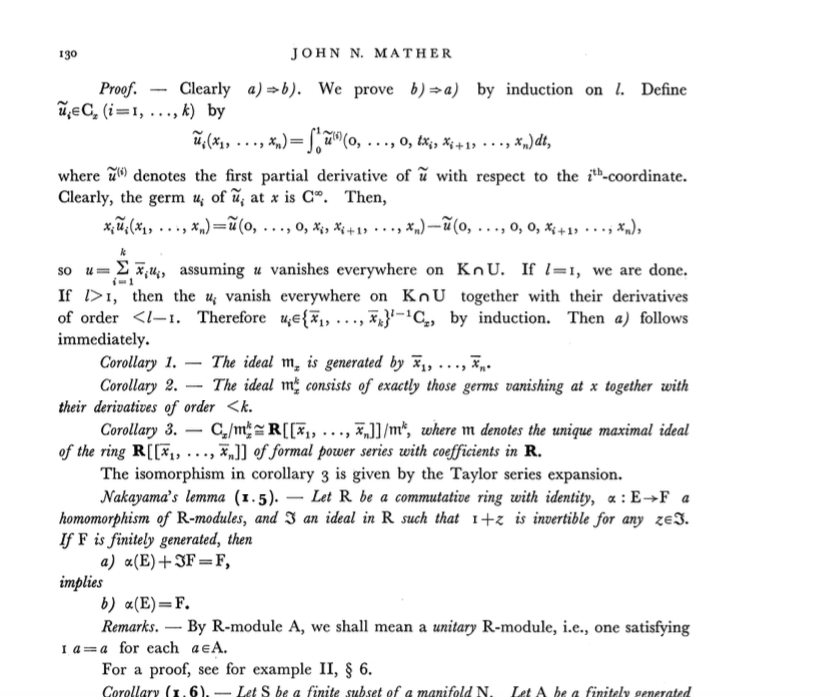 The subset $m_S^k$ consists of the finite sums of elements of the form $f_1f_2\cdots f_k$, where $f_1,\ldots,f_k\in m_S$. In other words, it is the smallest ideal containing all the $f_1f_2\cdots f_k$. Since I do not understand what product of group subsets means, can't say more here.

Concerning the last question, indeed, $C_x/m_x^k$ is the quotient of the ring $C_x$ by the ideal $m^k_x$. If you feel more comfortable with groups: if we forget the multiplication, then this quotient ring is actually the quotient group of $C_x$ by the subgroup $m_x^k$ (where, however, $m_x^k$ is still defined as above!)—that is, the elements are equivalence classes of elements of $C_x$, i.e., germs at $x$, where two germs are equivalent if their series approximations equal in degree $<k$.

Not the answer you're looking for? Browse other questions tagged abstract-algebra singularity-theory or ask your own question.

3
Ring germs of $C^{\infty}$ functions on the real line
5
Do the polynomial germs generate all the ring of germs?
17
Is there a classification of isolated essential singularities?
4
How general are $\mathrm{Aut}$ groups and $\mathrm{End}$ rings?
6
Germs and local ring.
2
Morphism in category theory
5
In a ring, are cosets always additive?
1
Orbits of general linear groups and rational canonical form
1
Is there in fact a category of rings in which $ \mathbb{Z} $ is initial?