Why does partial differentiation give centre of a conic?

Definition of centre of conics states that, "The point which bisects every chord of the conic passing through it is called centre of the conic"

General equation of second degree is $S:ax^2+2hxy+by^2+2gx+2fy+c=0$ If we partially differentiate $S$ with respect to $x$ and $y$, and then set both partial derivatives to $0$ . Solving two equations give centre of conics. Could someone explain simple logic behind this approach i.e. why we get centre using above methodology?

Notice first that not every conic section has a center: another way of stating the given definition is that the center is the unique intersection of all axes of symmetry of the conic section. For an ellipse, this means that this center (if it exists at all) must be at the intersection of the major and minor axes, i.e., what we normally think of as the center of the ellipse. Similarly, for a hyperbola, the only candidate is the midpoint of the vertices of the two branches, which is also the intersection point of the asymptotes. I’ll leave it to you to prove that these points indeed satisfy the definition in your question. For a degenerate hyperbola, that is, a pair of intersecting lines, the center is clearly going to be at the point of intersection. For the degenerate ellipse—a single point—we can define the center to be the point itself.

No other conics have a center. For a parabola, there is no point that can serve as a center of symmetry. If there were one, it must clearly be somewhere on the axis of the parabola, but it’s not hard to show that such a point bisects only the chord that’s perpendicular to this axis. For the other degenerate conics—a pair of parallel lines and a single line—there are an infinite number of points that satisfy the definition, so there’s no distinguished center.

The above derivation certainly works, but I find it somewhat unsatisfactory because the partial derivatives appear out of nowhere at the end. Here’s a somewhat informal geometric argument in which they enter naturally. In the non-degenerate cases we care about, the equation $z=Q(x,y)$ represents an elliptic or hyperbolic paraboloid (depending on the sign of the principal minor of $A_Q$). 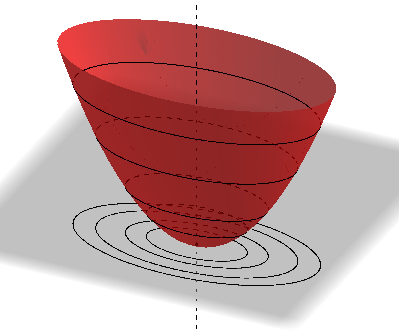 In the first case, consider a paraboloid of revolution. If we fix $z$, the resulting level curve is a circle, and varying $z$ generates a family of concentric circles. The center $(x_c,y_c)$ will be at the vertex of the paraboloid, which is a local extremum of $z=Q(x,y)$, hence $\nabla Q(x_c,y_c)=0$. We can obtain any elliptic hyperboloid from this surface by applying an affine transformation, which preserves ratios of distances along the same line and intersections of lines, so the resulting family of ellipses will also be concentric. 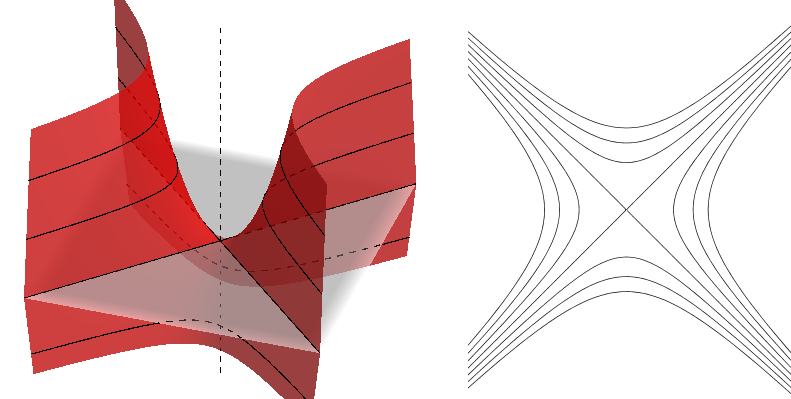 For the second case, the level curves form a family of hyperbolas with common asymptotes, so their center is at the intersection of these lines as we noted above. When the plane $z=k$ passes through the saddle point of the surface, we get the degenerate hyperbola consisting of the two asymptotes, and they intersect at the saddle point. So, the center of this family of hyperbolas is also at the point $(x_c,y_c)$ where $\nabla Q(x_c,y_c)=0$.

1
How does the paritial derivative method to find point of intersection of pair of straight lines work?
12
How to find center of a conic section from the equation?
3
Point of intersection of pair of straight lines.
0
Cone and ellipse equation
0
If the equation of rectangular hyperbola is $2x^2+3xy-2y^2-6x+13y-36=0$ and the equation of its asymptote is $x+2y-5=0$, find the other asymptote
0
Find the center radius an equation of the sphere and sketch.
0
convert elllipse conic representation to parametric representation
0
Finding the vertex of the parabola $x^2+4xy+4y^2+2y+2x+75=0$ using differentiation
0
Determining a parabola and its center from general equation of conic
0
what does this graph represent
See more linked questions