Construct Parabola given two points and axis of symmetry

By constructing the parabola I mean

Algebraically this is easy to solve, and I have translated the solution to a geometric construct in GeoGebra.

My problem is that I've basically just constructed the desired lengths (the vertex coordinates and the focal length) "somewhere else" and then shuffle the lengths to the appropriate place. As can be seen in my GeoGebra worksheet, this doesn't tell me why the focus and the directrix satisfy the "length-matching" criterion for a parabola.

What I am hoping for is an informative compass-and-straightedge construct, where lengths are built around the given two points and the axis of symmetry, showing geometrically why/how the lengths equal $\overline{P_iF} = d(P_i,\, \Gamma)$ for $i =1,2$

Below are some details regarding my algebraic formulation that got translated into my GeoGebra worksheet. Feel free to skip it:

The given two points can be on the same side of $L$ or they can be on opposite sides. It doesn't matter since one can obtain the mirror images and end up with 4 points.

(one might wonder why I don't set the axis of symmetry as one of the coordinate axes$\ldots$ well, I made a bad choice I guess)

One uses Pascal's theorem for hexagons inscribed in conics. The hexagons do not need to be convex and embedded, but the order of the points (following cyclicity) is important.

Georg and Futurologist have answered my question solidly, and I'm here posting another answer I got from Georg's hints just to add some variety.

I guess I spotted this construction because I had a more shallow understanding of the Pascal's Theorem, ha :P

Before stating the construction, I shall make some observations with two figures.

The hexagon in the Pascal's Theorem can be formed by connecting the points in any order, and just below is a more simple-minded arrangement on an ellipse. 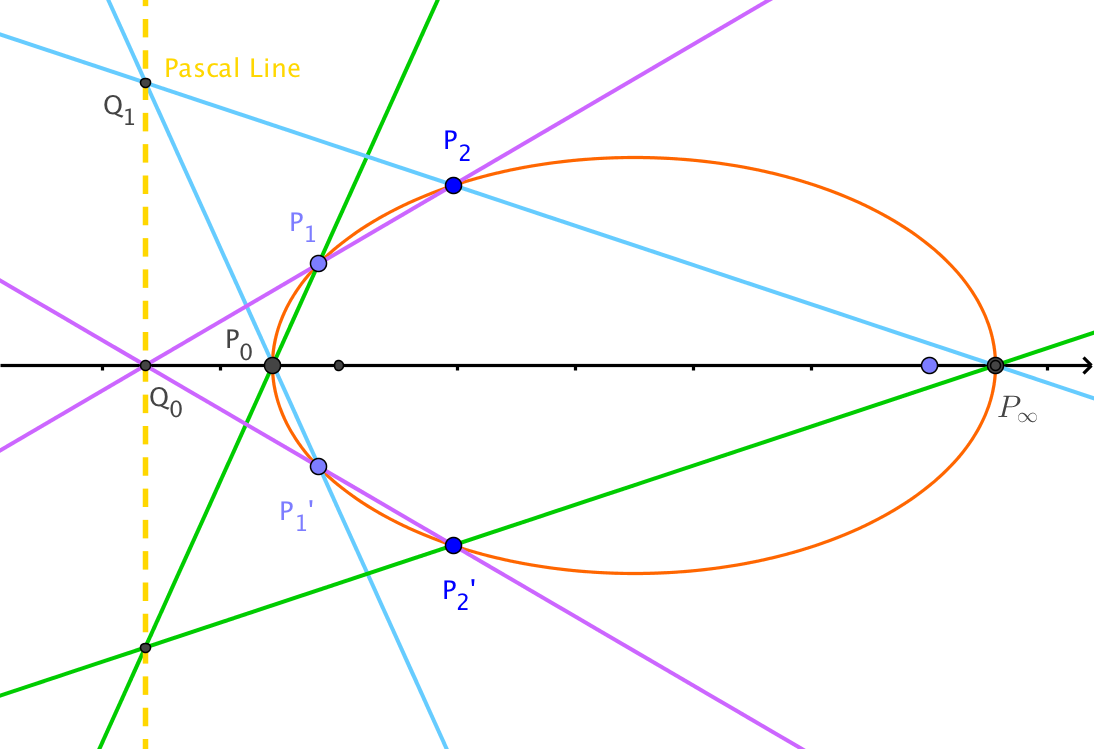 Now we bring the right most vertice $P_{\infty}$ to infinity and have a parabola, with the symmetry and orthogonality intact, as the figure just below: 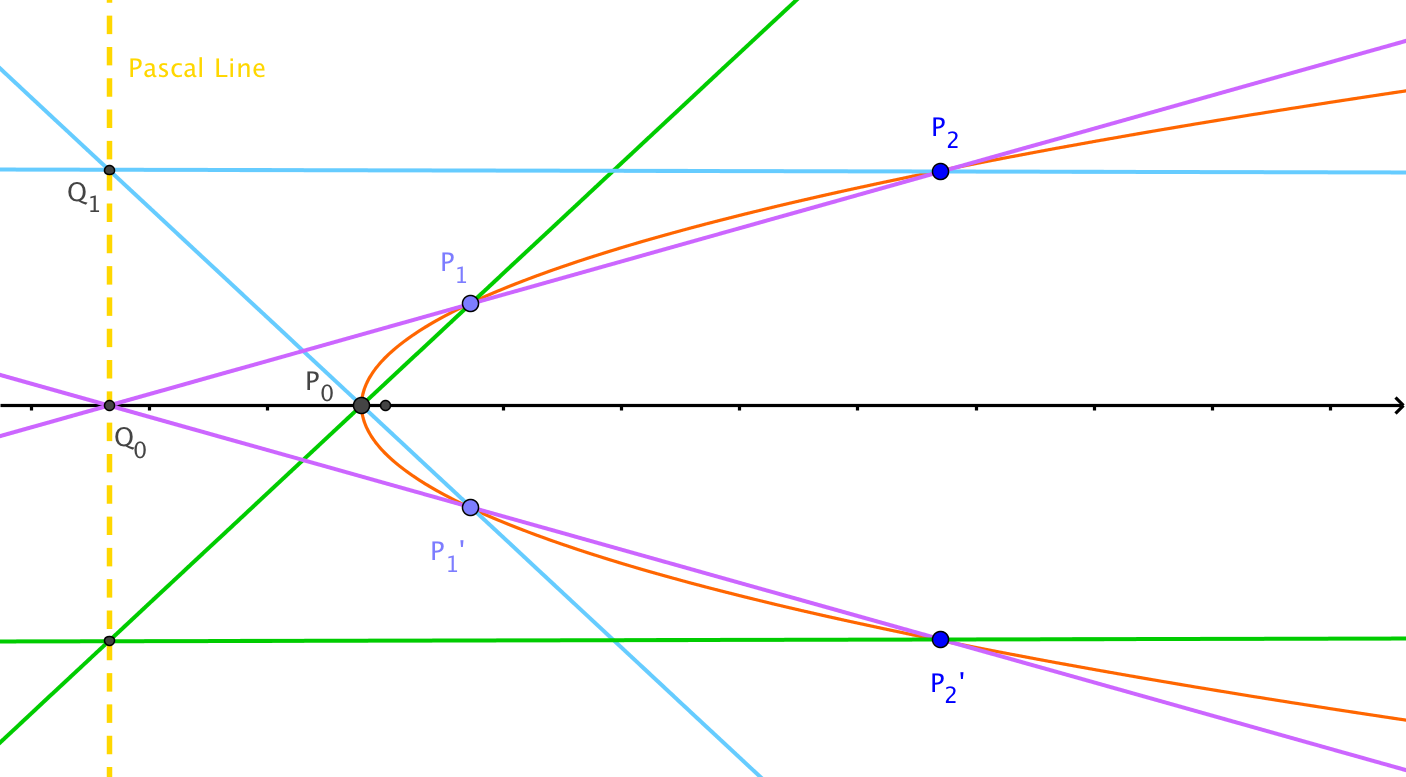 Here begins the construction (see a figure below): 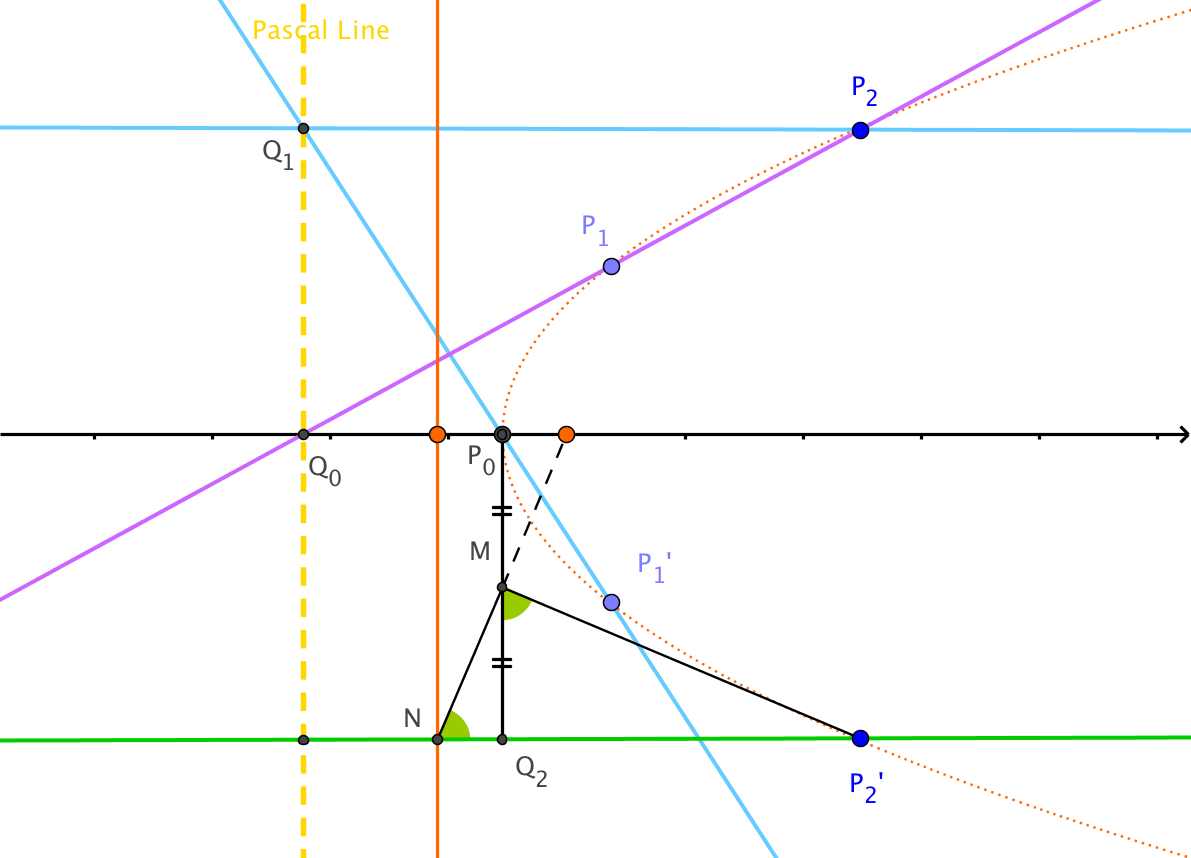 I have checked algebraically that this construction is correct. I wonder if there's a way to NOT invoke the Pascal's theorem in the argument for this construction. Basically I would need to prove that the directrix-focus pair constructed based on $P_2'$ through this special point $P_0$ (which we know is the vertex of the parabola) is the same directrix-focus pair based on $P_1'$.

Example (the tangent line at point P1 on Pascal's theorem)--> vertex V and so on. 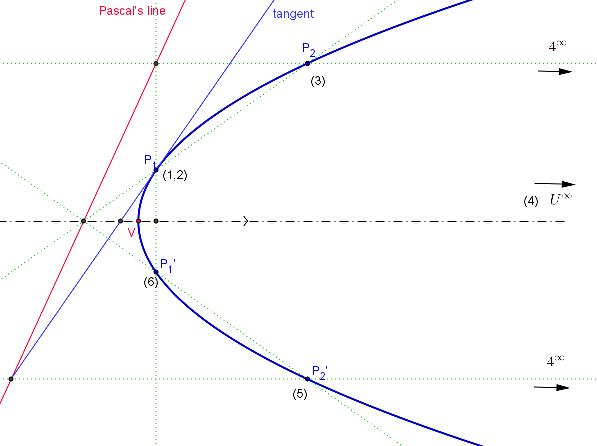 Pascal's line is given two points - the intersections of the lines

Through of the third point of intersection passes the tangent line:

1
Prove that the locus is a parabola
2
Formula of parabola from two points and the $y$ coordinate of the vertex
0
Finding parabola parameter given 2 points
0
Finding $p_1^2-p_2^2$, given parabola, focus and two points.
2
Prove that a triangle with given base and height, formed by the tangent of a parabola, shares an angle with a given right triangle.
4
Parametric Parabola: Axis of Symmetry and Tangent at Vertex
3
Finding the vertex, axis, focus, directrix, and latus rectum of the parabola $\sqrt{x/a}+\sqrt{y/b}=1$
0
How to construct a parabola given its focus and two points on it