How many turns can a chess game take at maximum?

The shortest number of moves that a game of chess can have is 2, as far as I know:

Which results in this situation: 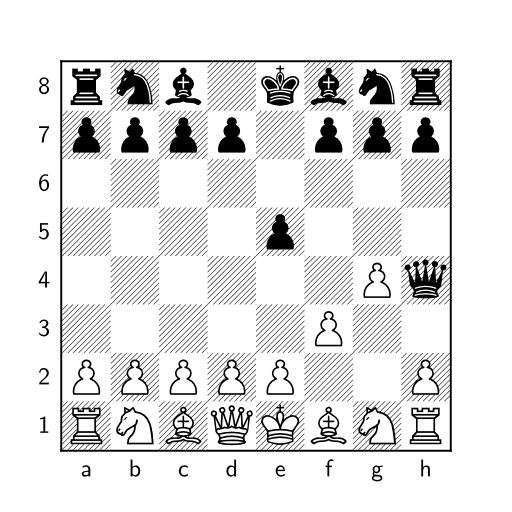 There might be more games which end after 2 rounds, but as far as I know there is no game with fewer rounds / moves.

How many moves do the longest games take?

I thought I have read that the number is about 8000 moves.

A finite maximum number exists, because of the fifty-move rule and threefold repetition and I assume that players claim draw by those rules if possible.

Please link also to the source of your information!

edit: Jacob Schlather mentioned a blogpost with this information

[...] The Belgrade Marathon was a contest between Ivan Nicolic and Goran Arsovic that lasted over 20 hours and ended in a draw after 269 moves due to the so-called “50 Move Rule”, [...]

So the longest game that was actually played took at least 269 moves. Later he explains how he comes to 5,870 possible chess moves.

There is no upper bound on the length of a legal chess game. All that is required is for the game to reach a position where the threefold repetition rule would apply, and for neither player to claim the draw. The same position could recur over and over, and so long as neither player claims the draw, the game can continue indefinitely.

Longest game that can be played with neither player having the opportunity to claim a draw under the 50 move rule (or any other rule): 5898 moves.

Longest game that can be played under current FIDE rules without being automatically drawn: 8847.5 moves.

Explanation: Each pawn can make 6 moves on the way to promotion. To do so without capturing each other, 8 pieces have to be sacrificed along the way (to open up the files for them to pass each other), leaving 22 pieces after all the promotions (plus the two kings). Those 22 pieces can all be captured, but the last capture ends the game (as King vs King is an automatic draw based upon insufficient material to bring about checkmate). Being forced to occasionally (four times) switch the side moving the pawns/making the captures (first to open up all the files for the pawn moves, and later to finish capturing all the pieces) means that four half-moves--two moves--are lost. (Only a minor amount of cleverness is needed during the stalling moves to insure that there is no possible claim of draw due to threefold repetition of position.)

Most internet sources I have found (for instance, Sonny_E's comment on the blogpost mentioned in the question, and many sites he lists) show that this leads to the following calculation:

It might seem (it did to me) that the calculation should use 49.5 moves instead of 50, to avoid allowing each player to claim a draw immediately before every capture or pawn move, since 50 full moves will have passed since the last such event. However, the 50 in this calculation includes 49.5 stalling moves, and then adds the pawn move/capture for a total of 50.

White can win on his 5898th move (having one piece left), but if he does not, Black must finally be able to claim a draw on his 5898th move: he can capture White's last piece (if possible) and force a draw base on insufficient material to mate, or his move can leave White's piece alone, letting him claim the draw based on the 50 move rule, the first time that rule could be invoked the entire game.

But the players may not want to claim draws at all, or even entertain the possibility of drawing, and so intentionally avoid making claims and risking draws. FIDE recently added a 75 move rule (9.6b) that automatically draws a game without recent pawn move or capture regardless of either player's claiming a draw (or even being made aware of it). Doing the same calculation with 74.5 moves in between captures/pawn moves gives 8848 moves, the longest possible chess game under current FIDE rules. Black's 8848th move would automatically end the game based on the 75 move rule (or on the insufficient material rule, since Black could only avoid that rule by capturing White's final piece, leaving King vs King). Hence the longest possible non-drawn game would involve White checkmating Black on his 8848th move (or either player resigning just before Black's 8848th for that matter, since it is that move that causes the draw to happen, and resignations can still be offered even if the next move would necessarily result in a draw).

Each of the 16 pawns can move at most 6 times and there are 30 captures possible. Therefore $(16\cdot6+30)\cdot 50=6300$ is a rough upper bound (for example, not all pawns can make it to the opposite line without sometimes capturing - which would mean that sometimes pawn move and capture occur together).

Not the answer you're looking for? Browse other questions tagged combinatorics recreational-mathematics combinatorial-game-theory or ask your own question.

34
Guaranteed Checkmate with Rooks in High-Dimensional Chess
48
The expected outcome of a random game of chess?
17
Is 39 moves the longest a chess game can go moving only pawns?
1
Winning or losing in chess - a question of combinatorics?
0
Maximum number of chess moves
3
What is the optimal losing move?
6
Combinatorics - prove white can always force a win or draw in double chess
2
Does an unsolvable game exist? (And can you formulate an example?)