I recently read the proof of why every convergent sequence is a Cauchy sequence and the mechanics of the proof make total sense to me. However, the proof is rather different from what my intuitive brain pictured. Let me explain. For a convergent sequence we know the sequence $\{ x_n \}_n$ is converging to a specific point say $x$. What this means to me intuitively is the following picture: 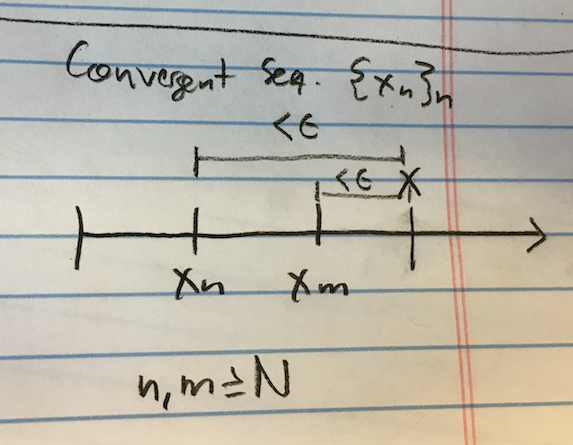 Is the constant to loose or do I have a fundamental misconception of how the proof should have turned out?

Maybe I'll try to explain the proof in my own words and reveal my misunderstanding?

In general you do not have $\Vert x_n−x_m\Vert \leq \Vert x_n−x \Vert$. Just draw your picture slightly different, namely let $(x_n)_{n\geq 1}$ approach x not only from the left, but from both sides. This is exactly where the factor 2 is coming from.

This sequence converges to $x=0$. We have

then you could have

Not the answer you're looking for? Browse other questions tagged real-analysis convergence-divergence proof-explanation cauchy-sequences or ask your own question.