How to know if a figure is inside another figure

I need to invent an algorithm for determining if a figure is inside another figure. Until now this was done using only straight lines (circles were replaced by a list of straight lines). In that case the following algorithm was used:

Obviously this algorithm is only applicable when both figure1 and figure2 are composed out of straight lines. Once you are dealing with arcs (pieces of circles) then the situation becomes more difficult, as you can see in following image: 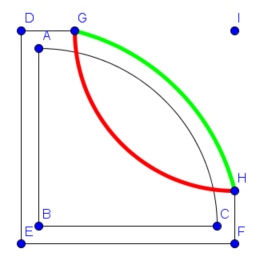 Does anybody have any ideas on how to implement this algorithm? (any idea, even not complete, is welcome)

I think that in the general case you need to consider Boolean operations on conic polygons.

Here are two papers on this subject that Google found:

Not the answer you're looking for? Browse other questions tagged geometry algorithms computational-geometry or ask your own question.

1
Handling points to get closed Cycles
2
Convex Hull Algorithms
4
Working out an algorithm for finding out whether a point is in or outside of a 2D closed polygon
2
What is inside and outside of complex polygon?
5
Longest chord inside the intersection area of three circles
3
Say i have $n$ points in the plane all of which are connected. What is the minimum number of intersections between the connecting lines?
0
Straight Skeleton "Opposite Edge" of V