I had just now seen that the following is actually an axiom.

But how did we come up with the idea that the area of a triangle is given as by that?

Why not something else?

If you take a triangle whose base is horizontal, and make a second, rotated-by-180-degrees copy, you can move the flipped-over copy up next to the original to make a parallelogram. That parallelogram should have TWICE the area of the original triangle, right? Because it's made up of two copies.

Now I want to figure out the area of the parallelogram. I'm going to cut-and-paste in a way that doesn't change its area...and turn it into a rectangle whose width is the same as the base of the triangle, and whose height is the same as the height of the triangle. Its area is therefore $b \times h$, and so for the original triangle, we have$$ 2 \times Area = b \times h \\ Area = \frac{b \times h}{2} $$

I'm hoping the pictures below help you see this. 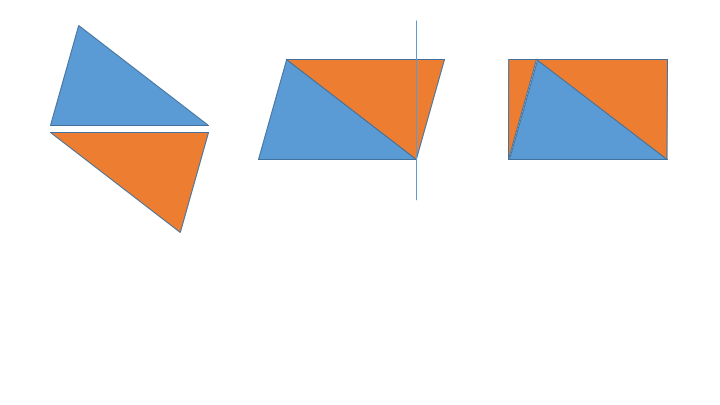 An alternative reason for the definition is this: if you cut a bunch of pieces of paper with varying widths and heights, and record $b \times h / 2$, and then record the weight of the paper next to that, you'll find that the two columns you end up with are proportional. You can actually choose any (positive) constant of proportionality that you like to define a consistent notion of area, but it's nice for a 1 inch by 1 inch square to have area 1 square inch, which the $bh/2$ gives you, so most people settle on that.

Not the answer you're looking for? Browse other questions tagged geometry triangles area axioms or ask your own question.