Both players start with $\$n$

Each player antes $\$1$ and rolls a private 100-sided die so that they are the only one that sees the result.

Player 1 chooses to either check keeping the stakes at $\$1$ or raise increasing the stakes to whatever integer amount he wishes.

If Player 1 checked then Player 2 can choose to either check as well ending the round in which the results of the rolls are revealed and the player with the higher roll receives the $\$2$ pot. Alternatively Player 2 can raise the stakes to whatever integer amount he wishes.

If Player 1 raised then Player 2 can choose to either fold, call, or raise. If Player 2 folds then he forfeits the pot to Player 1. If he calls then the rolls are revealed and the player with the higher roll wins the pot. If he raises then play returns to Player 1. Betting continues until either player calls the other player's raise.

If there is a tie and neither played folded then the pot is split.

Given this game what is the Game Theory Optimal play for each player?

This is a very interesting question. I do not have a full answer, but I will write my thoughts here, hopefully pointing towards a solution. But first a disclaimer: I do not have much experience with game theory, so I might be missing important parts of the problem.

Some observations: There are 2 moves available at the beginning of each game: check and raise. Depending on the first move, we have either 2 or 3 moves to choose from. We can respond to a check with a check or a raise. We can respond to a raise with a fold, call, or raise. These 3 moves are also all the moves we have available if the game continues beyond the second move. A game ends when the first two moves are checks, whenever we have a call, or when we have a fold.

The raise move has an extra decision: the raise amount. Let's assume that the minimum raise is \$1 and any raise is a multiple of \$1. A decision (kind of move, and if raise, the raise amount) can be a function of the following parameters:

A key observation is that the optimal strategy should perhaps have an element of chance in it (apart from the value of our dice). This is a game that has hidden information. Our moves can leak information about our dice value. A way to reduce or even eliminate leaked information is influence our decisions based on random variable(s).

For example think of the game paper-scissors-rock. The optimal strategy there is to choose each item with probability 1/3. If you do anything else, your opponent has the opportunity to exploit your most frequent item. Moreover, whatever your opponent plays you are guaranteed the average gain of 0 in the long run.

Our game is more complex than paper-scissors-rock and maybe some information can be leaked during the play. However, if we want zero information leaked, one way to achieve it is not using our dice value to influence our decision, but instead rely on an (internal) random variable. As I will show below this is not a very good strategy.

To get a feel of the problem let's study some simple static strategies. Static in the sense that they do not change/adapt to betting patterns.

For example, think about an 'honest' strategy where we raise $\$x$ only when we think we have a better chance to win (i.e. our dice value $> 50$). Let's name this strategy $H_{0.5}$ As another example, think of a random betting strategy based on a predetermined raise probability p. That is, we will raise $\$x$ with probability p. Let's name this strategy $R_{p}$. Both $H_{0.5}$ and $R_{p}$ are static strategies, they are not concerned with what the other player is doing. This means that if our internal state (e.g., our dice value, or our own random variable) says we should raise, we just do it. Rounds played with static strategies end in 2 or 3 moves: (check, check), (check, raise, fold), (raise, fold), (raise, call), (raise, raise, fold). The last one happens when both strategies want to raise, and the second player's strategy has a higher raise amount. Notice that there are no re-raises for the same player. We just decide on the amount to raise and we do it in one move. Extending static strategies a bit more, we should make them immune to a basic form of attack. The way we have set it up, if a static strategy goes first and it does not raise, the other player can deduce that it does not want to raise. So the second player can always raise to force a fold. The remedy to this is if a static strategy goes first, it always checks. This adds the following possible plays: (check, raise, call), (check, raise, raise, fold) 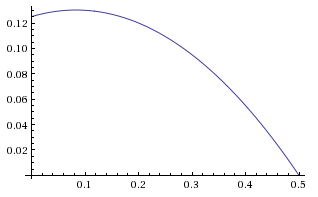 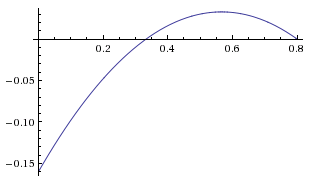 These are parabolas as we expected by looking at the formula. They all have an obvious root at $a=b$. In other words, it is obvious that we should get zero gain if a strategy is pitched against itself. The other root depends on b. Our first example ($b=0.5$), has no other root in the interval $[0, 0.5]$, making the gain positive for the whole interval. Our second example ($b=0.8$) has another root at $a=1/3$, making the gain positive only in $[1/3, 0.8]$ We can find the roots to the general gain expression above. The interval between the roots is where the gain is positive. Using the automated equation solver at quickmath.com I found the roots to the general expression: $$a=b$$ $$a=-\frac{2x(b-1)+b}{b-2}$$

Here are some examples of what we get for different values of x:

This seems similar to the results we got when we were comparing honest strategies against random ones. There is a crucial difference though. The positive gains found over $R_p$ were holding for any value of $p$ i.e., $p \in [0,1]$. Now we are restricting ourselves to values of $a$ that are smaller or equal to $b$. If $a$ goes beyond $b$ it is obvious that we can have negative gains.

Another issue is the choice of $x$. In the analysis above it was assumed that $x$ is the raise amount that both are playing with. A player cannot really choose $x$. If they choose a high $x$ the other player can reject this, even if they want to raise (with their own low amount). We can adapt the formulas to adjust to the lowest raise amount situation, and I'll discuss this a bit in the end, but we already have an interesting game when the raise amount is $x=1$

quickmath.com gave these solutions to the integrals 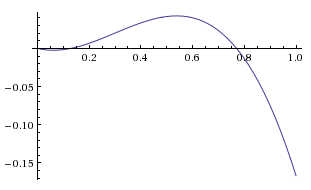 We can also check whether our calculations are correct. If we find the average over all average gains, this should be zero. Indeed, integrating $\widehat G$ over all b we get $0$. We notice that the gain is not uniform across $b$. This poses a game theory problem. If we had a uniform function equal to $0$ then we would know what the optimal strategy would be: each time choose randomly a number $b \in [0,1]$ and implement $H_b$. The gain would be $0$ but this strategy could not be exploited. Now with a non uniform $\widehat G$ I am not sure if there is a solution. We start by noticing that if your opponent selects $H_a$ where $a$ is uniformly selected from $[0,1]$ then there is an obvious advantage for you to pick $H_b$ where $b$ is uniformly selected from [0, 0.77]. You end up with positive gain. Could this be exploited? Could your opponent knowing that you are choosing from $[0, 0.77]$, gain by selecting only from $[0.77, 1]$. Let's find out. Calculate what is $\widehat G_{a=0..0.77}(H_b, H_a)$ for $b > 0.77$. This is what the graph looks like: 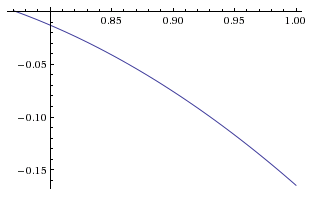 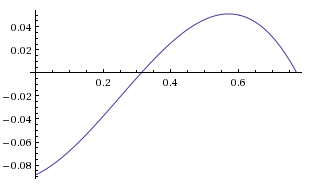 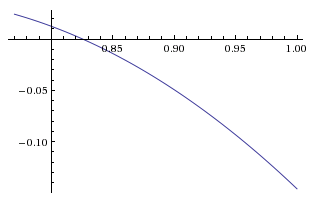 So an exploit exist! If the other player chooses in $[0.77, 0.825]$ they have a positive gain. So we are back in these loops even with diversifying our strategies by randomly selecting the strategy parameter within an interval. This is where my game theoretic knowledge abandons me. Given this non-uniform average gain function, can we find an equilibrium, or do we declare that an equilibrium does not exist? If an equilibrium exists I suspect that it is achieved with a non-uniform selection of the strategy parameter. A selection that will in effect normalise the average gain function into a uniform one. I will actually create a question in math.stackexchange about this.

Update: I read a bit on game theory and I have a better understanding now. First, let me point out that we can make the Honest strategies discrete without losing the generality for the game. So instead of having a continuous parameter $a$ for $H_a$ we can make it discrete and finite based on all the different values the dice can take. In this case, the theory tells us that there is at least one mixed strategy that leads to a Nash equilibrium. But I believe we can find a mixed strategy equilibrium even for the continuous case. My intuition before was on the right track. We need to find a probability density function for selecting $b$ in $H_b$ that makes our average gain against any opponent $H_a$ to be $0$. This involves solving a differential equation where I am a bit stuck. I asked a question about it here

You probably noticed that we have not discussed bluffing in the game. For a fixed raise amount $x=1$ it was implicit in my answer that bluffing is not beneficial and in general the only strategies that are worth studying are the $H_a$ strategies. This needs to be proven, but a proof can be based on the following sketch: bluffing does not change the behaviour of the $H_a$ strategy if $x=1$. $H_a$ will raise when it decides to and fold/check otherwise. By bluffing the other player is essentially implementing a certain $H$ strategy, let's call it $H_c$ but with lower gains than the true $H_c$ strategy. For example, imagine that we have chosen to implement strategy $H_{0.7}$ and we also have a probability to bluff. Say that our dice is 0.2 and we draw/decide to bluff. This means that we will raise. We would have raised if we had chosen a straight (no-bluffing) $H_{0.1}$ strategy. Only difference is that now our dice value is ranging in $[0.1, 0.7]$ instead of the true honest $[0.1, 1]$, resulting in lower gains. This argument works in the opposite way too (bluff to not raise).

But when we allow $x$ to be set freely by the players, the dynamics of the game really change. It is no longer the case that the behaviour of the $H_a$ strategy remains unchanged. Because we can have different raise amounts, one strategy can decide to raise, but seeing a higher raise by the other player, it can fold. So an obvious exploit against an honest strategy is to always go "all in" forcing folds most of the time. I have not studied this part of the game yet.

Hopefully I have started a meaningful discussion on the problem. Really interesting problem as I said in the beginning.

Not the answer you're looking for? Browse other questions tagged probability-theory game-theory dice gambling or ask your own question.