A problem about oriented face in Square grid

Consider a $n \times n$ square grid (finite) (a square is divided into smaller squares by lines parallel to its sides). The boundary of the square is oriented, (clockwise or anticlockwise) that is, a direction is chosen on it and fixed, such that if you move in that direction along the boundary, the internal points of the square always stay on your left or on your right (depending on the orientation). For each of the internal edges of the subdivision, a direction is specified, such that for each interior vertex, there are exactly two edges coming to the vertex and two edges going away from it (see diagram below).

Then my question is that does it follow that there is atleast one oriented face in the subdivision? 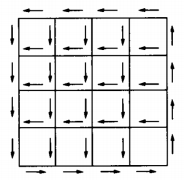 (For example in the figure, there is exactly one such face, namely in the extreme lower right corner).

Yes. More generally, in an $m\times n$ grid ($m,n \in \mathbb{N}\setminus \{0\}$) where the edges are oriented satisfying these conditions there is always at least one square whose boundary is oriented like the boundary of the whole grid.

Not the answer you're looking for? Browse other questions tagged discrete-mathematics logic graph-theory or ask your own question.

13
Number of simple paths between two vertices on an $n \times m$ square-grid graph?
2
Planar graph with triangular faces in which the link of every vertex bounds a face
2
Conditions on face length in planar graph
2
Drawing Arrows on a Cubical
0
Prove that a planar graph with all vertices degree 3 must has a face with at most 5 edges.