When do $n$ ants in cyclic pursuit with constant velocity converge?

I'm reading a paper (Ants, Crickets and Frogs in Cyclic Pursuit) and trying to understand one of the simpler results.

The following is a paraphrasing of the parts I'm using, but check the paper if more context is needed:

We can construct an equivalent model in barycentric coordinates by defining

For this system, we can prove the following:

$\textbf{Proof:}$ The first part follows by definition and the second comes from projecting $\mathrm{y}_{i-1}$ onto $\mathrm{y}_i$.

Then comes the part I'm most curious about. They claim

which would prove the claim, but the inequality is where I get stuck.

I'm thinking we can bound the sum somehow by using the fact that $\sum_i \alpha_i \ge 2\pi$, but I'm not quite sure how to do this.

Edit: It appears this claim is false as pointed out by @stewbasic.

I'd still like to get answers for the following:

For simultaneity, a sufficient condition is fine provided it covers the specific case of cube. For example, if a cycle of $n$ ants all start a constant distance $\mathrm{y}(0) = ||\mathrm{y}_i(0)||$ from their pursuer and prey and all start the same distance $d$ from their centroid, is this enough to ensure simultaneity of collision? If it simplifies things, the time bound need only apply to cases that satisfy the sufficient condition for simultaneity.

Specific case: Consider $8$ ants on the corners of a unit cube with pursuit cycle given by

I'd ideally like to get the bound $T \le 2/v$, but even $T \le 8/v$ would acceptable. The actual value is about $1.96$, which I can get from simulation where their convergence path looks like this: 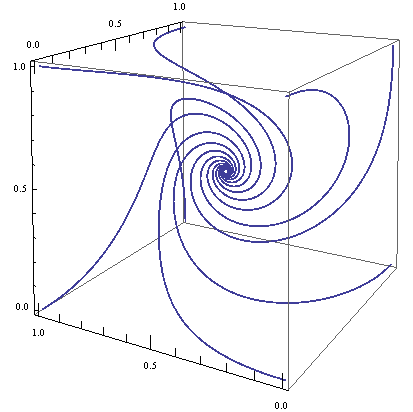 Here's an animated version I created:

As @VictorZurkowski points out, the proof of Theorem $1$ includes a (not very strict) bound on $T$ which reduces in the constant velocity case to

where $m$ is the number of survivors. For the cube case with unit speed, this becomes 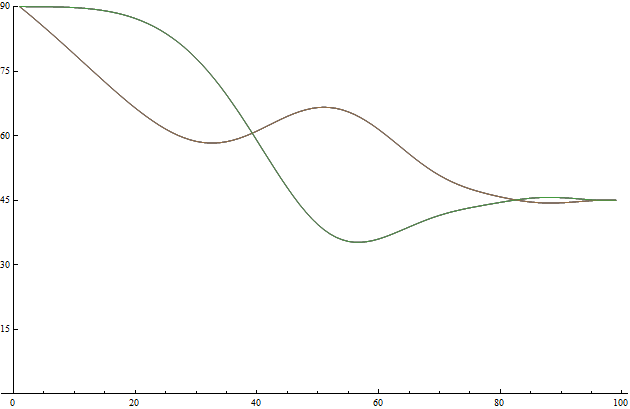 I believe the planar case is worst case in terms of convergence time and this website has some nice bounds for regular polygons with unit area. If my calculations are correct, an octagon with unit length sides would have path length $2\sqrt{4+3\sqrt{2}} \approx 5.742$.

[To be revised and continued...]

In particular, @stewbasic basic example does not contradict the statement, since in that case the number of survivors by temination time is $n$.

In your example of 8 points at the vertices of a cube, whether $T\le 2$ depends on the speed $v$ that you are considering.

Not the answer you're looking for? Browse other questions tagged linear-algebra ordinary-differential-equations dynamical-systems proof-explanation or ask your own question.