Why do complex function have derivatives?

I'm sorry if I sound too ignorant, I don't have a high level of knowledge in math.

I'm really confused about this. If we define the derivative of $f(z)$ as the limit as $h$ approaches $0$ (being $h$ a complex number) of $(f(z+h)-f(z))/h$, then clearly the derivative is $2z$, but what does this derivative represent??

Also, shouldn't we be able to represent a complex function in 4-dimensional space, since our input and output have 2 variables each ($z=x+iy$) and then we could take directional derivatives...right?

But if we define the derivative as above, it would be the same if we approach it from all directions. That's what's bothering me so much.

I would really appreciate any explanation. Thanks!

That's precisely what we do.

then clearly the derivative is $2z$, but what does this derivative represent??

Well, it represents what we have defined: the limit of the incremental ratio, same as in the real case. Probably you're wondering if we can interpret this complex derivative geometrically or visually, as we interpret the (real) derivative as the slope of the tangent line... There is no such a simple pictorial interpretation.

Also, shouldn't we be able to represent a complex function in 4-dimensional space, since our input and output have 2 variables each ... and then we could take directional derivatives...right?

Indeed, you could consider each of the two components (real and imaginary) separatedly, both for the variable and for the function, and then you'd get four (real) derivatives. And, yes, it's natural to ask how these four derivatives are related to the complex derivative, and if there are some (necessary and/or sufficient) restrictions on them so that the complex derivative gives the same value no matter the "direction" (as one would want)... Behold the Cauchy–Riemann equations and holomorphic functions.

You're correct that drawing the graph of a complex-valued function of one complex variable entails four-dimensional plotting. Drawing the image of a Cartesian grid, however, is perfectly feasible in the plane: 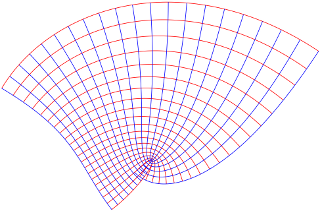 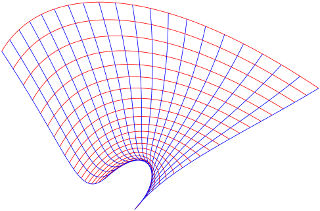 Each map above is defined by a pair of real cubic polynomials; the red curves are the images of vertical lines; the blue curves are images of horizontal lines. The maps differ in the sign of one component of the cubic term. One map is complex differentiable (or holomorphic), one is not.

The holomorphic map sends a square grid to an "infinitesimally square grid". (There is one critical point, whose image is visually apparent.) The derivative $f'(z_{0})$ at a point determines the size of the image (quasi-)square and the angle of rotation compared to the original Cartesian square.

The non-holomorphic map sends a square grid to a grid of curvilinear parallelograms that are not generally squares. This is the geometric manifestation of the directional derivatives at $z_{0}$ depending on the direction of approach to $z_{0}$: The Cartesian grid in the domain "gets stretched and rotated by differing amounts in different directions at a single point."

The complex derivative shouldn't be thought of as representing a "gradient" as such, but rather as a set of instructions for approximating a function near a point where it is differentiable.

When working with more general functions, it is actually somewhat useful to treat $z$ and $\bar{z}$ as 'independent' variables, so that you can do calculus more conveniently. e.g. rather than working with $|z|^2$, you'd use $z \bar{z}$, whose differential $\mathrm{d}(|z|^2)$ is easy to compute as $z \mathrm{d}\bar{z} + \bar{z} \mathrm{d}z$. This can be more convenient to work with that $\mathrm{d}x$ and $\mathrm{d}y$, because you get to exploit complex derivatives and arithmetic.

In these terms, the complex differentiable functions are precisely those functions that 'depend' only on $z$ and not $\bar{z}$.

From the point of view of the Taylor's theorem (which, I think, is geometrically the “correct” one), the derivative of a complex function (along with its value) represents exactly the same thing as the derivative of a real function: a linear approximation of the function at the point. If $f$ is differentiable at $x_0$, then $$ f(x_0+\Delta x)=f(x_0)+f'(x_0)\cdot \Delta x+o(\lvert \Delta x\rvert). $$ The theorem holds over reals and over the complex numbers, along with its generalizations, to higher dimensions and higher derivatives, which motivates the respective definitions.

In a sense, your question of "why shouldn't the derivative change when you approach from different directions" in the reason why complex analysis works the way it does. In the real case, $f'(x) =a$ means that for small changes $\Delta x$ of $x$, we get small changes $a\Delta x$ of $y$. It's the same in the complex case, but now $a$ is a complex number, so $\Delta x \mapsto a\Delta x$ behaves, as a map $R^2 \to R^2$, as a rotation and scaling of the complex number $\Delta x$, which you can think of as a vector in $R^2$. Thus multiplication by $a$ can be thought of a linear transformation transformation $R^2\to R^2$, just as the usual derivative of a function $R^2 \to R^2$.

Not the answer you're looking for? Browse other questions tagged complex-analysis derivatives complex-numbers partial-derivative intuition or ask your own question.

3
Simplification of complex conjugates
1
How to integrate $\cos(z)~dz$?

4
Weird stuff happening with complex numbers on a ti-84
38
Does this pattern have anything to do with derivatives?
13
What is the meaning of $dz$ in Complex Integrals?
0
Do multivariable functions have only one derivative (at each point)?
1
What is the Fréchet derivative?
3
Intuition with Complex Derivatives of a Complex Variable.
3
Why isn't $\bar{z}$ differentiable?