What is the intuition behind a function that is not continuous at a point but its partial derivatives at that point exist? 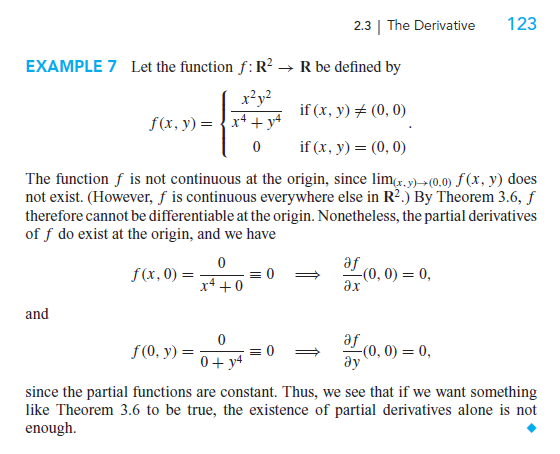 The existence of partial derivatives for $f:\Bbb R^n\to \Bbb R^p$ at a point $a=(a_1,\dots,a_n)$ where $f$ is defined (see edit and comments below) corresponds to the differentiability of the (single-variable) functions $$f_i : x\mapsto f(a_1,\dots,a_{i-1},a_i+x,a_{i+1},\dots,a_n)$$ for $1\leq i\leq n$. In other words, $f$ is differentiable (hence continuous) when restricted to the lines parallel to the $n$ coordinate axis of $\Bbb R^n$ passing through $a$. But this doesn't suffice to ensure continuity of $f$ because this continuity means that $f$ is continuous when restricted to all the directions around $a$ (not only the directions of the coordinate axis). For example, see my answer in Differentiability of Multivariable Functions

Edit: A function which is undefined at a point $a$ can't have partial derivatives at this point (simply because the functions $f_i$ of my answer above are undefined and hence, as in single-variable calculus, they have no derivative at this point because the quotient $\dfrac{f_i(h)-f_i(0)}{h}$ doesn't make sense, since $f_i(0)=f(a)$ doesn't exist!).

Not the answer you're looking for? Browse other questions tagged multivariable-calculus derivatives partial-derivative vector-analysis or ask your own question.