Can we prove this geometry question without too much calculation?

Can we prove the following geometry question without too much calculation? 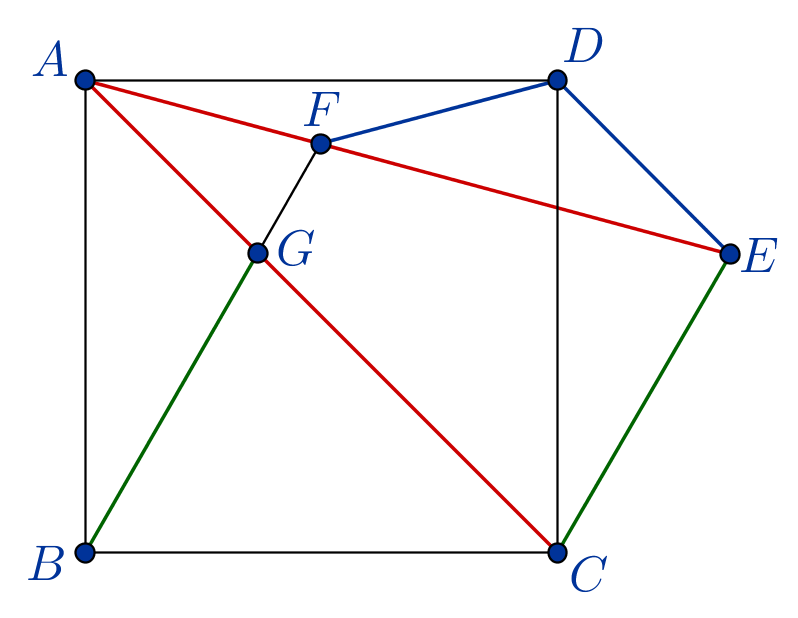 It looks to be related with a dissection of a dodecagon in three squares:

This answer owes much to Jack D'Aurizio's accurate diagram, and his observation that $\widehat{CAE} = 30^\circ$.

I'll repeat his diagram here, for ease of reference when following the first part of the proof:

In order to determine the location of the point $E$, whose uniqueness will be shown later, suppose first for the sake of argument that the claimed proposition is true.

(If you're happy to accept a rabbit out of a hat, you can skip this part of the argument - it's not strictly part of the proof at all - and start from the construction of points $F$, $G$, and $E$ by method (3) below.)

Using again the fact that $GEDA$ is a parallelogram, we have $AG = DE$.

This confirms what Jack D'Aurizio's diagram suggests, viz. that $F$ is the apex of an equilateral triangle erected on $BC$ as base.

We can construct $E$: (1) by producing $AF$ to a distance equal to $AC$; or alternatively, (2) by obtaining $G$ as the point of intersection of $AC$ with $BF$, and then completing the parallelogram $BCEG$; or yet again, (3) by constructing another equilateral triangle inside the square erected on side $CD$ to the right of the square $ABCD$ shown, and constructing $E$ inside that square, in the same way as $G$ inside $ABCD$.

Forget now that we were assuming that the claimed proposition is true, and start afresh!

Please excuse this shamefully low-tech figure, but I'm not up to speed with drawing figures digitally: 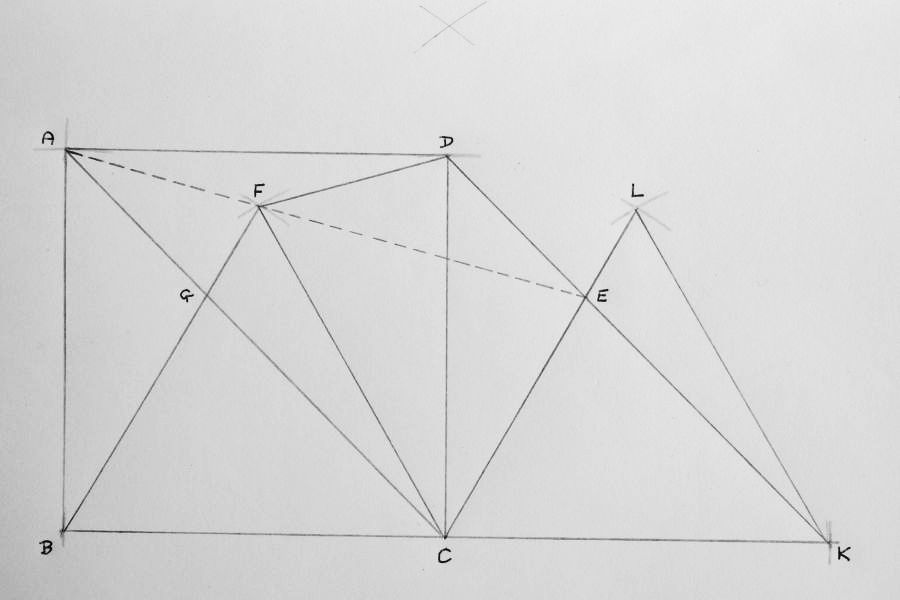 Construct $F$ as the apex of an equilateral triangle $\triangle BCF$ erected on $BC$ as base. Draw $AC$ intersecting $BF$ in $G$.

(In fact, the three lines $DK$, $CL$, and $AF$ produced are concurrent, but we don't know that yet, whence the use of a dashed line in the diagram.)

Arguing in roughly the reverse order to before, we now know that:

We use this fact in two ways:

Putting these three equations together, we get $DE = AG = AF = DF$.

We are now ready to make the second deduction from the fact that $\triangle AGF$ is isosceles:

From the construction of the points $E$, $F$, and $G$ using equilateral triangles standing on the line $BC$ produced (to $K$), because the lines $CE$ and $GF$ are parallel (they both make angle $60^\circ$ with the line $BCK$), the triangles $\triangle ACE$ and $\triangle AGF$ are similar. Therefore $\triangle ACE$ is isosceles, so $AE = AC$.

Therefore, with this particular construction of the points $E$, $F$, and $G$, all four of the conditions of the problem are satisfied. So is its conclusion, because, as has already been remarked (in the course of proving that the triangles $\triangle ACE$ and $\triangle AGF$ are similar), $BG \parallel CE$.

I was going to complete the argument by arguing that if the circle with centre $A$ and radius $AC$ intersects the line $AD$ produced at the point $M$, and if a point $P$ is taken anywhere on the arc $MC$, and then a point $Q$ constructed on the radius $AP$ with $DQ = DP$, and finally a point $R$ constructed as the intersection of $BQ$ with $AP$, the length $BR$ can be shown to increase strictly as $P$ moves from $M$ to $C$ (a loose form of words which can be dispensed with), while the length $CP$ decreases strictly, so the point $P = E$ is the only one where $BR = CP$. It follows that there is only one triple of points ($E$, $F$, $G$) satisfying the conditions of the problem; and then also $BG \parallel CE$.

But I see that dxiv has now posted an answer which ends with the same argument. I'd still like to spell this part of the proof out in more detail, but it can wait, and this answer is already long enough!

The following will (1) solve a closely related problem, then (2) show that it's equivalent to the one originally posed.

(1) Using the same picture as posted but with a different construction, let $ABCD$ be the square, and $G$ a point on the diagonal $AC$. Define point $E$ such as $GE$ is parallel to $BC$ and $GE=BC$ (so that both $BCEG$ and $AGED$ are parallelograms). Let $F$ be the intersection of $BG$ and $AE$.

It will be proved that: there exists a unique point G for which $AE = AC$, and for that point (only) it also holds true that $DF = DE$.

Calculations work out relatively easy in a complex plane set with the origin at A, and unit $AD$ along the real axis. Then (using $z$ for the complex number associated with point $Z$):

This is not an answer, but an extended comment, to which I hope others will contribute. (Alternatively, it might be a good idea to ask a separate question on Kurschak's Theorem.)

This rough diagram (again I apologise for the lack of technical quality) is what I take to be Kurschak's dissection of one-third of a regular dodecagon of circumradius $R$, into a square of side $R$, proving that the area of the dodecagon is $3R^2$. (This surely ought to count as one of the most memorable results in mathematics, yet I'd never heard of it, until reading Jack D'Aurizio's answer to this question.) 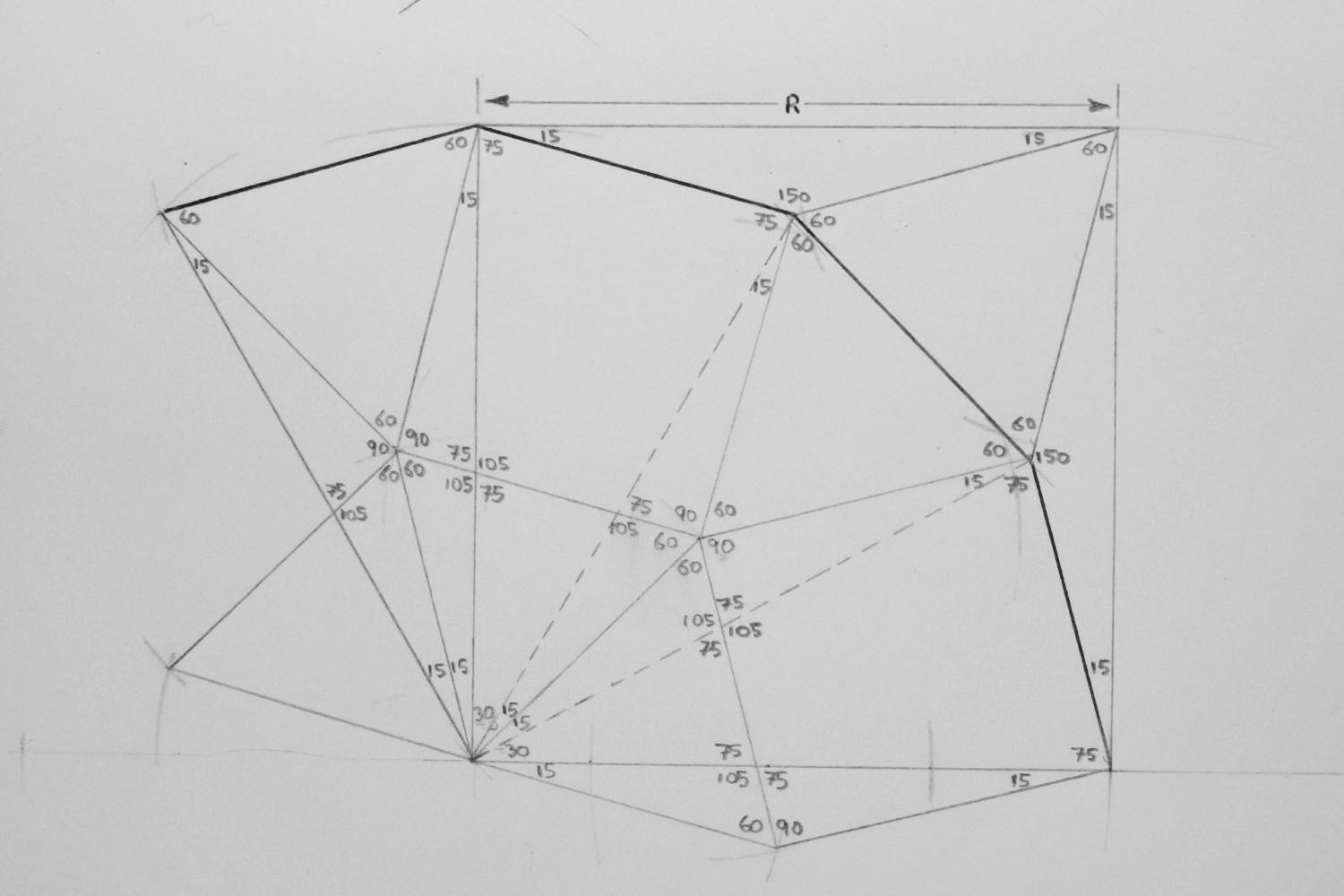 I do see something resembling the figure $ADFB$ from the question (similarly oriented within the large square here), but nothing seems to correspond to the points $G$ or $E$.

Staring from the unit square (ABCD) with G being a point on the diagonal AC, I will use a “reverse” approach by accepting BG = CE and assuming the result of BG // CE.

At this stage, G can slides freely along AC. E and other connected points and lines move along correspondingly. However, those mentioned triangle pairs (with J to J' and E to E' etc.); remain congruent. All these can be seen in the following figure. 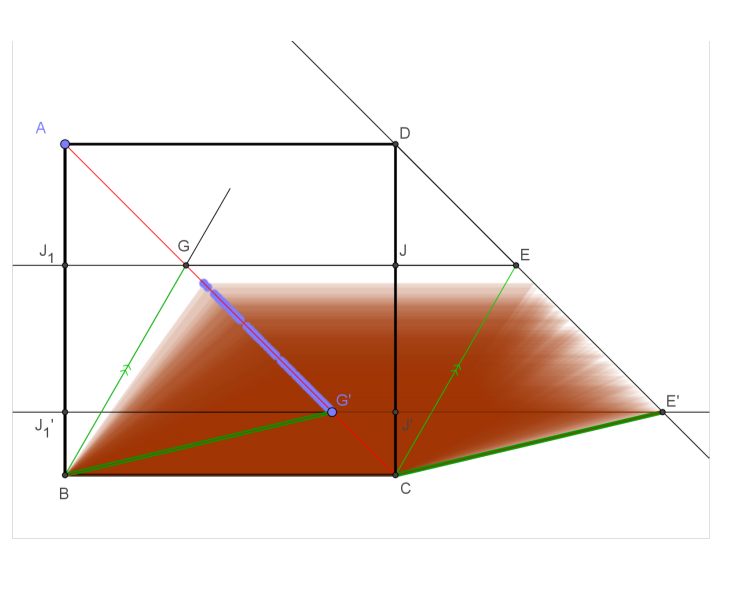 The condition that fixes the point G is AE whose length is given to be the same as AC ($=\sqrt 2$).

If $AJ_1 = x$, other lines will have their lengths marked as shown. 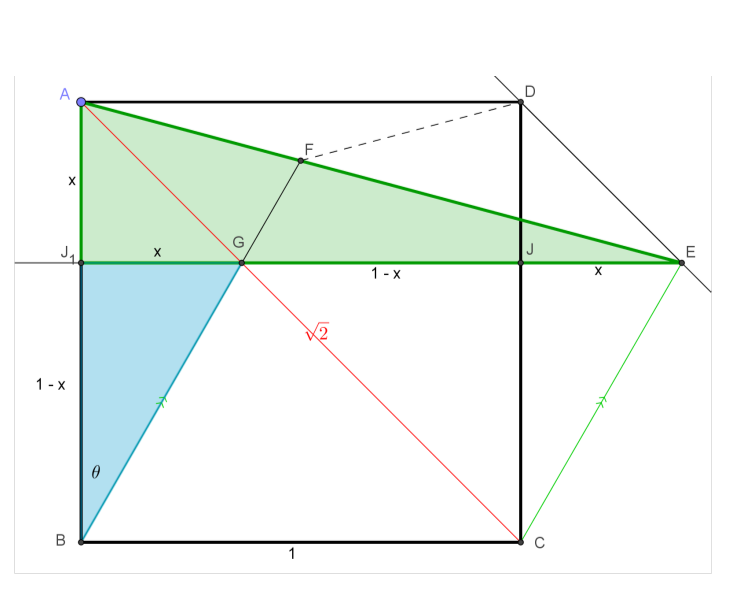 Once $\theta$ is found to be $30^0$, the problem can be tackled much easier with that piece of additional information. In fact, it becomes a problem (at least part of it) that can be found in many geometry text.

1
How to prove the quadrilateral formed by bisectors of a parallelogram is not always square?
1
SU(3) geometry, without (too much) algebra
2
In Neutral Geometry, prove that the opposite sides of a rectangle are congruent.
1
Geometry Question about Area and surface
1
Miquel Point of Cyclic Quad
3
Is there a solution to this problem that doesn't involve too much analytic geometry?
0
An Euclidean geometry question with circles.
0
Square-related Geometry question
4
Is it possible to prove the independence of the parallel postulate without non-euclidean geometry?