Why does the Chaos Game generate a fractal?

To generate the Sierpinski triangle illustrated below, there are at least $3$ approaches:

It makes sense to me why the first two approaches generate the same set: roughly speaking, the random IFS algorithm applies the same sequence of transformations as the deterministic one, but in a different order. What I don't understand is why the Chaos game produces the same result, without using any information from the transformations $T_1,T_2,T_3$, hence my question:

Why does the Chaos Game on a triangle generate the Sierpinski triangle? Given that the Random IFS algorithm is a generalization of the Chaos game, how can we relate the two methods ? 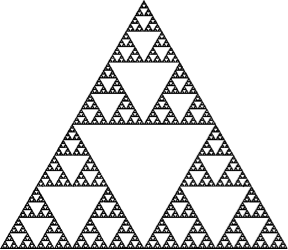 When you perform the chaos game, you actually perform transformations $T_1,T_2$, and $T_3$.

You've already got an answer, so I'll just give you another way to look at it using barycentric coordinates.

Not the answer you're looking for? Browse other questions tagged algorithms fractals chaos-theory chaos-game or ask your own question.

42
Why does this distribution of polynomial roots resemble a collection of affine IFS fractals?
2
Examples of Fractals From Simple Algorithms
1
If the Chaos Game result is a Sierpinski attractor when the random seed is a sequence (Möbius function), does it imply that the sequence is random?
2
Is this a valid example of a non-euclidean Sierpinski attractor?
0
Is Fractal Dimension Really Enough to Diagnose Chaos?
1
Why does $\det(M_{T_i})$ represent the area contraction factor of affine transformation $T_i$?
3
How to optimally adjust the probabilities for the random IFS algorithm?
3
Chaos game to get specific fractal