About a mysterious sequence who seems to follow some patterns

This question is maybe linked to this other question.

We can prove using the density of some additives sub-groups of $\mathbb R$ that we can approach an integer with a rational of the form $\displaystyle \frac{2^a}{3^b}$.

For a given integer $n$, let's get interesting of the approximation of this form with $b \ge 0$ and $a$ minimal:

where $\lfloor.\rfloor$ denotes the floor function.

The term minimal here is meaning that we are interesting in a couple $(a,b)$ like that, such that every other $(a',b')$ couple like that won't match the condition if $a'<a$.

With that being said, let's look up at what this sequence look like. 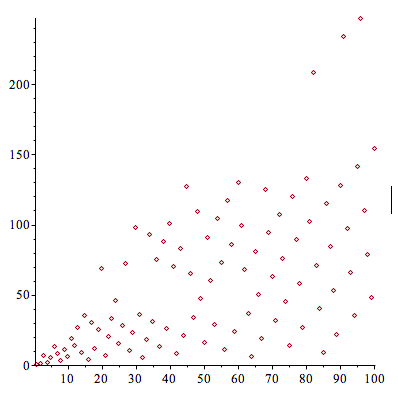 From these two first graphs of the poids $p$, we can see some kind of patterns. Which seems at the same time very regular and predictable, but also a little random, with holes and extra unexpected points.

But let's look up the sequence a little further.

We now see a huge explosion of the poids around $1000$, a pattern getting more and more regular on the bottom, and apparent randomness on the top. And something which look like a gap just a little before $2000$.

We must scale down to see the big picture.

What a different graph. There is a pattern of waves appearing now above the initial bottom (we can clearly see the $1000$ explosion now). The wave-pattern seems to get more regular with $n$ growing.

To understand if it goes like this forever, we need to scale down even more.

Now the wave-pattern is disappearing around $15000$ to another kind of pattern.

We have another explosion of the poids a little before $24000$.

Let's go further (but don't take credit of the $x$-axis, it is wrong, my bad... I couldn't display the full picture, computation starting to get really big at this point).

I have personally trouble imagining we are looking at the very same sequence at this point. We know have two layers, just like we did right after the first explosion at $1000$. A very regular layer on the bottom, and some beautiful waves on the top. The waves gaining one "wave" each time they appear.

Finally we highlighted the multiple of $2$, $3$, $5$, and $6$, and some interesting things can be observed. We also highlighted the prime numbers as a curiosity, but I found nothing from there.

Well, now that we had a good look at this amazing sequence, let's try to do some maths.

Here it is what I've proven so far (not much i fear, but I can send you proofs if requested).

I haven't actually proven the following, but i do think it's true:

I have a lot of questions about this sequence, and I hope you do to. Anything which could help understand this sequence better, and any result about it would be much appreciated.

As requested, I am going to ask some specifics questions. Though any result would be great.

which would be valid "most of the time". I don't succeed in producing a proof though.

I would like to know what is the function being the better upper bound (it looks like a combinaison of several logarithms).

I'm answering a heuristic question, so I won't go out of my way to be too precise. Roughly speaking, the explosions you are looking at have to do with the continued fraction of $\log3 / \log2$.

The explosions are due to the fact that the window is narrowing. They correspond to rapid increases in the answer to the following question: given $x$, how big do we need to let $a$ to be, in order for all gaps between the values of $a\log2 + b\log3$ to be smaller $\varepsilon(x)$?

At first, the size of the biggest gap shrinks down from $1$ by $\alpha^{-1}$ of a full circle each time you increase $A$ by 1. But eventually at step $A_1 = \lfloor \alpha \rfloor$ you wrap around and the smallest gaps begin shrinking by $1-A_1/\alpha$ full rotations instead, and it takes $A_1$ steps to shrink them all. Eventually you suffer another slowdown, and another, and so on. Note that if $\alpha$ were rational then eventually you would end up right back where you started, and the gaps would stop shrinking entirely.

You suffer a severe slowdown when you happen to hit a particularly good rational approximation $A/B$ of $\alpha$; a convergent of the continued fraction of $\alpha$. At a time like that, making $A$ rotations by $\alpha^{-1}$ brings you particularly close to an integer number $B$ full rotations around the circle, and the rate at which our gaps shrink drops to an amount of $A\alpha^{-1} - B$ full rotations every $A$ steps, and that's how big the largest gaps will be at the next slowdown.

Heuristically, the upper bound you're looking for is one where $p$ is a piecewise linear function of $1/n$, interpolating between the explosions. Particularly big explosions will occur when you have particularly good rational approximations of $\alpha$, i.e. when you have particularly large terms in the continued fraction. The limiting case of this is when $\alpha$ turns out to be rational, in which case $p$ won't even be well-defined past a certain point. (Though of course you'd need numbers other than 2 and 3 in the definition to see this happen.)