In Mapping Class Group by Farb and Margalit page 22, they say:

Let $S$ be a hyperbolic surface. If a non-trivial element of $\pi_1(S)$ is represented by a loop (up to homotopy) around a puncture, then it can be made arbitrary short. Moreover, the deck transformation corresponding to such element is parabolic.

Could someone help me understanding this, please? Why the loop can be made short and why it corresponds to a parabolic element?

Let's think about the quotient of the upper half-plane by $SL_2(\mathbb Z)$. Yes, this is technically an orbifold and not an honest-to-god Riemann surface, but that ends up being irrelevant for this discussion, and this example is nice and concrete. A fundamental domain for $M = \mathbb H^2 / SL_2(\mathbb Z)$ is the vertically-infinite strip pictured below: 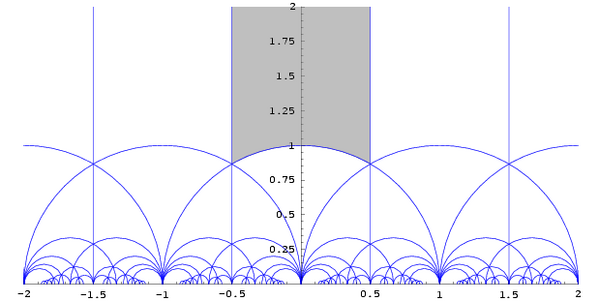 The action of $$ P = \left(\begin{array}{cc}1 & 1 \\ 0 & 1 \end{array} \right)\in SL_2(\mathbb Z) $$ identifies the two vertical sides. The action of $SL_2(\mathbb Z)$ also identifies the right and left halves of the circular segment; this is where the orbifold points come in. Luckily, all that we're going to talk about happens high up in the upper half-plane, far away from any orbifold points, so we can safely pretend that we are in the more familiar setting of Riemann surfaces. Since the vertical sides are identified under the action of $P$, the image of any horizontal line $y = c$ for $c > 1$ descends to a loop in $M$; any two such loops are freely homotopic.

Recall that the metric on the upper half-plane is given by $$ ds^2 = \frac{dx^2 + dy^2}{y^2}; $$ this means that as you move up in the plane, distances get smaller and smaller. In fact, the length of the loop $y = c$ is easily seen to be $1/c$, so that there is no lower bound to lengths of curves in this free homotopy class. Moreover, this loop is homotopic to a puncture. This is perhaps more easily seen by considering a different fundamental domain, one with its cusp point on the real line. This is an example of the first phenomenon, that loops encircling punctures in hyperbolic surfaces get short.

Remember that (free) homotopy classes of loops correspond to (conjugacy classes of) elements in the fundamental group. Under this correspondence, we identify a loop with the deck transformation that "moves along the loop" in the universal cover. In the case of our $y = c$ loop, the corresponding deck transformation is our old friend $P$. Since the trace of $P$ is $2$, it is a parabolic element.

EDIT: In response to the OP's comment, let's talk about the general case. We'll address the second question first. By the classification of isometries on the hyperbolic plane, the parabolic isometries are characterized as being those whose infimal translation length is zero, but for which this infimum is not realized. (Under the translation-length classification, elliptic isometries are those that have infimal translation length zero which is realized, and hyperbolic isometries are those with nonzero infimal translation length). Under the correspondence between homotopy classes of loops and deck transformations, we identify a loop with the deck transformation that moves the fundamental region containing the initial point of a lift of a loop to the terminal point. In our above example, the horizontal loop lifts to a segment whose endpoints lie in horizontally adjacent fundamental domains, so our deck transformation is $P$. Via this identification, it is immediate that those free homotopy classes of loops that can be made arbitrarily short are precisely those corresponding to parabolic deck transformations.

Now let's think about why loops that encircle a puncture in a hyperbolic surface can always be made arbitrarily short. To say that we have a hyperbolic surface is to say that our surface is the quotient of the hyperbolic plane by a discrete group of isometries, so that we can take a fundamental domain for our surface. This will be a geodesic polygon, possibly with some vertices on the boundary at infinity. If our surface is punctured, then in particular it is noncompact, so that our fundamental domain is noncompact as well. This forces at least one of the vertices to be at infinity, and this will correspond to a puncture. Now you can check using the metric that the width of the polygon near one of these cusps goes to zero, so that the length of a curve encircling this puncture must go to zero as well.

Not the answer you're looking for? Browse other questions tagged algebraic-topology riemannian-geometry riemann-surfaces hyperbolic-geometry or ask your own question.