As you know, before symbolic notations were introduced and adopted by the mathematical community, even simple statements were written in a very complicated manner because the writer had (nearly) only words to describe an equation or a result.

What is an example of a very simple math statement in old literature which is, verbatim, a pain to understand?

See Tartaglia's formula for the cubic equation, which is a poem with over 20 lines. (http://www.maa.org/press/periodicals/convergence/how-tartaglia-solved-the-cubic-equation-tartaglias-poem)

Admittedly, the cubic formula isn't "simple", but it is still simpler in the modern notation compared to ancient notation.

For comparison, the solution of $x^3+px=q$ (lines 1–9) given in modern notation in the above article is:

This is the computation of the weight of a copper icosahedral shell (that is, the weight of 20 equilateral triangular copper plates, all of the same thickness), done in during the Kaassite period in Mesopotamia, in the second half of the second millennium BC. 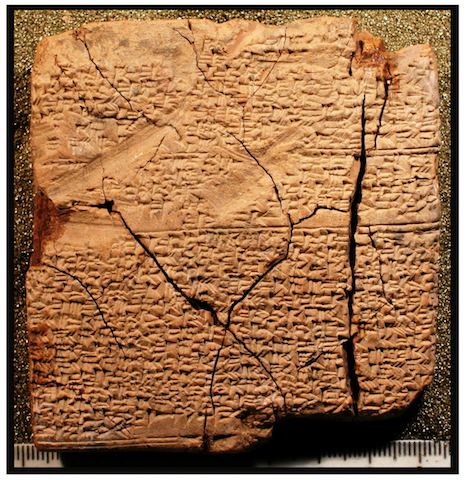 The image comes from an article in the AMS Notices, A Remarkable Collection of Babylonian Mathematical Texts.

"If as many numbers as we please beginning from a unit are set out continuously in double proportion until the sum of all becomes prime, and if the sum multiplied into the last makes some number, then the product is perfect"

Classical Chinese Mathematics was usually presented completely using text, though diagrams and rod numerals were sometimes used. As an example, here is the first problem from 海島算經, "The Sea Island Mathematical Manual" 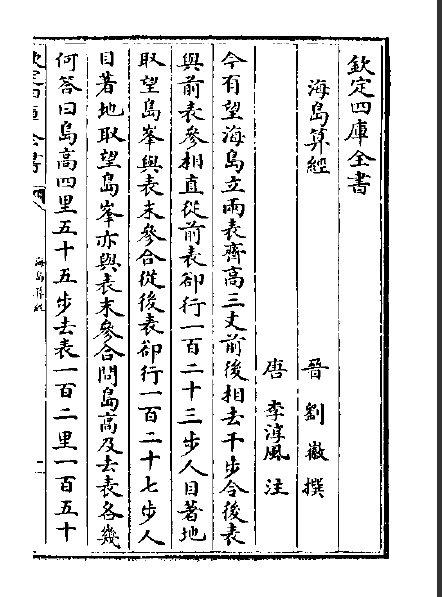 As with all texts prior to the twentieth century, it is written in Literary Chinese, distinguished from vernacular Chinese by its conciseness (like Latin), pro-dropness and lack of comprehensibility to commoners. There is also no punctuation, so experience with Literary Chinese is needed to read the original text without struggling. Chinese text (with punctuation) is here.

In today's notation, the result for the island height is

while the distance to the island from the front pillar is

Expressing the solution is already complicated enough; I wonder how it was derived.

@WillR While the Chinese Remainder Theorem would be very interesting to compare, it is too big a task (blocks 4 to 25 here) for me to do now. Maybe some other time.

About a year ago (2015) I happened to get a little known book that in one place deals tangentially with what you're asking. I don't remember how I even learned about this book, but at that time I managed to find a copy to buy on the internet.

The following excerpt is from pp. 48-49 of this book, and this excerpt consists of the first few sentences of the chapter titled “Shams” (pp. 48-69), which is the complete text of a lecture, with the same title, that Hope-Jones gave in 1948 at the Fifty-second Presidential Address of The Friends’ Guild of Teachers.

Probably not many of you have learnt the Propositions in Euclid's 2nd Book of the Elements of Geometry. In the modern world we make these far more concise and intelligible by the use of Algebra, which I define as “a way of making things more workable by giving them short names”. But the earliest Algebra that has come down to us dates from Diophantus, who lived some seven centuries after Euclid; and for want [= lack] of a way of making things more workable by giving them short names, Euclid enunciated portentously indigestible propositions such as “If a straight line be bisected and produced to any point, the square on the whole line thus produced and the square on the part of it produced are together double of the square of half the line bisected and of the square of the line made up of the half and the part produced.”* [Note: Footnote * is $(2a+b)^2 + b^2 = 2\left\{a^2 + (a+b)^2 \right\}.$] Fifty years ago we were expected not only to learn this sort of stuff (which I never succeeded in doing) but also to do questions on it in the same style. And this is how the questions were set, done and dealt with [= created by the teacher, solved by the students, and inspected/checked by the teacher]. First, the master did a simple piece of Algebra secretly. Second, he dressed it up in the asphyxiating geometrical language which was thought at that time to be “consistent with the dignity of the subject”. Third, he set it in this form to the boys. Fourth, the boys translated it into Algebra so as to find out what it meant. Fifth, they solved the thing very easily by Algebra. Sixth, they translated their solutions into geometrical language consistent with the dignity of the subject. Seventh, they showed up their finished product to the master. Eighth, the master took their solutions away and translated them back into Algebra, being the only way in which he could find out what they were about. Of these eight processes, you will see that four are mere translation, not concerned with the inventing, solving or correcting of the question, but only with satisfying some arbitrary convention of decency which the master probably no more believed in than we did $[\;\cdots \;]$ In fact all this abysmal inefficiency and the boredom which it induced was nothing but a gigantic human sacrifice to the god of Sham.

Dehn's solution in 1900-1901 of the Hilbert 3rd problem lacked the notation and theory of tensor products. This complicates things because the solution is completely tensor-theoretic: view the polyhedron as an element of (space of edges) $\otimes$ (group of dihedral angles).

Much of basic linear algebra was discovered in the absence of adequate language and notation.

There was no notation at the time to write $\det(AB)=\det(A)\det(B)$ since "$AB$" was a "multiplication" of things that were not codified yet. The volume interpretation of determinant was not available. Thus neither the proper statement nor the intuitive proof of that statement were possible.

Euler had a lot of work on what we would now call orthogonal matrices, quadratic forms and sum of squares identities. Much of this was abstruse-looking but becomes almost trivial with the ability to write words like "quaternions" or use matrix notation and some linear algebra.

This is not completely related, but in the same spirit: before the standard notation of exponentation, Robert Recorde suggested the phrase zenzizenzizenzike to represent eighth powers. He wrote that it "doeth represent the square of squares squaredly" - the term essentially is just the word for square three times.

Some old formula-based subjects like special functions, umbral calculus and $q$-identities have statements that are often hard to understand or prove in the original, but simple to explain using algebraic theories and notation that developed in the 20th century.

b) If one thing is in fact older than another, it would be impossible for it to become older still by an amount greater than its original difference in age; and again, what is younger cannot become still younger. For adding equals to unequals, in time or anything else whatever, always makes the difference equal in the amount by which the unequals originally differed.

c) So what is would never be becoming older or younger than the unity which is, since the difference in age is ever equal: it is and has become older, and the other younger, but is not becoming so.

So unity, since it is, is never becoming older or younger than the other things which are.

Consider then whether it is becoming older and younger in this way.

d) Consider then again: if we add equal time to greater and less time, will the greater differ from the less by an equal (proportional) part or a smaller one?

By a smaller one.

So whatever difference in age there was to begin with between unity and the others will not continue into the future, but since unity takes time equal to the others it will always differ from them in age less than before. Agreed?

In modern notation: as two people age together, the difference in their ages will be a constant, but the ratio of their ages will tend towards $1:1$. So letting $a$ and $b$ be their ages with $a>b$, and $e$ the equal time added to both, then

George Abram Miller (31 July 1863 – 10 February 1951) was an early group theorist whose many papers and texts were considered important by his contemporaries, but are now mostly considered only of historical importance. Much of his work consisted of classifying groups satisfying some condition, such as having a small number of prime divisors or small order or having a small permutation representation, or enumerating the possible finite groups which satisfy given conditions such as: the prime factors which divide the order, the orders of two generating permutations and their product; the types of subgroups; or the degree of a representation as a permutation group. Several papers investigate groups generated by two elements satisfying given conditions. For example he considered groups generated by two elements of order three whose product is of order four or three or six. He also considered permutation groups of small degree, groups having a small number of conjugacy classes, multiply transitive groups, and characteristic subgroups of finite groups. He found the list of all possible groups of order 1909 to 1919 inclusive. His Collected Works were published in five very large volumes. His style however, was very much aimed at using words, rather than symbols and formulas. No wonder that his collected works are so voluminous. He also use old group theory terminology (an element of a group is called an operator, a normal subgroups is called invariant, and more, etc.). See for instance this: 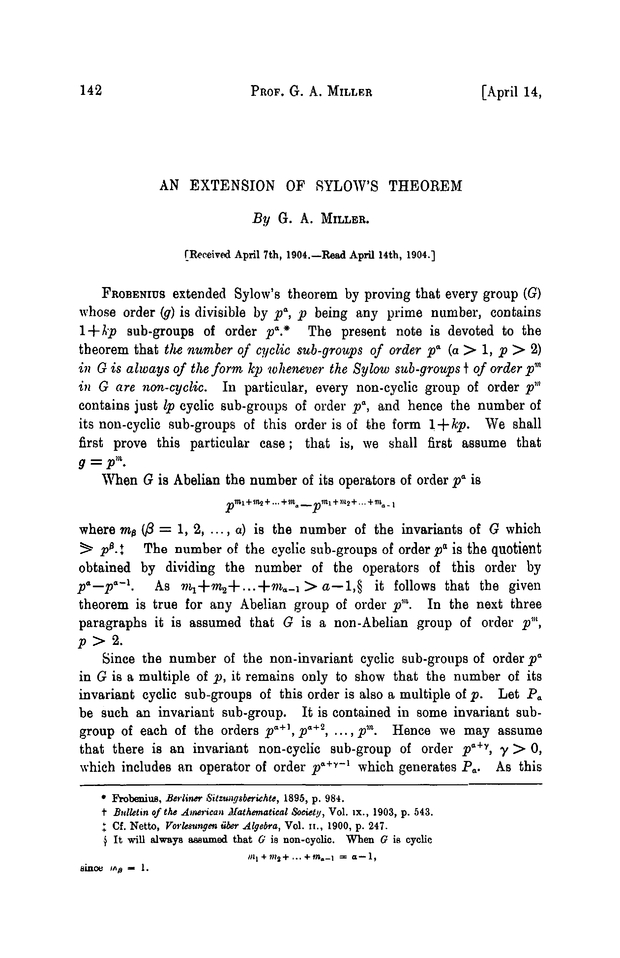 The statement of the Pythagorean Theorem always seems to confuse high school students (at least the ones in my classes): "The square of the hypotenuse is equal to the sum of the squares of the other two sides."

Euclid - "a point is that which has no part"

Not the answer you're looking for? Browse other questions tagged notation terminology math-history or ask your own question.

57
How hard is the proof of $\pi$ or $e$ being transcendental?
111
How Do You Actually Do Your Mathematics?
135
Why does mathematical convention deal so ineptly with multisets?
8
References on Mathematics of the Vikings
4
What is a simple to understand example (i.e. adjacency matrix) of a vertex transitive graph?
1
Notation convention for distinguishing uses of equal sign when manipulating equations
6
The Infinitely Nested Radicals Problem and Ramanujan's wondrous formula
0
How to compactly write a simple set for 2 variables when second variable may have same properties as first or it may optionally be positive infinity?