Given the definition of implication, I understand why this is true, but I need a bit of help showing this with a formal proof using rules like $\lor-\text{Elim}$ and $\bot-\text{Intro}$.

I'll leave you to fill in the blanks, which should be easy. See this post for a brief description of the general method to discovering such a proof. Sometimes it can be convenient to use LEM (law of excluded middle) to split cases in a clever manner to shorten the proof, but that way requires some experience.

As for the interesting side question of whether or not one can prove the equivalence in intuitionistic logic, which has the same inference rules except without DNE (double negation elimination), and hence LEM does not hold, the answer is that indeed it cannot be done. Note that the above proof only uses DNE once. Feel free to ignore the rest of this post if you are not interested in intuitionistic logic.

The reverse direction is straightforward:

The OP is looking for the following:

Given the definition of implication, I understand why this is true, but I need a bit of help showing this with a formal proof using rules like ∨−Elim and ⊥−Intro.

The following proof uses disjunction elimination ("∨−Elim" or "vE") on line 20 and negation introduction ("⊥−Intro" or "⊥I") on lines 6 and 21. 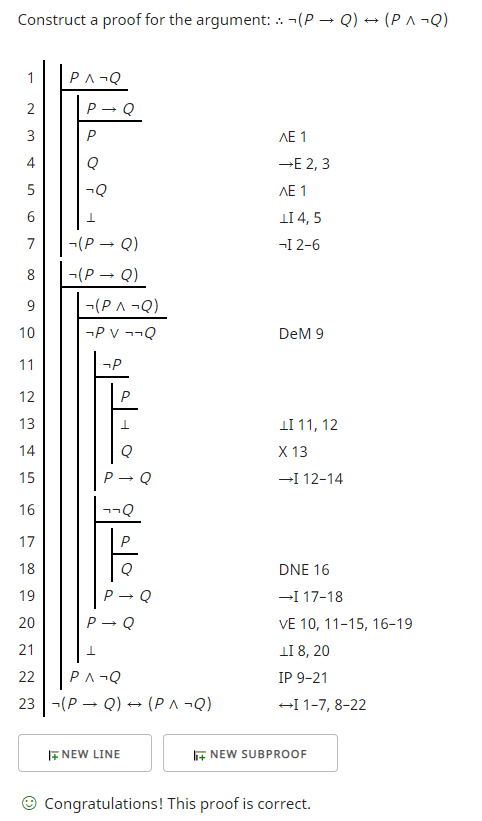 For a description of the justification used see the text forallx and the associated proof checker referenced below.

Not the answer you're looking for? Browse other questions tagged logic first-order-logic natural-deduction or ask your own question.

64
Are proofs by contradiction really logical?
8
Intuitionistic logic plus $A → B \lor C \vdash ( A → B ) \lor ( A → C )$
2
Natural deduction proof / Formal proof : Complicated conclusion with no premise