Is there a simple geometric example of unequal left and right cosets?

Does anyone know a simple geometric example of unequal left and right cosets?

Specifically I am looking for a non-abelian group which can be realized in $\mathbb{R}^2$ or $\mathbb{R}^3$ whose subgroups and thus cosets are easy to pictorially visualize.

Such a visualization hopefully would make the fact that cosets partition the group, even in the non-abelian case, easier to internalize.

What I have tried so far:

I suspect that something like this should be possible to draw simply for one of the symmetry/dihedral groups, although I am not familiar with them enough to think off the top of my head how this would be done. For example, all of the cyclic groups are abelian.

The best candidate seems like the dihedral group of order 6, since it is the smallest non-abelian group. However, I do not really know how to visualize it, its elements, or its cosets.

The examples given here for non-abelian cosets are all non-geometric, as opposed to the affine space example which presents itself readily for abelian cosets.

Perhaps something using the cosets of SO(3) (rotations in $\mathbb{R}^3$) might also be possible.

The abelian case is very simple (and hopefully will clarify somewhat what I am looking for):

Affine spaces are precisely the cosets of vector spaces when considered as abelian groups under their addition operation.

This leads to a nice visual way to think of (abelian) cosets -- as the algebraic generalization of (hyper)planes or lines which don't pass through the origin. (image from Wikipedia) 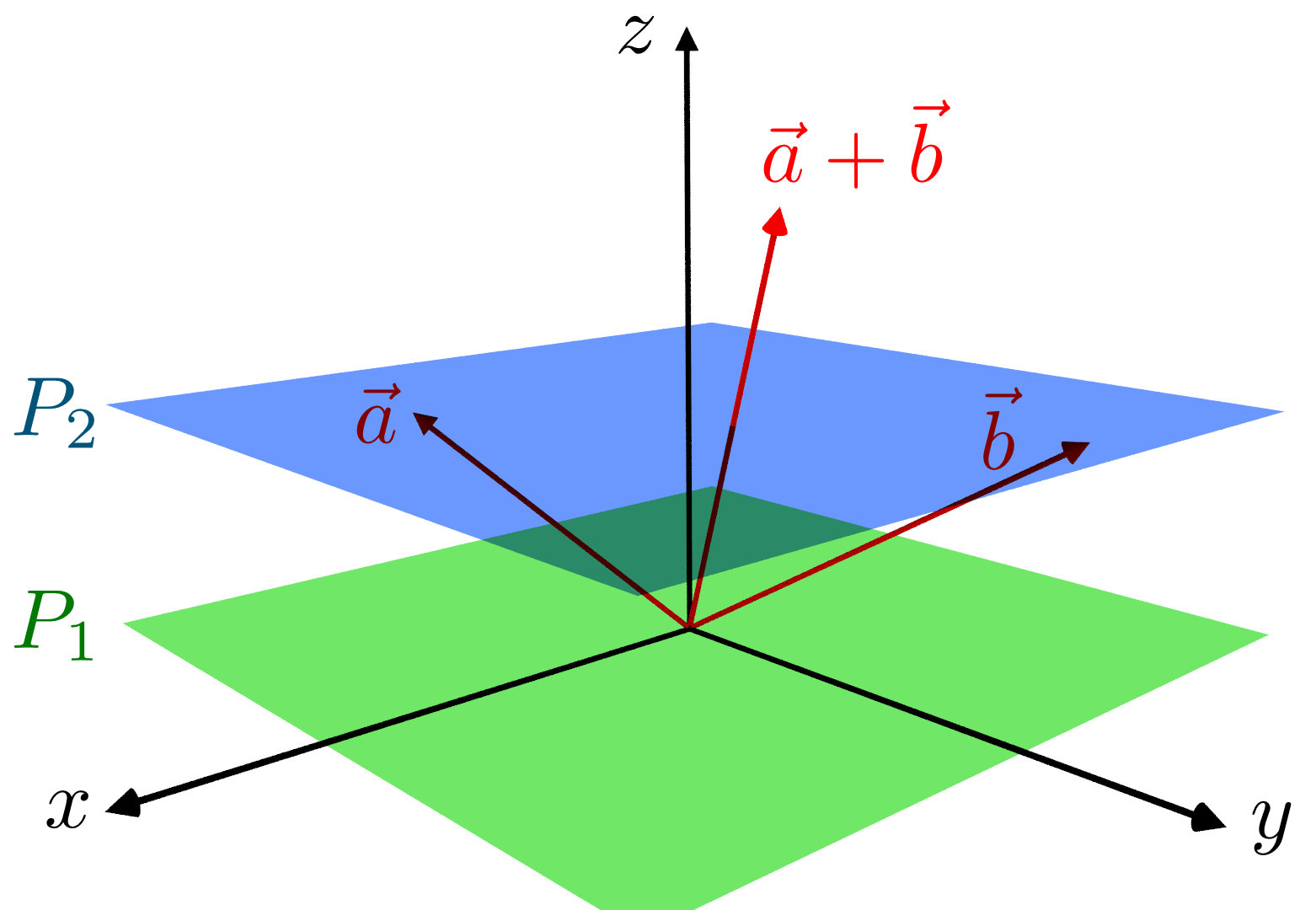 I am looking for a similarly nice visual/geometric way to think of non-abelian cosets.

I'm not sure this is what you wanted to see, but non-abelian visualizable groups to me suggest rotations. I use rotations of the cube to illustrate. The images below show the end results of elements of a certain subgroup and its left/right cosets acting on the cube. To see them as symmetries of the group you need to compare them to the "unacted" cube (corresponding to the identity element of the group of symmetries).

I arranged things so that the animations temporarily stall when it reaches a point where we have a symmetry of the cube. The rotations in-between are there to make the motion easier to see.

The first animation shows powers of a 90 degree rotation $R$ about one of the coordinate axes.

Thought differently, the animation shows (gradual) transitions $R^i\to R^{i+1}$ for natural numbers $i$. Because $R$ is of order four, the sequence repeats periodically.

The next animation shows a cyclic subgroup $K$ consisting of rotations about a 3D-diagonal of the cube. When viewed as a group of symmetries $K$ has three elements (when the rotation angle is a multiple of 120 degrees). Below I will denote this generating 120 degree rotation by $S$, so this animation shows the transitions $S^i\to S^{i+1}$ for natural numbers $i$.

The following three animations show the cosets of $K$ determined by the non-trivial powers $R,R^2,R^3$. The idea is that the cube in an initial state was first rotated by $R^j, j=1,2,3,$ and then the animation shows the effect of the subgroup $K$ on that rotated cube. For my purposes these are left cosets $R^jK$ of $K$, because I set things up so that the symmetries act on the cube from the right, and consequently here a power of $R$ is applied first. From left to right you see the transitions $RS^{i}\to RS^{i+1}$, $R^2S^{i}\to R^2S^{i+1}$ and $R^3S^i\to R^3S^{i+1}$ (somewhat synchronized).

All these transitions seem to be rotations about the same 3D-diagonal, but the colors of the visible faces indicate that they actually are distinct as symmetries of the cube. Algebraically this is explained by the fact that to get from $R^jS^i$ to $R^jS^{i+1}$ we just apply the rotation $S$, and this does not depend on the choice of the coset $R^jK$.

The last set of animations then shows the same with right cosets $KR^i,i=1,2,3$. Because this time we first perform rotations in $K$ and only the apply a power of $R$ the visual impression is that of a cube rotating about a different 3D-diagonal.

This time we see animated transitions from $S^iR^j$ to $S^{i+1}R^j$ (again $j=1,2,3$ from left to right), so the transitions amount to multiplication (from the right!) by $R^{-j}SR^j$. As we see, those symmetries are 120 degree rotations about different 3D-diagonals of the cube.

CAVEAT These cosets are not subgroups even though my animation may suggest otherwise. That is a by-product of my choice to identify an element of the symmetry group of the cube as the image gotten by letting it the element act on the cube. For example to get the subgroup of rotations about a different 3D-diagonal you need conjugates of $K$ such as $R^iKR^{-i}$.

Not the answer you're looking for? Browse other questions tagged abstract-algebra group-theory soft-question finite-groups examples-counterexamples or ask your own question.

7
Can a non-abelian subgroup be such that the right cosets equal the left cosets?
2
What are all nilpotent subgroups of the binary icosahedral group $SL(2,5)$
53
Is there a geometric idea behind Sylow's theorems?
0
Problems in Wikipedia about symmetry group of the non-equilateral isosceles triangle.
1
Simplest (smallest element) of non-cyclic abelian group
1
Number of non-abelian Groups of order 196
2
A simple example illustrating subgroup correspondence theorem
9
Why do we use G, H, and 'K' for groups?