At first thought, the question might appear to be stupid but at least for me it isn't. Note that the question asks the number of integers between two "real" numbers.

Note that there is no pattern.

How can the number of integers between two real numbers be found?

*Accepting solutions which take different cases to solve the problem.

Optional - not related directly to the question (source of the problem):

Of course, one who can spot that $-1$ is a root of the equation for any given value of the parameter $a$ can solve it without issues.

But what about in a general case where the root depends on the parameter itself?

My approach to solve the problem was as follows. Firstly, a has to be a positive integer if not, there would be infinitely many integers where the expression would turn out to be negative.

Since $a > 0$, the parabola would be open upwards (convex from bottom and concave from the top). The points were the graph intersects the $x$-axis are the roots of the equation. Any real value which lies between the roots when substituted in the expression would evaluate to a negative real number (obvious from the graph). 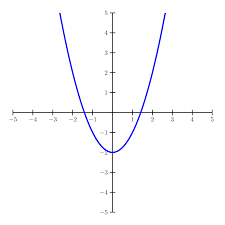 Hence, the above problem reduces to finding number of integers between the roots (which can be real) of the equation.

This would mean, the answer to the question of finding the number of integers between two real numbers should be such that conditions can be imposed.

Without loss of generality, let the numbers be $x$ and $y$ with $x\leq y$. Let $f(x,y)$ denote the function of counting how many integers are strictly between $x$ and $y$.

Let us look at each of these cases in detail and see why that is so.

Finally, looking at the second case, we see it is the same as the third case with the exception that $\lfloor y\rfloor$ will not be included in the list as $x<\lfloor y\rfloor\not < y$, so the list we formed earlier will be correct all but the final term which will be removed, reducing the count by one.

Not the answer you're looking for? Browse other questions tagged integers or ask your own question.

6
Choose integers so that average is close to given real number
3
Coloring integers: there exist 2000 consecutive integers among which 1000 of each color
1
Replacing two positive integers with sum of them until getting a single number and concluding the nature of final number.
1
What's the difference between these sets of integers?
5
What is the benefit in constructing the integers from natural numbers?
1
Find minimum of simple expression over integers