I am trying to use MATLAB's fit function to fit a curve through a data set which obviously shows an exponential decay. These are the commands I use:

It seems to me that this is clearly not the best possible fit. If I use 'exp2' instead of 'exp1', the fit is much better: [Image not linked due to restrictions on number of links.][2]

However, if I'm not wrong, a similarly good fit should be possible with 'exp1' as well. How can I achieve that?

P.S: The respective coefficients are as follows:

EDIT: I plotted the log of the intensity values over time and it looks like this: log(intensity) over time. Not exactly a straight line. So I guess the exp1 model is just not suited in this case, right?

Moreover, one can see on your graph that for the first points ( close $t=0$ ) , during a short time, the function $I(t)$ decreases more slowly than later which is not well consistent with the above function. This would require a more sophisticated model. But, in order to keep a not too sophisticated function, an approximate consists in introducing a delay $t_0$ into the above function, so that : $$I(t)=\begin{cases} I_0 & t<t_0\\ I_0\:e^{-\left(\frac{t-t_0}{\tau} \right)^\beta} & t>t_0 \end{cases}$$

A non-linear regression with 4 parameters $I_0$ , $\tau$ , $\beta$ , $t_0$ will give an excellent fitting, except close to the initial point where a slight discrepancy will remains.

Making this residual discrepancy disappear would require experimental studies and modeling of the phenomena occuring at the very beginning of the luminesce decay.

Example of regression : Below, the approximates for $I_0$ , $\tau$ , $\beta$ are certainly not the best because the coordinates of the points were imported from the Dave's graph with a rough graphical scan. 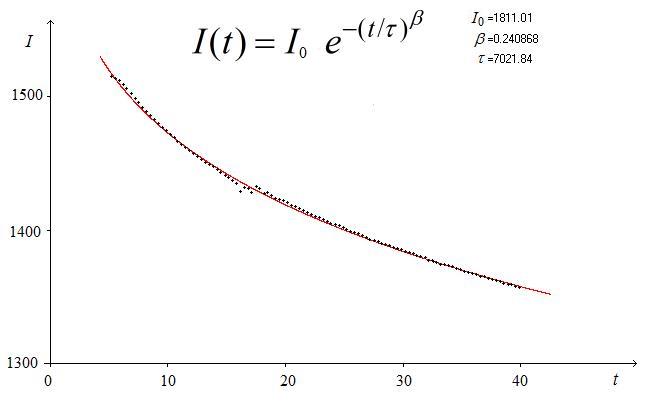 The regression was not made with an usual non-linear method.

The general principle of the method used (straightforward: without iteration nor initial guess) is explained in the paper : https://fr.scribd.com/doc/14674814/Regressions-et-equations-integrales 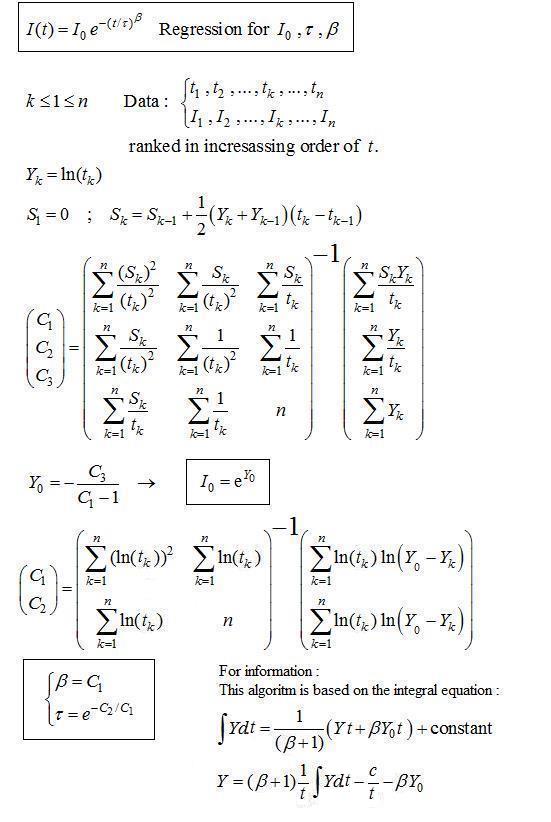 Not the answer you're looking for? Browse other questions tagged exponential-function matlab regression or ask your own question.