Name of this famous question?

I think that this question is well known but I cannot remember its name, and now I am interested in it and wanted to look it up, but cannot find anything just based on a description. If anyone knows the name or can find it (or anything similar), that would be very helpful. The question is as follows:

You have a rigid rod of unit length, and some curve in 3d space, which is linear for all but a finite portion of its length. We say the rod is "on the curve" if each of its endpoints are on the curve. Call the "ends of the curve" the 2 linear portions that are infinite. Prove or disprove that for all possible such curves, we can move the rod from one end of the curve to the other while staying on the curve the whole time.

One name in the literature is: The Ladder Movers' Problem: 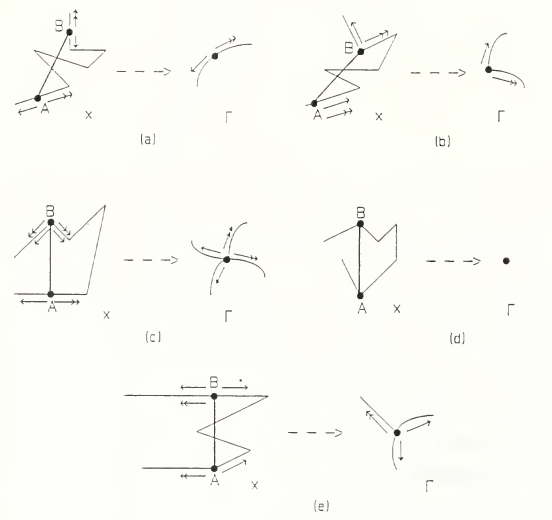 The problem seems to be surprisingly dependent on the precise assumptions we make. Consider, for example, this curve 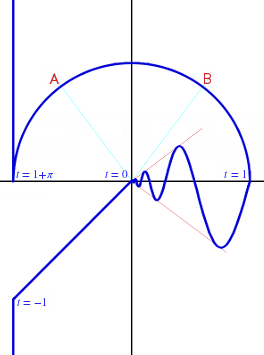 This is a continuous curve with a Lipschitz continuous parameterization (the derivative of $t\sin(\log(t))$ is bounded) and is therefore rectifiable. And the ends are in opposite directions as required.

Yet, the ladder cannot be moved continuously along the curve.

Imagine that it moves from high parameter values to low ones. Whenever the front is is at one of the points where the curve touches the upper red line ($y=\frac34x$), the back end will need to be around point $A$ on the circular arc, since that is the only place on the curve behind the front end that has the right distance from it. ($A$ is the center of the radius-$1$ circle that has $y=\frac34x$ as tangent at the origin).

Conversely, when the front end is at one of the points where the curve touches the lower red line, the back end must be around $B$. Since the front oscillates between the two red lines infinitely many times before it reaches the origin, so must the back end oscillate between $A$ and $B$. But that means that the position of the back end cannot tend to a limit while the front end approaches $(0,0)$, so a continuous movement of the ladder is impossible.

(The factors of $\frac34$ and $5$ are just there to allow the diagram to show enough of the wiggles to make it clear what is going on. It would work just as well with $t\sin(\log t)$ as with $\frac 34t\sin(5\log t)$, only not as visibly. It is important to keep the largest of the wiggles from extending beyond the unit circle, though -- otherwise the argument about where the back end of the ladder has to be won't work).

Requiring the curve to be (piecewise) smooth will probably avoid this kind of trouble.

0
References for implicit [intrinsic - I remembered wrongly] co-ordinates
0
Moving Line Segment Problem
0
Moving Line Segment Problem part 2
1
Which function describes the trace of a hinged, 2 segmented slat, with one fixed endpoint?
0
Maximise area for a given perimeter, etc. - Which branch of maths?
10
how to place a rope with a given length within an orthogonal triangle (see picture)
0
(Do Carmo) Minimum arc length for $\alpha(t)=(t,tsin(\frac{\pi}{t}))$